I got a new car just before the New Year! 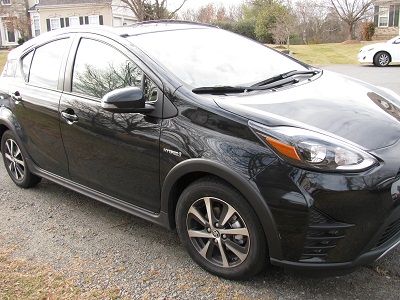 I’m naming the car “Ebenezer,” “Benny” for short, after I Samuel 7:12, where Samuel set up a stone saying, “Hitherto hath the Lord helped.”

The car is reminding me of all the things that have worked out for good lately.

And let me try to explain some of the things that came together when I bought this car.

I’ve been in a horrible black hole of credit card debt for years. Most of it started when I got divorced, and when I moved to Virginia and lost my job. But once you’re deeply in debt, it feels foolish to save, because you should be using any “extra” money to pay down credit card debt. But then when big expenses come up, you have to borrow to pay them. On top of that, any trips I took or any other splurges – I borrowed to do it. So a lot of the debt was my own fault for doing that too much.

For a few years now, along with New Year’s Goals, I’ve come up with 7 prayer requests to pray daily in the new year. Ever since I started doing that, one of the prayer requests was to get out of debt. The associated goal was always much, much less, and more realistic – to reduce the total by a few thousand. I didn’t think this was a prayer that could happen in less than 5 years.

In the next few months after borrowing that money, my car needed $2700 of repairs. I knew I couldn’t afford a new car – I wanted to wait at least until I paid off my library school student loans in November 2017 – but to pay that amount, I had to borrow – so the monthly payments got yet higher.

Then in November 2017, I paid off my student loan! Hooray! A little leeway in my budget!

But at the end of December, my car’s Check Engine light went off again. Sure enough, it would cost $5000 to fix it. Well, I didn’t have student loan payments any more. That meant I knew I could make payments, right? I did decide to buy a new car.

So that was wonderful – but I was still wondering how I’d pay for it!

It was clear that my home had gone up in value since I’d bought it almost five years ago. I checked, and some neighbors had recently sold the same model for $290,000 and $295,000. (I bought it for $255,000.) Since that meant I had more than 20% equity, I wondered if I should refinance to get rid of my mortgage insurance on my FHA loan.

Well, long story short, that wasn’t a good idea, because my first mortgage is at 3.25%. Also, I got my FHA mortgage a month before the rules changed – so my insurance will automatically go away when I hit 78% of the original purchase price – in 4 or 5 years.

But all this time I’d thought that a home equity loan would count against hitting that 78%. But because of buying the car, I looked into it and learned that isn’t the case. It turned out that the public value out there for my place came in at $277,000, without me getting an appraisal. And at this time, I qualified for exactly enough money to pay off all my credit cards and have a little money left over for a cushion. (The cushion quickly went away with a couple expenses that came up. So just exactly the right amount of money.)

Once I think about it, the timing is amazing:

My car didn’t break down until I’d paid off my student loan. If it had happened sooner, I might have kept borrowing to keep it running.

It happened at the best time to buy a new car.

It motivated me to find out about home equity loans.

It happened when I qualified for exactly the right amount to pay off my credit cards. (It’s 15-year fixed rate, so it won’t last forever, either.)

Now I realize I’m still in debt, but now it’s secured debt. And the best part is that now my budget has some room to save – so I can try with all my might to save for future big expenses and try to never get back into credit card debt again.

I applied four years earlier to be on the committee – and missed it by 15 votes. But this is a much better time. It makes my Empty Nest an asset instead of something to mope about.

Why, I’m having so much fun going to classes and talking about the Newbery committee – I realized that this even shows me that I’m happier in my current job than I would have been in the Youth Materials Selector job I applied for a few years ago and was sad not to get. In that job, it wouldn’t be a natural outgrowth to do outreach to schools – but as Youth Services Manager, that fits in beautifully. Yep, that’s worked out for good, too.

There’s ONE thing left that hasn’t worked out in my life.

I find it just plain funny how, when things are going most beautifully, on two different days that I noticed were particularly good – I caught myself thinking about that one thing left. (Oh, the ability of humans to think about what we don’t have instead of about what we do!)

It’s that I’m still single. And there are apparently no prospects for changing that.

But the truth is, it’s a lot easier to spend all my spare time reading when I’m not in a relationship. If God has worked out so many other things for good – including perfect timing – I really do believe He can work out that one, too.

And I don’t have time for a man right now, anyway!

And mind you, I’m very, very happy. (I won’t get started on how much, much, much I’m enjoying Newbery committee activities – and I’ve barely begun.)

But when I find myself going down the path of thinking about what I don’t have – my little car is now a physical reminder: Hitherto hath the Lord helped!