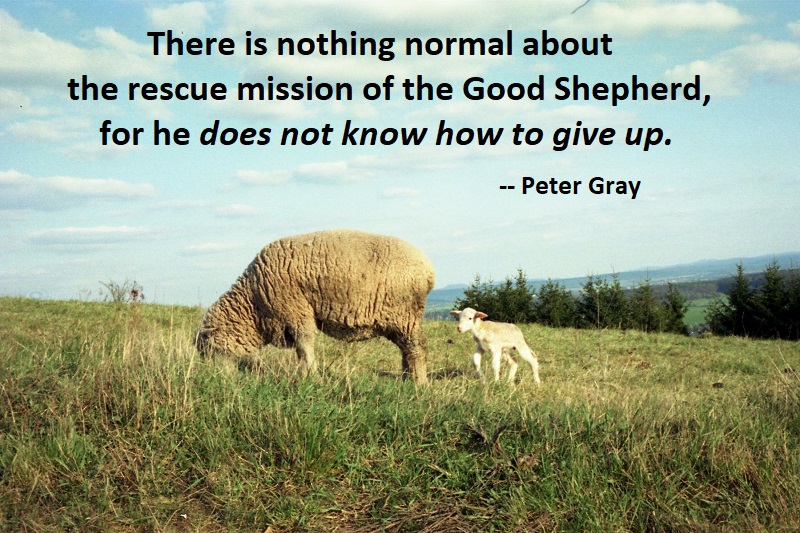 I’ve been looking forward to chapter 15 of Luke. Three parables are listed, the lost sheep, the lost coin, and the lost son. Today we read the first two:

Now the tax collectors and sinners were all gathering around to hear Jesus. But the Pharisees and the teachers of the law muttered, “This man welcomes sinners and eats with them.”

Then Jesus told them this parable: “Suppose one of you has a hundred sheep and loses one of them. Doesn’t he leave the ninety-nine in the open country and go after the lost sheep until he finds it? And when he finds it, he joyfully puts it on his shoulders and goes home. Then he calls his friends and neighbors together and says, ‘Rejoice with me; I have found my lost sheep.’ I tell you that in the same way there will be more rejoicing in heaven over one sinner who repents than over ninety-nine righteous persons who do not need to repent.

“Or suppose a woman has ten silver coins and loses one. Doesn’t she light a lamp, sweep the house and search carefully until she finds it? And when she finds it, she calls her friends and neighbors together and says, ‘Rejoice with me; I have found my lost coin.’ In the same way, I tell you, there is rejoicing in the presence of the angels of God over one sinner who repents.”

I’ve emphasized the until he finds it phrases above, because those are key words for universalists.

These parables don’t leave any room for failure. The Lord is not willing that any should perish, and He will keep searching until He finds His lost sheep. This is yet another reason I say that there is no deadline.

Yes, we saw in earlier passages that there will be judgment after death. But this judgment is spoken of as correction. Perhaps with some it is part of the process of finding that wandering sheep, of bringing it home. This Good Shepherd is not a shepherd who ever gives up.

In fact, every time we sing Cory Asbury’s song “Reckless Love” in church, I think of those I know who haven’t yet come to Jesus. Because God’s love is indeed overwhelming, never-ending, and reckless. He will indeed not be stymied by our resistance. He will keep after us until we are found, even if it takes eons.

Peter Gray wrote a booklet that he titled Until They Are Found, which I reviewed in 2010. It’s short, so I reread it before writing this post. He also asserts that this shows a shepherd who does not give up.

Here in Luke, we are presented with a vision of the Good Shepherd who searches without ceasing. Normal search and rescue operations only last a certain time; eventually they are called off, even if not everyone has been found. But there is nothing normal about the rescue mission of the Good Shepherd, for he does not know how to give up. He knows nothing of cutting his losses, for if He did, He would surely never have searched in the first instance. After all, ninety nine out of one hundred is a pretty good standard, don’t you think? Ninety nine percent might be good in our books, but it is not good enough for God. Nothing short of one hundred percent will satisfy the Good Shepherd.

Look at what Jesus says in verse 4, “Does he not leave the ninety-nine in the open country and go after the lost sheep until he finds it?” Notice that word ‘until.’ It is there deliberately. It is not by accident that Jesus does not say, “in an attempt to find it.” Jesus says that the shepherd will search until it is found, hence the title of this book. This story says nothing about not finding the lost sheep; no hint of failure is given. That there may be a sheep belonging to Him that He will never find, is a conclusion that this story precludes us from believing. Praise God!

It is Jesus who is the Good Shepherd, and the success of the search and rescue operation depends upon His skill. He sees so clearly, and intervenes so effectually, that He will most assuredly bring them in. Jesus Christ will not lose one of His sheep. True, some sheep may wander in the wilderness for a time, but to be forever lost? Never! A thought that He cannot bear. Could the Christ fail to save even one of those for whom He came and for whom He died? Impossible! Such a thought He could not endure. A defeated Christ is a Christ whom I cannot conceive of.

He makes another point from these first two parables: Neither the sheep nor the coin contributes anything to being found.

And is this not the point of using a coin as the imagery? There is absolutely no possibility of being misinterpreted. A coin cannot contribute to being found in any way. A sheep could possibly have made a sound or even walked toward the shepherd. Even though Jesus does not say any of this happened, it is possible to misinterpret Him and think the sheep did something. The point I am attempting to make is that the religious people in Jesus’ audience, who were so convinced that they contributed to their salvation, could find a way to distort the obvious meaning of the story and conclude that the sheep did do something. And so the lost sheep story is followed by the story of a lost coin, and now there is no way to be misinterpreted. A coin cannot do anything to contribute to its being found. The coin was found because the woman went looking for it — no other reason can possibly be asserted. And what’s more, the woman went looking until she found her coin. Again, Jesus chooses to use this word until. ‘Until it is found’ carries no possibility of failure. It can mean only one thing: that all who are lost shall be found.

The final story in Luke 15 is about the lost son — it shows how much the Father loves the one who is lost. We’ll read that one tomorrow.