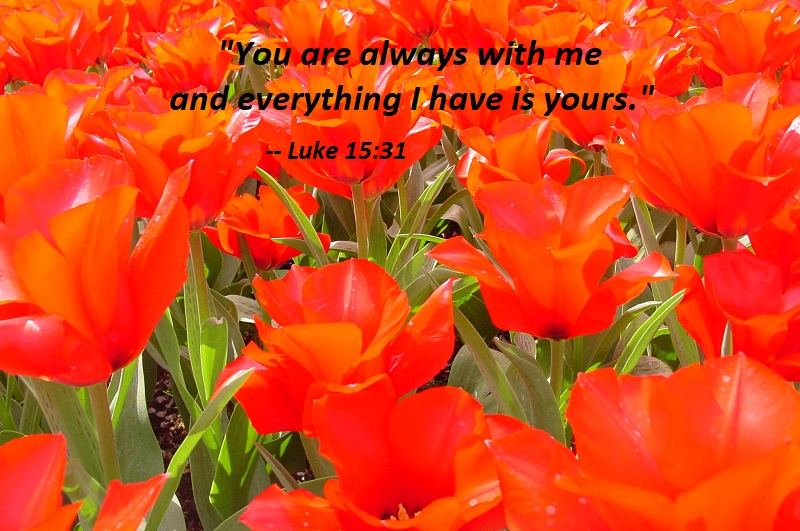 Yesterday we looked at the first two parables in Luke 15 – the lost sheep and the lost coin. Today we’re going to look at the beautiful parable of the lost son, otherwise known as the prodigal son. But as many have pointed out, the son is not the prodigal in this parable – extravagantly generous. That’s the father.

Let’s look at the story:

Jesus continued: “There was a man who had two sons. The younger one said to his father, ‘Father, give me my share of the estate.’ So he divided his property between them.

“Not long after that, the younger son got together all he had, set off for a distant country and there squandered his wealth in wild living. After he had spent everything, there was a severe famine in that whole country, and he began to be in need. So he went and hired himself out to a citizen of that country, who sent him to his fields to feed pigs. He longed to fill his stomach with the pods that the pigs were eating, but no one gave him anything.

“When he came to his senses, he said, ‘How many of my father’s hired servants have food to spare, and here I am starving to death! I will set out and go back to my father and say to him: Father, I have sinned against heaven and against you. I am no longer worthy to be called your son; make me like one of your hired servants.’ So he got up and went to his father.

“But while he was still a long way off, his father saw him and was filled with compassion for him; he ran to his son, threw his arms around him and kissed him.

“The son said to him, ‘Father, I have sinned against heaven and against you. I am no longer worthy to be called your son.’

“But the father said to his servants, ‘Quick! Bring the best robe and put it on him. Put a ring on his finger and sandals on his feet. Bring the fattened calf and kill it. Let’s have a feast and celebrate. For this son of mine was dead and is alive again; he was lost and is found.’ So they began to celebrate.

“Meanwhile, the older son was in the field. When he came near the house, he heard music and dancing. So he called one of the servants and asked him what was going on. ‘Your brother has come,’ he replied, ‘and your father has killed the fattened calf because he has him back safe and sound.’

“The older brother became angry and refused to go in. So his father went out and pleaded with him. But he answered his father, ‘Look! All these years I’ve been slaving for you and never disobeyed your orders. Yet you never gave me even a young goat so I could celebrate with my friends. But when this son of yours who has squandered your property with prostitutes comes home, you kill the fattened calf for him!’

“’My son,’ the father said, ‘you are always with me, and everything I have is yours. But we had to celebrate and be glad, because this brother of yours was dead and is alive again; he was lost and is found.’”

Before I talk about this passage and universalism, let’s think about this father. This is how much God loves you!

Notice that the father did not force someone to pay back what the son had squandered before he forgave him. He didn’t require payment of any kind. He was watching the road for his son’s return. It was the son who needed to be reconciled to his father, not the other way around.

But this is also how much God loves other people!

Let’s think for a moment about the setting of this parable. Let’s review when Jesus told it. Here’s how the chapter starts:

Now the tax collectors and sinners were all gathering around to hear Jesus. But the Pharisees and the teachers of the law muttered, “This man welcomes sinners and eats with them.”

I mentioned yesterday that the next two parables Jesus told are universalist parables. But looking at the context, the point Jesus was really making was this:

Those sinners I’m eating with are going to be welcomed in heaven with great rejoicing!

Those tax collectors and sinners who were gathering around Jesus – he was saying that his Father values them and would search for them until they were found.

And then the parable of the Lost Son – this is how much the Father loves those sinners and tax collectors – He’s eagerly watching for them and will run toward them when He sees them approaching.

Obviously, Jesus was thinking of the Pharisees when he told about the older son who didn’t want the father to celebrate after all his brother had done.

But where’s the universalism in that?

Well, suppose I’m right about the first two parables. Suppose they are saying that ALL will be saved, that the Good Shepherd will keep searching for every single lost sheep until they are found.

Don’t argue with me for a second, just assume that universalism is true and examine how you would feel.

If universalism is true – will you feel aggrieved? Will you start asking God, “What did I follow you for if you’re going to save these people in the end, anyway? Why have I been slaving for you and trying to please you – when you get excited about these miserable sinners who only deserve hell? Why did I spend my life on earth trying to follow you?”

Today is Transgender Visibility Day. If you’re convinced that being transgender is a sin (It is not – the reasons why not are a post for another day.) – will you be upset with God for welcoming them lavishly into heaven?

Will you be upset if gays and lesbians and other queer people are in heaven? People who married someone of the same gender and people who were a different gender than the one on their birth announcement? Or how about cheating husbands? Murderers and *shudder* people of the opposite political party?

If universalism is true – if our Father’s love is that big – will you be angry with God?

Back to the older brother — Notice that he has no joy in the service he’s been doing for his father. He describes his work for his father as slaving for him.

Notice also, though, the father’s answer: “You are always with me and everything I have is yours.” The elder brother didn’t have to nearly starve in the pigsty. I do believe there will be judgment, but that the Lord will win in the end. We can do it the easy way or the hard way. Those who choose to follow Jesus in this life have Him always with us and everything He has is ours.

On the surface, the younger brother is the one doing things the hard way. And yet if the elder brother is finding no joy in being with the father, he’s got a drudgery of his own.

And I suspect his pride is hurt by his little brother getting so much attention. But life with the Father isn’t about comparison. It’s not about being better than the others in our human family.

May we never begrudge anyone the lavish love of the Father – He has more than enough for all of us.