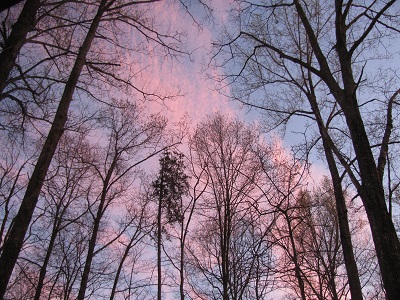 I spent three nights this week at a “Getaway” cabin. It’s a very small cabin with cooking facilities. And you get to not talk to anyone. They left a card for you to leave behind thoughts, a quote, or a picture.

Here’s what I wrote:

I sat out by the trees,
and the woods said to me,
“Shut up!”

I laid by the big window,
and the stars said to me,
“Shut up!”

And it was good.

That was my reaction to the first night. I’d brought lots of books to read and had intended to do some major planning. But when I arrived and saw the space was smaller than I’d anticipated, instead of spreading out the books and notebooks and getting to work – I went outside and read a book. 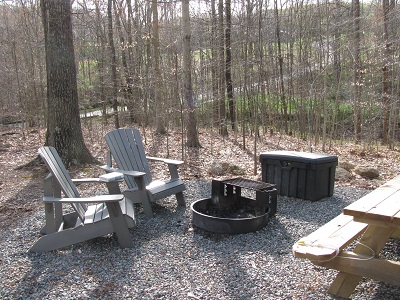 After it got dark, I laid on the bed and discovered I could see more stars through the big window than I’ve seen in a very long time. And it calmed my mind. 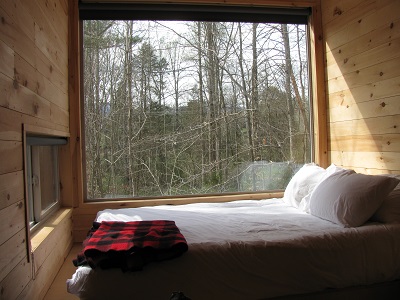 The next day, I did get busy with my getaway.

The space was smaller than I’d expected. Somehow I’d expected drawers, closets, shelves, and certainly mirrors, something more like a hotel room. This was not that. But my suitcases did work to hold my clothes. 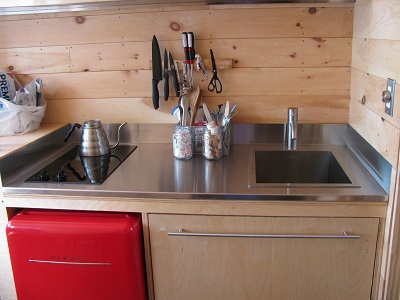 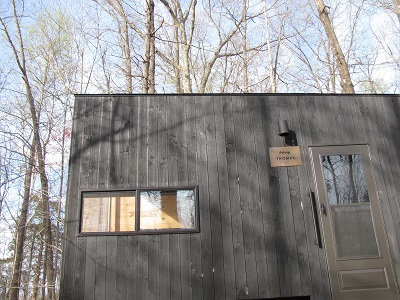 I brought far, far too many books. But I’d known I was bringing too many, and it turned out there was room to line them up so I could choose, so I could dabble in a wide variety.

There was a hiking trail and it turned out to branch into two directions. I took the first way the first day, and it eventually petered out (unless I missed a turn?), then took the second way the second day and was relieved to find the trail was a loop so I didn’t have to turn back. I did have a scary moment crossing the stream on stepping stones. People who lay out stepping stone paths generally don’t plan for people with very short legs such as me, and despite myself and despite the super shallow water, I got so scared I was shaking, and then was more afraid I wouldn’t make the step.

Believe it or not, here are the stepping stones that scared me: 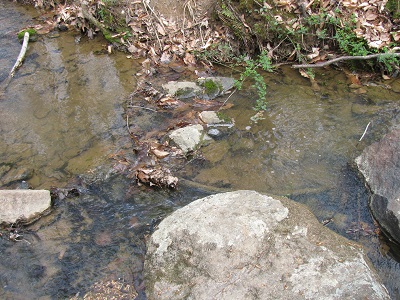 Then I went and found a walking stick, and I got my foot a little wet, but I did it! Both walks took about an hour, walks through the woods with plenty of birds singing and not seeing a single solitary human. On the first walk, I saw someone as I got back to my cabin and told her where the trail started.

In some ways, I’ve got a getaway in my own home, since I live alone. And I had a getaway all three times I went to a library conference while on the Newbery committee – since I had a large hotel room to myself.

But the gift of this place was that part of not talking to any people. I’ll admit, I did check my phone. And answered a couple of emails very briefly. But it was ideal for a place to read and write on my own agenda. I made simple meals and did not have to go out and find food, as I did when I stayed in a hotel room on Chincoteague.

My purpose in going was to decide: Do I want to take up writing again, now that my time serving on the Newbery committee is done?

The answer was an unequivocal YES.

I brought all my old writing – the three books I’ve finished, three books I’ve started, and two short stories. My plan was to read them all and decide whether there is anything to salvage out of them and what to work on next. I was also planning to think through possibilities for nonfiction writing.

I didn’t have time to read all of those. What I ended up reading was an old writing journal I’d written 1995 to 2001, when I was a mother of young kids and planned to write. Toward the end of the journal, I thought of writing Sonderbooks, and it was fun to see that idea develop.

In the journal, I was reflecting on writing books I’d been reading. And I was asserting that I am a writer.

The lovely thing, reading that now? I no longer feel the need to assert that so hard. Yes, I am a writer. Now I know it in my bones.

All the years of writing Sonderbooks reviews, of responding to life in Sonderjourneys, and especially all the friends I’ve emailed about so many big issues – about my marriage falling apart, about what directions to take, about dreams and hopes, about theology – and even writing my life story in Project 52. I’ve figured out that I think things through by writing about them. How I put it, when I apologize to friends for the long emails I send, is this: I am a writer at heart.

Whether or not I ever get a book published, I am a writer. That’s who I am.

And taking some time out to think about that reasserted that. Yes, now that the Newbery’s done, yes, I want to spend at least a half-hour a day writing. I don’t think I’m going to not count writing reviews any more (like I used to) because some day I might want to write some kind of collection of book reviews. I won’t, however, count the time it takes to post the reviews.

But yeah, I’m a writer. And thinking about adding that back into my life makes me happy.

In fact, I’m not putting this on my online profile, but it makes me a lot happier than the thought of dating someone again. Maybe I’m not discouraged after all that I’m not finding a match that way! I’m thinking out a schedule for getting that half-hour in, and maybe having a longer time once a week… and I’m not sure I’ll be real patient with anyone wanting to interrupt that.

As for what to work on – one of those short stories is a very silly story about a kid saving the world from alien invasion. I’m going to try to turn that into a beginning chapter book.

It’s a very unserious story, and I like that for my again trying to write a book.

Today I read this in the book Chapter after Chapter, by Heather Sellers:

One writer I know, Brandon, is dying to write what he calls his magnum opus, a fantasy novel that brings all of his ideas together in one stunning story. But he feels stuck as a writer, completely blocked, and he has trouble starting even small pieces. Many of his friends have told him he needs to write his magnificent book and risk failure in order to save it. The longer he sits on his project, the more blocked Brandon will become.

But he won’t start writing.

I’ve always wanted to write a great book. Reading for the Newbery, I read plenty of great books. So if I get back into it by writing a silly little book – maybe it won’t be so paralyzing.

Anyway, that’s my plan. And I just spent a half-hour writing about that plan. Funny how easy that is.

But it was a lovely Getaway.