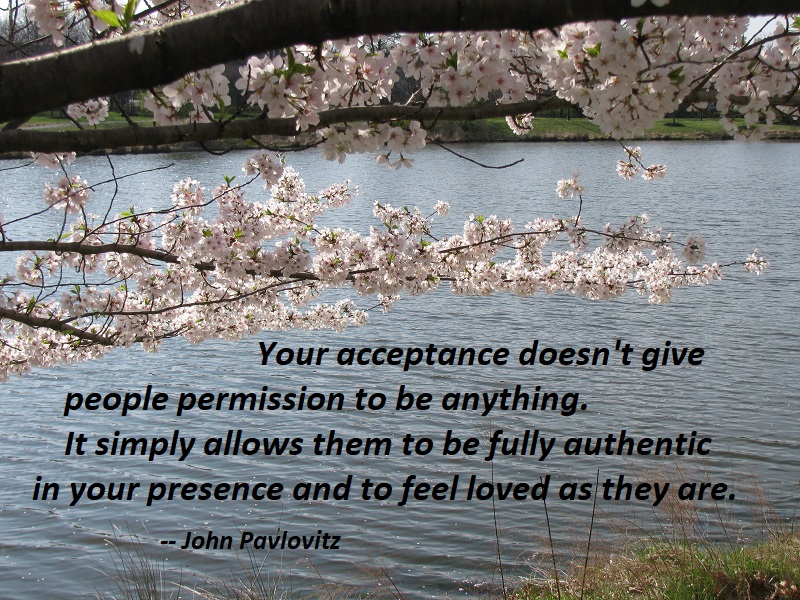 Recently, a friend posted a meme on Pinterest that says “Our culture has accepted two huge lies. The first is that if you disagree with someone’s lifestyle, you must fear or hate them. The second is that to love someone means you agree with everything they believe or do. Both are nonsense. You don’t have to compromise convictions to be compassionate.”

I disagree with this statement. I don’t think the writer understands the depth of what happens when people reject LGBTQ people. (Let’s be honest. That’s what they’re talking about here.)

[Note: I talked with my friend about it, and he wasn’t thinking about LGBTQ people at all. I still think the author of the meme was, and that’s what I’m arguing with.]

I hang around Christians and am a Christian and love Christians. But I’ve heard a lot of defensiveness about condemnation of LGBTQ people. They say we should “Love the sin and hate the sinner,” which just comes across as hate. They say you can accept someone without approving of what they do.

And that’s actually true. For example, I have a very good friend who’s polyamorous. I don’t approve of being polyamorous and would never ever do that myself. But who’s asking me? It doesn’t matter in the slightest what I think about my friend’s love life. I care about my friend and love talking with him, and he’s given me plenty of wise insight on relationships – some of which he’s gotten because he’s had to pay extra attention in order to navigate relationships with more than one woman at the same time.

Has being a universalist made me less worried about his soul? Yes, actually it has. Whether his behavior is sinful or not is between him and God – and they can work it out. One thing I’m sure of: His love life in no way blocks him from God’s love for him. And it doesn’t block him from my friendly love for him, either.

Just because I don’t “agree with his lifestyle” or “approve” of what he’s doing – doesn’t mean I need to disapprove of it either.

But let’s talk about LGBTQ folks. What’s at issue here is identity. This is about who they are.

It’s most obvious when you talk about transgender people.

My oldest child is a transgender woman. So there was a day when she told me that she was no longer going by the name I gave her at birth. And she told me that I was wrong about her – that she is not a man but a woman.

Suppose I say, “I love you, but you are wrong. You are deluded. You don’t know what you’re talking about. I’ve changed your diapers and know what’s between your legs, and that’s what makes you male or female. I know better than you.” And I refuse to call her by her new name or refer to her as my daughter.

Or even worse, suppose I say, “I love you, but it’s evil to say you’re a woman. It goes against God’s design.”

Could my child possibly feel loved in that situation?

Never mind that the Endocrine Society – doctors who deal with this – have come out with a statement that there is strong scientific evidence that we are born with a gender – but that gender is determined by what is between our ears rather than what is between our legs. And it doesn’t always match.

But let’s say that I decide that I know better, that since God created humans male and female and I am sure that knowing which one depends on what you can see on the outside of a person, then making the outside match the inside is evil and wrong.

I just can’t imagine that my child will feel loved by me if I insist on calling her my son and call her by the male-gendered name I gave her at birth. If I do that, am I really loving her? Or only the person I think she is, but that matches less and less who she says she is.

How could she possibly feel loved by me if I don’t even call her by her own name? I’m loving my fantasy child, not the child I actually have.

I’ve known many people in my lifetime who have gotten my name wrong, calling me Sandy or Sandra. One person thought my name was spelled Sandra and I was just trying to sound cultured or something pronouncing it “Sondra” – which he refused to do. I usually make the mistake of being too polite to correct these people, but if it persists, I have a hard time feeling like they know me at all. Now imagine if other people don’t even get your gender right.

I keep going back to the writings of Patricia Evans on verbal abuse. She says that verbal abuse is defining someone differently than the way they define themselves, insisting that you know better than they do who they are. Refusing to believe a person when they tell you what gender they are seems like the ultimate expression of this.

A person being treated this way is not going to feel loved.

Someone might say (and I’ve actually heard people say this), I accept your son, but I don’t approve of taking hormones and dressing like a woman. I believe that’s sinful.

With gays and lesbians, it’s also about identity. Being sexually attracted to people of the same gender isn’t something they chose; it’s the way God made them.

Now, you might say that the problem isn’t the attraction but acting on it. You accept the people, but you don’t approve of same-sex marriages.

My transgender daughter is engaged to a transgender woman, so there are those who think I should not approve of my daughter’s upcoming marriage.

Again, this is about her very identity. If people make a point of showing their disapproval by staying away from the wedding or delivering a judgmental sermon rather than a wedding gift – well, my daughter’s not going to feel loved by them.

Now, the main reason to disapprove is because you think the Bible teaches that same-sex relationships are evil and perverted. I’ve studied this issue, and I don’t think that’s a correct interpretation. I think Paul was talking about sexual exploitation, not loving same-sex relationships. So, as it happens, I do agree and approve and I’m happy for my daughter and her fiancé.

I guess part of the question is this: Who am I to approve or disapprove how another adult chooses to live their life? Doesn’t that fall under Jesus’ command, “Judge not lest you be judged?” How about we accept other people for who they are, and let God handle the approving or disapproving?

In fact, in the case of LGBTQ people, I believe that being vocal about your disapproval and calling it sinful can actually do that person harm, telling them that God will punish them if they authentically live the way He created them.

Back to the meme that touched off a reaction to things I’ve been hearing people say ever since my daughter came out – the first “lie” it called out is that “if you disagree with someone’s lifestyle you must fear or hate them.”

Well, if you only disagree, there’s no problem. But if you feel a need to protest that lifestyle, to get in their face, to loudly proclaim that this person is evil – as some Christians have in fact done to LGBTQ people – well, it’s pretty normal for the targets of that to feel feared or hated.

The second “lie” that the meme claims our culture has swallowed is that to love someone means you have to agree with everything they believe or do. Of course that’s nonsense.

But do be aware that if you “disagree” about someone’s very identity – it’s going to be a lot harder for them to feel loved by you. You don’t even know who they really are!

If you “disagree” that someone should be married to the spouse they’ve chosen – are you really able to make them feel loved? You can say you love them until your tongue falls off, but I don’t know if they will feel loved by you. It will certainly add constraints to your relationship.

It seems like the meme is trying to make black and white something that’s full of nuance. It’s trying to say that it’s possible to “hate the sin but love the sinner.” Yes, I can love people I think are sinning. But mostly I’ve found that it’s not my business if the people around me are sinning or not. As Paul says in Romans, “Who are you to judge someone else’s servant? To his own master, he stands or falls, and he will stand, for the Lord is able to make him stand.”

There’s a huge difference between disagreement and judgment. Are you really sure you’re only disagreeing?

In general, I find that when I’m most convinced someone else is sinning is when I’m least likely to be able to influence them to change. Funny thing about that. It’s almost like it’s not my job to convict other people of sin at all.

I wrote this entire post, and then yesterday I posted a quote by John Pavlovitz that says it more concisely:

One of the things you learn when you walk down the path of being an ally is that people aren’t LGBTQ based on the consent you give or don’t give to them, the approval you provide or withhold. That’s not how gender identity and sexual orientation work. Your acceptance doesn’t give people permission to be anything. It simply allows them to be fully authentic in your presence and to feel loved as they are. It secures people in those places where they should feel fully secured: in their families and friendships and workplaces and churches. If you don’t think you have LGBTQ family members, coworkers, classmates, and friends right now, you may want to ask yourself if that’s because you’ve created an environment in which they would be afraid to share it even if they were. It might be that your words and manner have already told people that they’re not safe to be honest with you. As our society thankfully becomes less and less hostile to the LGBTQ community and as people begin to gradually feel safer in authenticity, more children will come out and more families will have a new reality to reckon with. Those families will continue to seek spiritually and they will continue to need and deserve to be in faith communities where they are fully welcomed. It is one of the reasons the table needs to be made bigger.

I still haven’t touched on affirmation. Affirmation goes a step further than agreeing or disagreeing. Affirming someone is saying, “Yes! I hear who you say you are, and I find that delightful!”

It’s saying to my daughter: “You are beautiful, Zephyr! I’m so happy you are telling the world who you truly are! I’m so happy to have you for a daughter. I believe what you are saying about yourself, and I’m honored to learn this truth about you.”

It’s hugging and congratulating my daughter and her fiancé and rejoicing with them and dancing at their wedding.

And sure, you can love someone without affirming everything they do.

But affirmation sure feels nicer than judgment.