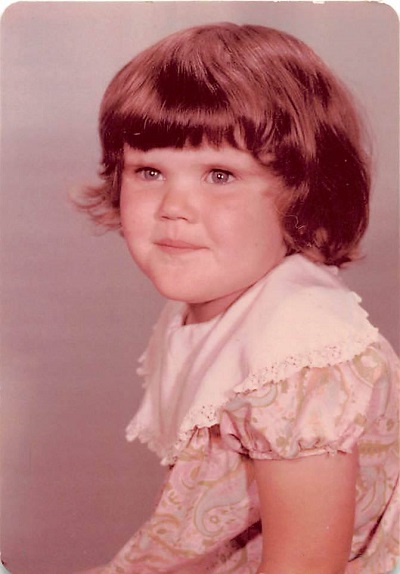 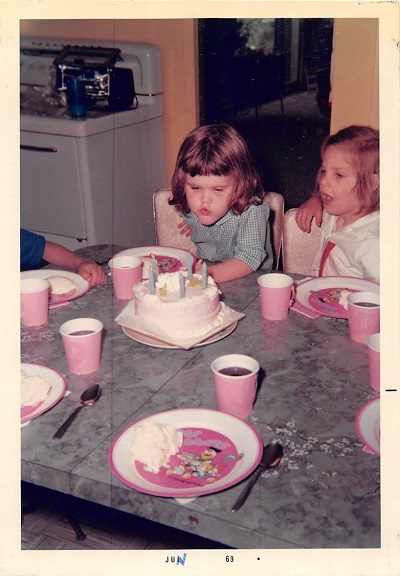 This picture brings back lots of memories around Birthdays. Remember that Birthdays are super important when you are five years old.

My Mom had a rule that we kids didn’t get a birthday party until we were in school. And yet you see me having a birthday party at five years old, before I was in Kindergarten. That’s because June 13, the day before my birthday, was the last day of school and a Field Day at school. I think it was a short day, too. Afterward, lots of the neighbor kids came over, and I’m pretty sure some cousins, too, and they had cake and ice cream for me.

I was remembering that was a kind of special bonus because it was the last day of school and field day. I remember that on my real birthday, the next day, Saturday, we had a gingerbread cake.

I was thinking back if that memory could be right. I did the calculations. Sure enough, in 1969, my birthday fell on Saturday. It’s surprising what a five-year-old can remember when it’s super important to her!

That was actually the first and last birthday party my Mom threw for me. I was looking forward to having a birthday party once I was in Kindergarten. I spent my school year deciding who I would invite. I remember I drew a picture of my birthday party. You could tell it was my birthday because there was a flag on the house. (My birthday is Flag Day and at the time I thought that was the best thing ever. Okay, yeah, I still think it’s pretty cool.)

Once I was mad at a girl and told my Mom I wasn’t going to invite her to my birthday party. She gave me a talk with something about forgiveness and love your enemies. So I was considering inviting her because I was such a noble person.

But it was all a moot point. When Becky’s birthday came around in March, I don’t know exactly what happened (I do remember some chaos.), but my Mom decided she was never going to throw a birthday party again. Which decision was devastating to me at the time. (I was told that I got a birthday party before I was in school, anyway. Though I knew that was different, because I hadn’t gotten to invite my own friends.) But then we moved anyway….

As I thought about this year, I realized I remember a lot more disappointments than earlier years. I guess as you grow up, you start to learn you don’t get everything you want.

But there are still good memories. I love this picture of our family in November 1969. 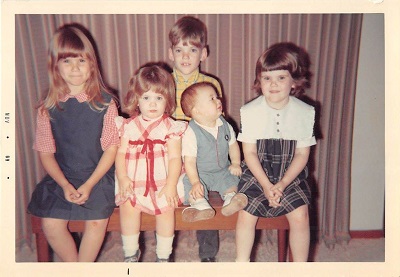 That summer, we took a ferry to Canada — another country! 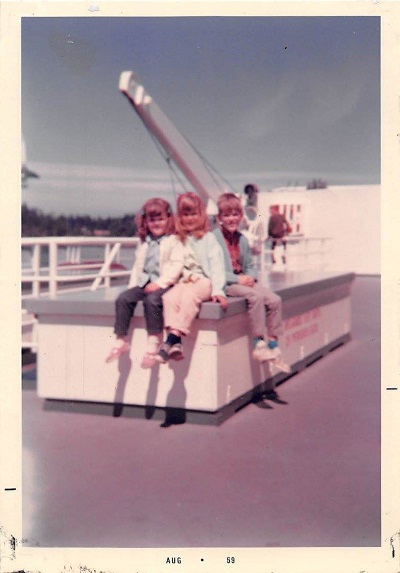 I remember Randy as being hard to keep up with on the ferry. He would have been only 6 months old, so maybe I’m misremembering, but he was the youngest to learn to walk in the whole family. 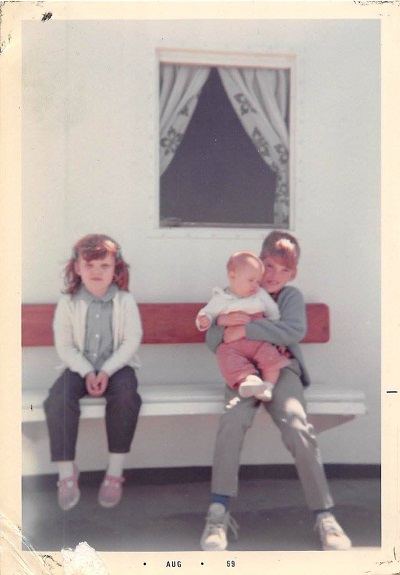 My teacher was Mrs. Wirt. I loved Kindergarten with all my heart.

On the first day, we learned the song, “Like a leaf or a feather, in the windy, windy weather. We will whirl around and twirl around and all fall down together.” I use that song in Autumn story times today. 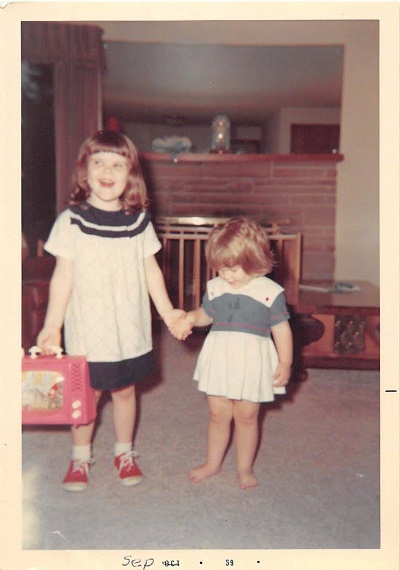 That might be a lunch box in this picture — no, I think my first lunch box was a Barn lunch box. It’s probably some kind of toy radio. And wait a minute — I went to half-day Kindergarten, so I didn’t need a lunch box yet.

And I still got more individual time with my Mom — I think of it as me and Wendy with Mom, since Randy was still a baby.

And I saw the very first Sesame Street! My Weekly Reader told about a new educational show starting up. Wikipedia says it first aired on November 10, 1969. I think I watched it in the early afternoon, just after getting home, before Ricky and Becky got home. I could already read, but I loved the show anyway. My favorite of all was the chef who was part of the counting videos and always fell down stairs with a bunch of desserts. I always acted that part out.

And we used to watch Captain Kangaroo, too! That might have been before Kindergarten. I do know I watched it with Wendy, and her favorite part was when the ping-pong balls fell on their heads. I remember two books especially being read by Captain Kangaroo. One was a book that my great-grandmother had at her house, Millions of Cats, by Wanda Gag. The other was Caps for Sale. I can still hear Captain Kangaroo’s soothing voice in my head when I read that book. And both are still wonderful for reading aloud.

But alas! I had looked forward to getting a Snow Day once I went to school, like my brother and sister had gotten the year before.

The only snow that fell that winter 1969-70 in Seattle — happened during my nap! That’s right — I remember looking out my upstairs window and seeing the snowflakes falling onto the green grass — and melting. By the time my nap was over — the snow wasn’t even falling.

And that was the year I heard a school bus driver say she hoped it wouldn’t snow! I made a vow in my heart then and there to never be the kind of grown-up who didn’t like snow. I’ve pretty much managed to keep that vow to this day.

These next pictures show that we were already in tune with the fashions of the 70s! 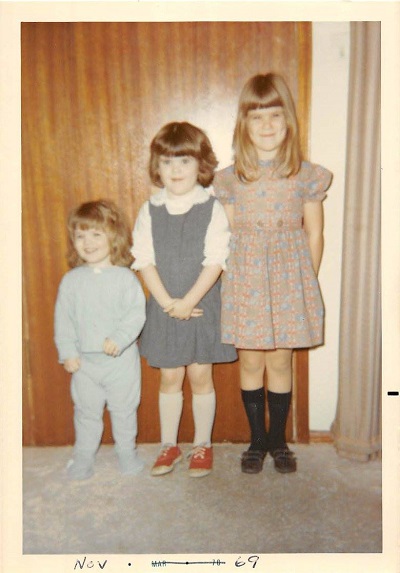 In fact, 1969 is the first year I remember knowing what year it was. The date was printed on the dimes we got for our allowance each week. (I know! So much money!) I remember how strange “1970” sounded and looked! 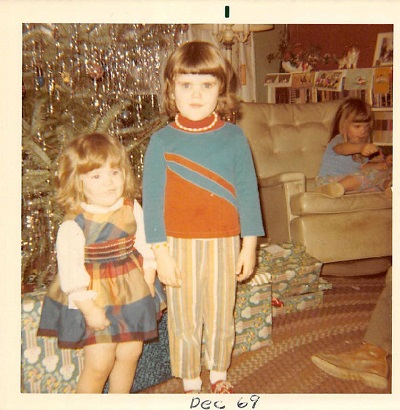 But 1970 brought the great tragedy of my young life.

One day, when I got home from school, Mommy told me, very excitedly, “We’re moving to California!” I went out to the garage and cried. I cried for my friend Karen to come get me. I did not at all want to move.

I planned from then on to leave California when I got the chance. That was another thing I managed to pull off as an adult. The way I saw it, California was way too hot and way too smoggy and way too little green. And it didn’t snow! (Remember, I thought that the “Big Snow” the year I was four years old was the way it was supposed to be every winter in Seattle.)

We took a trip to California before we moved and went to my grandpa’s funeral in Phoenix, Arizona, first. I met some of my many cousins I hadn’t met before. I remember being so surprised when cousin Craig called my Dad “Uncle Ronnie.” I think I also remember meeting Uncle Dean on that trip. (My Dad has eight brothers and three sisters. A couple of big families of cousins lived in Seattle area, so we already knew them. After this we would get to know the California cousins — with girl cousins my age!) I know I’d been to Grandma and Grandpa’s house when Grandpa was still alive, but now I think I was old enough to remember more and maybe they even let me climb “Grandma’s mountain” in back of the house.

Anyway, I had to leave my friends and my home in May 1970, with only a couple months left of Kindergarten. In California, there was no grass on the playground. And I wasn’t really in Kindergarten long enough there to make friends.

My sixth year was awfully eventful. A lot of memories I know were from that year because they happened in Kent.

Now I’m thinking of what I forgot to mention…. I may end up adding to this post this week (like I did last week). My best friends in Kindergarten were Karen Stewart and Beth Bell. But I’m not sure if they thought I was their friend of if I just liked them best. I know that I got to play at Beth’s house a few times.

But Kindergarten is also when I encountered a mean girl. A new girl, named Summer, joined our class in the middle of the year. She was friends with a girl I thought was my friend named Sherry. Or it might actually have been Karen. Anyway, one time I decided to sit by those two on the bus on the way home, because I wanted in on this friendship. And they pinched me, all the way home. Bad enough to draw blood in places.

I think that was the incident when I got the talking-to about forgiveness. I do NOT think I showed my Mom the pinch marks. I wasn’t going to invite Summer to my birthday party! But I might have ended up doing it to “repay evil with good.” Except that by the time my birthday came around, I lived in California and had a new set of classmates I didn’t really know yet.

Anyway, in California, the very next year, I made a true best friend…. Stay tuned next week!