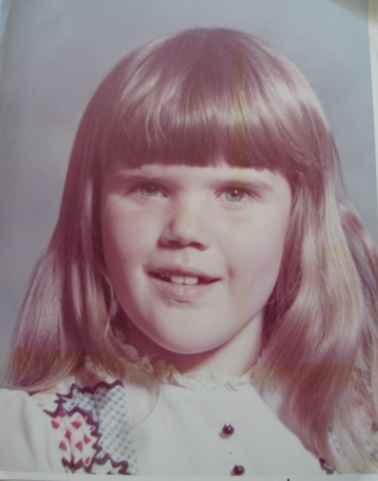 Eight weeks ago, on my 52nd birthday, I began Project 52 — for 52 weeks, I’m posting each week about one year of my life.

That was the first summer we lived in Wilmington, where we have an in-ground pool, so that would have been the summer I learned to swim. We didn’t take lessons, but basically figured it out ourselves. We’d already practiced in a smaller standing pool at the Carson house. But in Wilmington, we learned to swim before we were allowed to go “in the deep end.” Years of summers spent in the pool followed!

And — Fourth grade was the first year I had the entire school year in one classroom! (In Kindergarten we moved. 1st and 2nd grade was the year I moved up a grade. Third grade we moved.) It was the year that Kathy Morris, Darlene Sasaki, Abby Crilley, and I became best friends. I’m pretty sure that would have been the year of my first slumber party — the four of us went to each others’ houses. Though maybe when we were so young, it would have just been the first time I slept over at someone’s house. I did spend the night at Kathy’s and Darlene’s houses before the slumber parties started.

I remember probably the first time I slept over at Kathy’s house. I was feeling shy at the dinner table. We were eating hamburgers, and somehow in a shy way, I was holding my hamburger kind of under the table. There was a roaring sound — and half my hamburger was gone! Their golden lab, Sally, had seized the opportunity for a treat. I was so embarrassed! (They were nice to me about it. But I sure remember that incident. I’m pretty sure it was the first time I spent the night at Kathy’s house.)

Fourth grade is also the only year where the class picture is in the photo album. So here it is! 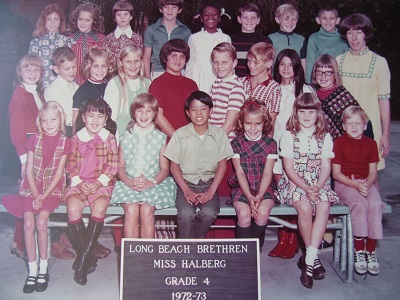 Kathy and Abby are the first two on the left in the back row. Darlene is on the front row wearing boots, and you can find me! Another friend I still have is Lauri Ann Stone, who is in the middle row, third from the left.

Looking at the picture reminds me how much I loved Miss Halberg! She was very strict (looking back, I think rather awfully so) — but she would talk with us at recess, and I’d pour out my heart — and I loved her.

I went to elementary school back in the days of paddling, and there were some rather awful incidents that year. But I was a “good girl” and was working on being a good little Pharisee and I never did get paddled at school. Speaking of being a Pharisee, that was around the time my parents started paying us to memorize Scripture. They started with different sections my Mom had typed out that we could learn, a lot from James. Eventually, it progressed to chapters. I remember my Mom decided I could earn $10.00 for saying Hebrews 11 and $20.00 for Psalm 119. I did those in 4th grade or 5th grade, before it became a standard 10 cents a verse for any chapter, the first time. Five cents a verse for a reviewed chapter, at least a month after saying it before.

October 1972 was the year I learned that your own mother could have a baby! Ronny was born! 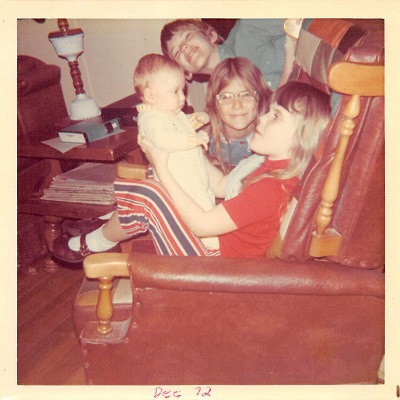 I have long said that if you catch a girl when she’s 8 years old and put her around babies a lot — she will be convinced all her life that she is good with babies. I loved holding Ronny, getting him to smile, helping him learn to walk, all of it.

Here’s a picture taken the following January. You can see we still enjoyed playing with the baby. 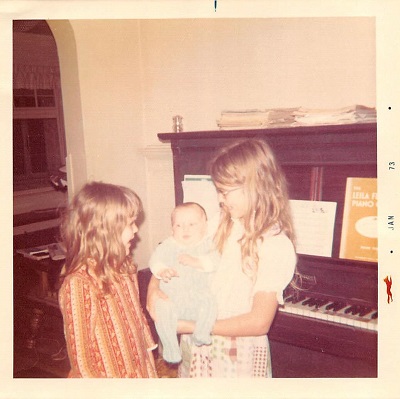 And here’s one more picture, taken on “Grandma’s Mountain” in Phoenix still wearing the pink sweater my other grandma knitted for me. 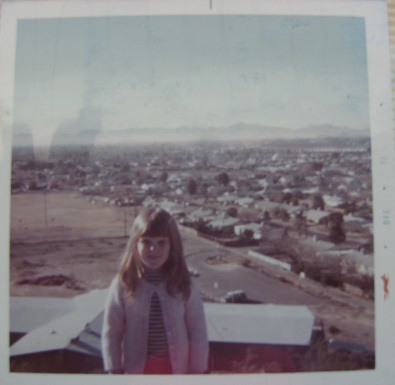