Transcending: They’ll Know Us By Our Love 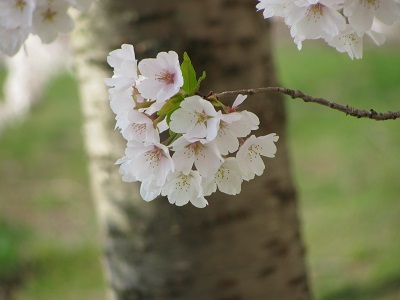 I’m going to start a blog series about the Bible and LGBTQ people and Christians and LGBTQ people, beginning with transgender people in particular. To give it a catchy title on my blog, I’m calling the series Transcending. The subtitle, which I may not repeat in every post, will be They’ll Know Us by Our Love. That’s the overarching biblical command that applies.

In this first post, I’m going to explain why I’m looking at this topic.

I have a transgender daughter. She came out a few years ago as an adult, when she was 27 years old. She lives on the other side of the country from me, in Portland, Oregon. I was fortunate in that she did tell me in person, so I could see with my own eyes this is still my beloved, wonderful child. I was prepared to mourn my son – but I don’t have to, because my child is still the same person I’ve loved all her life.

That happened three and a half years ago. The intervening time has had some bumpy moments, but my daughter has told me that living as a woman feels like Truth. And that’s what I’ve been praying for her all along.

I got to visit my daughter in February this year, and learned the happy news that she is engaged to be married! She’s marrying another transgender woman, so this is definitely a gay wedding – and I’m super happy for them. I see lots of signs that the two of them are good for each other, and I’m so happy to welcome another daughter into my heart.

But when I got back from my trip, my church called a meeting of the deacons to get their feedback about a new policy the elders want to add to the church constitution.

Here are the two paragraphs of the policy that upset me the most:

Marriage reflects Christ’s relationship with His bride, the Church (Ephesians 5:22-32). It is defined from the beginning of scripture as uniting one man and one woman in a lifetime commitment to each other and provides for intimate companionship, pure sexual expression, and procreation. Jesus reaffirmed this definition of marriage as God’s design (Matthew 19:4-5). God designed sexual intimacy for a marriage relationship and does not endorse or condone it in any other context. Any form of sexual expression outside of a marriage relationship is sinful and dishonors God (Genesis 1:27, 2:24; 1 Thessalonians 4:3-8; Hebrews 13:4; Romans 1:18-32; 1 Corinthians 6:9-20). Sexual sin is not, however, unforgivable sin and the same redemption through Christ, available to all sinners, is available to those committing sexual sin. Additionally, temptation, including sexual attractions, is not sin. Sin is yielding to temptation in thought, word, or deed.

Due to the effects of sin and human brokenness in this world, one’s experience of their sex and gender is not always as God originally designed. It is our desire to come alongside as a loving and accepting community supporting anyone experiencing a gender identity discordant with their birth sex. However, recognizing that our sex as male and female is designed and ordered by God, we do not agree with any attempt to alter one’s birth sex through medical intervention on the basis that it dishonors God’s design (Genesis 1:27; Genesis 2:18-22; Romans 12:1-2). This does not apply to intersex individuals born with a reproductive or sexual anatomy that does not seem to fit the typical definitions of female or male.

I disagree that marriage can only be between one man and one woman (and this completely ignores all the polygamy in the Old Testament), but I at least understand where in the Bible this is coming from, even though I disagree with this interpretation. I hope to get to that eventually in this series.

But my main focus at least at the beginning of this series will be looking at the paragraph about transgender people and why I believe it is not remotely biblical.

Now, before I start those arguments, some of my friends may wonder why I am still attending a church that proposes such a policy. So this first post will be about my history with this church and why I feel called to stay – at least until the congregation votes on this policy in Fall 2019.

And the policy has not passed yet. To add anything to the church constitution, there must be a meeting of members, announced in the program at least two consecutive Sundays before the meeting, and the change would need a two-thirds vote of the members present.

That’s a high bar to pass. If two-thirds of the members really do think that being transgender dishonors God’s design, then it is time for me to find another church. But I still have much hope that this will not happen.

Honestly? I believe that to make up a rule not found in Scripture and enshrine it in a policy statement would be to commit the sin of the Pharisees from Matthew 23, tying up heavy loads and placing them on people’s shoulders. I love these people and hope I can convince at least a third of them not to take this step.

All my life growing up in conservative evangelical churches, the churches I attended would pass out “political scorecards” which claimed to tell which legislators were taking the “biblical” position in their votes. At the time, I already knew the Bible well enough to know things weren’t as simple or as clear as they pretended. It always bothered me that they dared to know the “Christian” view on every issue. But the pastor at the church I attend now has never allowed anyone to pass out those scorecards. I so respect that!

About six years ago, this pastor did a political series, looking at some major political issues for about four weeks. I cringed, expecting to hear only one side on each issue. But no! Much to my surprise, he admitted that Christians were on both sides of each one of the issues presented. In many cases, he had someone come in to present another side, and where that didn’t happen, he worked hard to research the other side.

In the case of same-sex marriage, you could tell what the pastor thought, but he did present why many Christians believe homosexuality is not a sin. In fact, I had already slowly come to that conclusion – but that sermon was the first time I heard a reasonable way to approach the Bible verses that seem to be about it.

There’s no Code of Conduct at this church. Yes, if there are concerns, it could keep someone from becoming a member. Yes, when an elder had an affair, he was removed from office and there was church discipline until he showed honest repentance and was restored to fellowship. But when we become members, they ask us in front of the church if we have accepted Jesus as Lord of our life and if we feel called to give our time, treasure, and talent here at this church. There’s never any impression that you have to follow a list of rules to be a member.

My sense is that we’re a bunch of people who don’t necessarily agree about every little thing, about politics or every point of doctrine – but we all love Jesus and want to follow him. And we’re here to serve and care for each other.

I’ve got a long history with this church, too. They’re like my family. I came to northern Virginia from Germany after my then-husband had an affair and got himself ordered to Japan so I couldn’t follow him. I came to Virginia to be near two dear friends I’d known since third grade. They both attended this church – and right away the church took me in and loved on me and helped me survive my divorce and heal and grow.

So I’m not going to leave lightly. And I’m deeply grieved at the thought that these people I love might make a policy that would exclude so many wonderful people.

They don’t want it to exclude. And that’s partly why they’re trying to bury the new policy in the bylaws of the church constitution rather than in the statement of faith. They don’t even necessarily want people visiting the church to know it’s there.

Now, my solution to that is simple: Don’t discriminate.

I think the rationale for why we need this now is that the church recently built a building and we run a child care center. The leadership doesn’t want to be required to hire LGBTQ staff for the child care center. And I think they also don’t want to have to rent the facility to hold same-sex marriages. They are afraid they might be targeted by some sort of malicious lawsuit and want to cover themselves by having a statement that this is sinful. (At least this is my understanding of the rationale.)

Again, my solution is simple: I don’t think being LGBTQ is sinful, so I don’t think we should discriminate against LGBTQ people in any way. For that matter, you may not even know if someone applying to work there is transgender or gay or anything else, and you don’t really need to know that to determine if they will be a good teacher. (And background checks are required for all volunteers and staff who work with children, as well as plenty of training to be extra careful that the children in our care are safe.)

So that’s the situation. This church is filled with people I love. I’ve always been so proud of the church for not pretending that one political viewpoint is the “Christian view.” We’re a bunch of people who love Jesus and want to follow him seeking to join together in authentic Christian community.

And now we’re contemplating a policy that I believe would exclude vulnerable people and tell them that God is not pleased with who they are.

I have talked at length with the pastor and the elders about this, and they listened to me with compassion and respect — for a while at least. The last few emails I sent were not answered at all. I don’t blame them for getting weary of talking with me about it — I keep bringing it up. I should add that the first version I saw was worded much worse than this version, and I appreciate that they changed it — but it’s still not enough. And it still hurts that they would propose a policy so hurtful to my child and any other LGBTQ folks who might have otherwise been attracted to the gospel of Christ.

But that’s why I’m now ready to talk with the other members about this. There are many, many reasons why I am against this policy. Writing them out will help me keep track of those reasons and practice presenting them to others. I do know what I’m talking about — I’ve memorized the New Testament and got my undergraduate degree at Biola University, where everyone minors in Bible. With my personal connection, I have a perspective on it that others might not and a strong reason to do the research.

So the posts that follow will explain why I so strongly believe that transgender people should be fully loved and affirmed for who they say they are. And why I believe that fits much better with what the Bible teaches.