It’s Ash Wednesday, and just this morning I was complaining on Facebook.

I’ve been sick for seven-and-a-half weeks with a nasty bug. Yesterday I actually took a sick day, hoping a lot of sleeping would help me shake it off, but this morning, I had a lot of chest pain. The pain itself was fairly mild, but was happening over an extended period of time. (Though after I got to work, I didn’t have very much chest pain the rest of the day.)

I’ve seen doctors at various times over the seven-and-a-half weeks. They’ve told me it’s viral bronchitis and it takes a long time to heal. There’s no sign of a bacterial infection to go with it.

Now the first week was awful — the main symptom being ear congestion and extreme room-spinning dizziness, but I was in California for my mother’s funeral, and my family took care of me. Even when I got home, I didn’t have to go to work right away, and I took it easy. Since then, I haven’t been all that sick — but I’ve been sick for a long time.

But today I felt convicted for complaining.

There’s a balance between acknowledging that I’m going through tough things and complaining — Why should this happen to me? There’s a distinction between facing difficulty and self-pity.

Just a few days ago, I was reading quotes on my Sonderquotes blog and found this one from Fred Luskin’s book Forgive for Good. 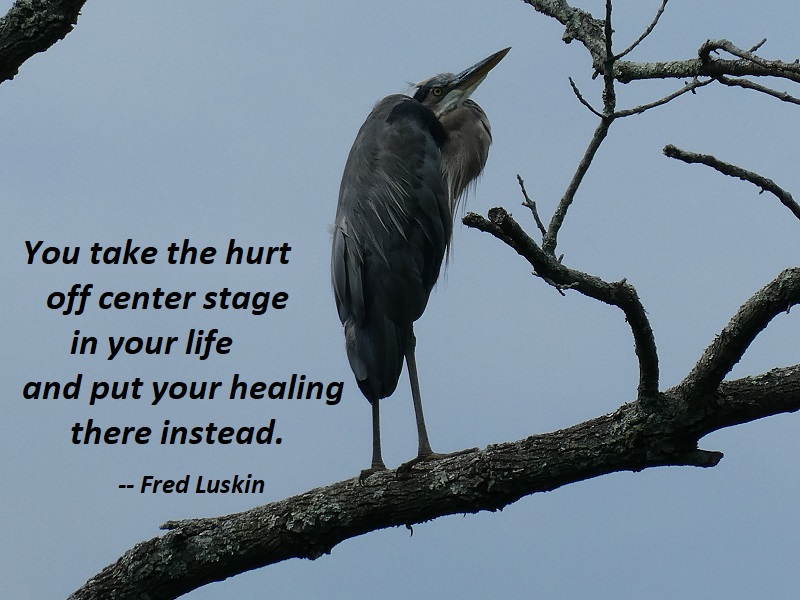 Follow the link to read the entire (long) quote, but it’s about telling a story about what happened to you where you’re the hero, not the victim. Talking about what you’ve overcome rather than how you’re being defeated by these big, bad problems.

So instead of feeling sorry for myself about this illness that’s hanging on and on, how can I look at it differently?

And the first thing that comes to mind is this: Maybe I’ll go easy on myself.

The fact is, this illness seems like a physical manifestation of emotional things I’m going through. And those aren’t “cured” in less than seven weeks, either.

I came down with the bug a few hours after my mother’s memorial service. My mother passed away after a very long bout with Alzheimer’s, but my father passed away unexpectedly two months before that. There’s a part of me that thinks I should be “over” my grief after seven weeks, just as I think I should be over that virus. I’m not.

I won’t say much about it, but a couple weeks after that, I became estranged from my oldest child. That is great grief, too. I am not over it.

And a couple weeks after that, my little 3-year-old niece Meredith was diagnosed with leukemia. That’s not exactly grief — but it’s worry and deep sadness that a sweet little girl would go through that. And she’ll be dealing with that for a few years, even if all goes well.

And so, yes, being sick physically almost feels like a reminder to take care of myself. Maybe if I can see and feel that I am not healthy — I will remember to be kind to my emotional self as well.

I’ve been reading and memorizing Isaiah 43 ever since our pastor preached a sermon on it a few weeks ago. The beginning is inspiring —

No, I’m not burned. Yes, being physically ill as well as emotionally wounded helps me stop and quiet down and notice that the Lord is with me.

And another verse in Isaiah 43 seems perfect for Ash Wednesday:

I, even I, am he who blots out your transgressions for my own sake,
and remembers your sins no more.

Yes, I’ve been complaining. And I’ve sunk into that periodically throughout these two months.

But the Lord doesn’t ask us to wallow. He blots out our transgressions because that’s the kind of God He is.

This illness reminds me of my weaknesses. That there are things I’m not able to handle. God doesn’t reproach me for that. But He reminds me that He is with me. And I need the Lord.

When I sing and pray, Lord, have mercy! I pray it from my heart.

And indeed, even the illness itself is touched with His mercy.