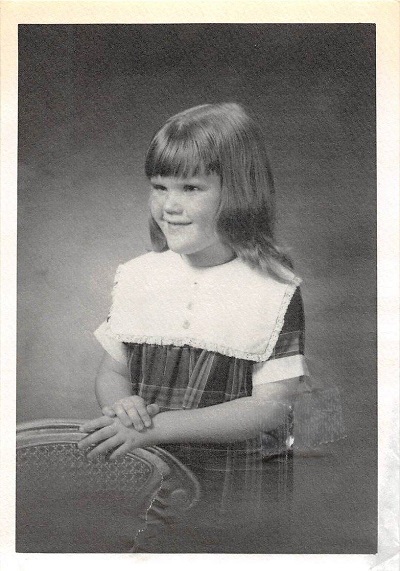 Seven weeks ago, on my 52nd birthday, I began Project 52 — for 52 weeks, I’m going to post each week about one year of my life.

Already it seems very strange to me that I only lived in the Seattle area for four years. It was a lifetime at the time!

It especially seems appropriate to assemble this post from California, from the same place we moved to the year I was seven years old. I’ve been visiting family this week for my niece’s wedding, and spending some time at my parents’ house — which is still the same house in Wilmington we moved to in 1972. I got to go through photo albums and scan more pictures for the upcoming years. Of course, many of the photos I won’t post here — of the house or of church or other everyday things — sparked so many memories.

The picture up above is the first one I’ll talk about. If you look closely, you might be able to notice that the eye away from the camera is a black eye!

We had the appointment to get my seven-year-old pictures taken — and a morning before it, my parents were playing tennis. We kids were running around on the tennis courts. I was running from one side of the net to the other — and tried to run in between the net and the post holding it up. It turned out that the rope holding the net up was right at my eye level — and I got a black eye.

I turned seven years old on June 14, 1971. We were still at the house in Carson that summer, and I still played with my best friend, Karen Iwata. Apparently we went over to each other’s houses in the summertime, too. 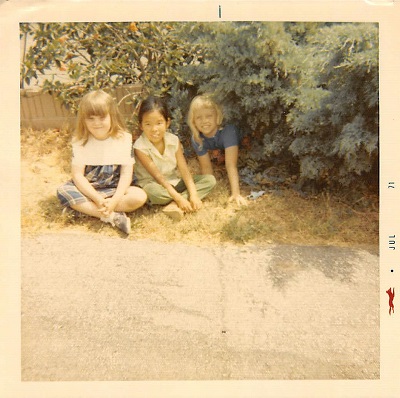 Here I am playing in the bushes with Karen and our next door neighbor, Debbie Wardrop. 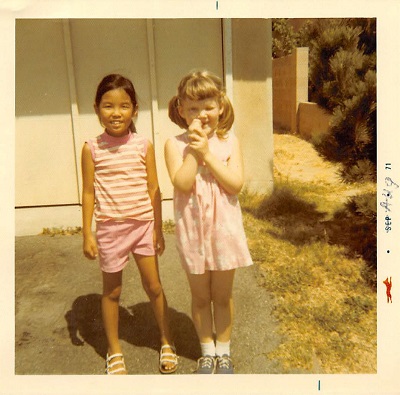 And that’s another picture of Karen and me.

In Carson, our house was so small that Becky and I shared a room. 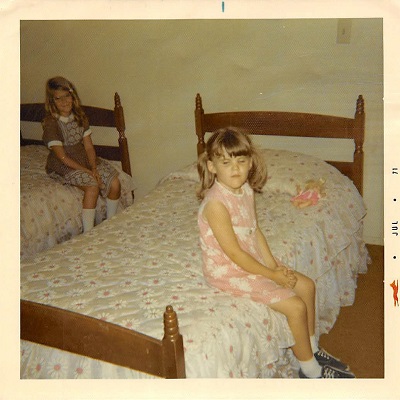 Hmmm. I know most of the time we had these as bunk beds. Probably to make more room. Becky would hang down from her bunk and annoy me. I wonder if this was after or before that. The doll on my bed is Newborn Thumbelina. 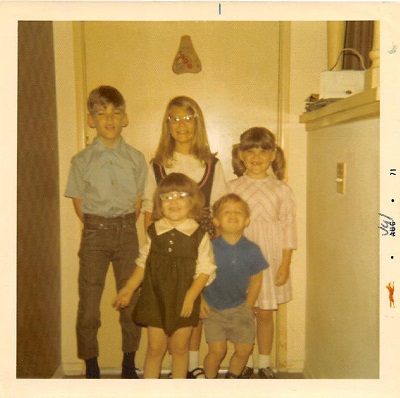 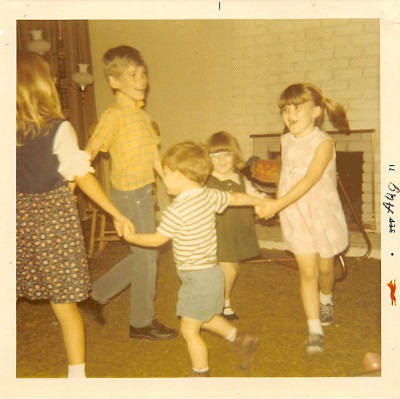 And Becky and I were still bought matching outfits: 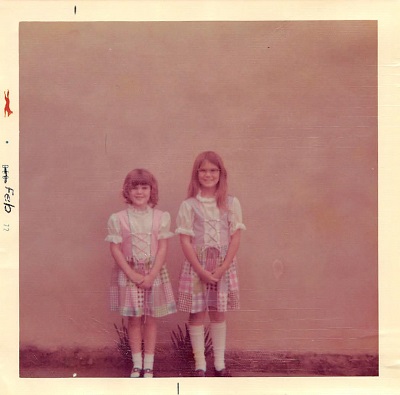 Third grade in Carson, I loved my teacher (the same one Becky had before me, and I think Ricky, too), Miss Kita. My best friend Karen was still in my class.

Miss Kita had lots and lots of “centers” in her classroom — things to do, games to play, great activities for when you finished your work. That was the year we learned multiplication. Karen and I tended to be the first people done — so lots of play time.

Then — in February, our family moved to Wilmington. We moved into the house my parents still live in today.

They were told that the local school wasn’t a good one, and we started going to Long Beach Brethren Elementary School.

I did not like my new class. Miss Kita was young and fun and her classroom was full of fun things to do. Mrs. Monroe was very old — and said that when you finished your work, you should work on multiplication flash cards. Well, I already knew my multiplication tables. Eventually, we worked out that I could read after doing my work, but it was a far cry from Miss Kita’s class.

When we found out we’d move, my friend Karen started playing more with a girl named Suzanne. I didn’t feel as included. Then we moved and the new classroom was so awful in comparison.

However — little did I know that two friends I met that year would last me the rest of my life.

I don’t think we were really best friends until fourth grade, but in third grade I already did some playing with Darlene Sasaki and Kathy Morris. Years later, when my husband left me and got himself sent from Germany to Japan, unaccompanied — I moved to Herndon, Virginia, where Darlene and Kathe live now.