Nine weeks ago, on my 52nd Birthday, I began Project 52 — for 52 weeks, I’m posting each week about one year of my life.

At my parents’ house recently, I scanned in lots of old pictures. They have sparked many memories. I was surprised to discover that for the year I was nine — June 1973 to June 1974 — I didn’t scan any pictures at all.

So I’m trying to remember that year without the benefit of pictures. I was in fifth grade at Long Beach Brethren Elementary School that year with Mrs. Becker as my teacher. My best friends were still Kathy and Darlene and Abby. 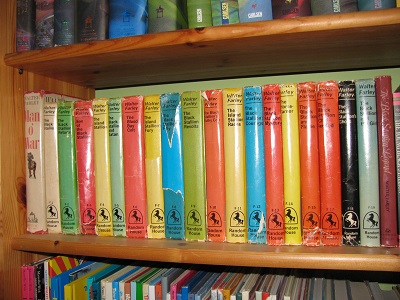 But I remember that I had not read the book when Kathy did the book report. I must have started reading them that summer — and loved them so much! I had a sheet of paper in a notebook where I kept track of how much money I had and how much I needed to buy the next book. They were $2.95 each (for a nice hardcover!). And Man O’ War, based on a true story, was $3.95.

Since I’m pretty sure I started reading them the summer I was nine, it must have been my tenth birthday when I completed my collection. My parents gave me THIRTY DOLLARS for my birthday that year! We went to Pickwick Booksellers in the Carson Mall and I spent all that money on books. I bought the remaining Black Stallion books I didn’t have (except Son of the Black Stallion, which wasn’t there that day) and Man O’ War and The Phantom Tollbooth. So I must have bought seven or eight books that day. (I think my Mom paid any tax. They were generous.)

I did read them all out of order, since I bought them as I earned the money and as they happened to be at the bookstore. (Oh those days before Amazon and before ubiquitous computers!) I must have read The Black Stallion Revolts, one of my favorites, Book Nine, in the summer, because I read it during my nap and didn’t stop until I’d finished — five hours later.

[That reminds me, our Mom required us to take naps when we were home, for her own sanity (at least until we reached 7th grade) — but we were allowed to read during those naps, we just had to stay in our rooms for an hour. This is a brilliant way to encourage love of reading in kids. It also built my lifelong habit of reading in bed.]

Kathy loved the Black Stallion books, too. We got to be rather horse crazy — though later Kathy actually got a horse of her own. It was always just a fantasy for me.

I do have a funny story about Walter Farley’s books. Books 4, 7, and 11, are about The Island Stallion rather than The Black Stallion. Both horses were crazy fast — the books are about horse racing — but The Island Stallion lived in a secret island canyon hidden by cliffs, a descendant of horses the conquistadores brought to America. Only Steve Duncan and his guardian knew about the wild stallion.

I loved the first two Island Stallion books, but Book 11, The Island Stallion Races, is just weird. Aliens come and land on the island and they disguise Steve Duncan and transport him and Flame off the island so they can race and prove how fast Flame really is.

It’s a very strange book. I read and reread all of these books, but that one I only read once.

That’s the first part of the story. The next part happened in sixth grade. I was always a good speller, since, after all, I was a voracious reader with a very visual memory. But I remember one time I spelled the word “coconut” wrong. I had a hard time with it, because I was sure I’d seen it spelled as “cocoanut,” so that’s what I put down. My teacher actually laughed delightedly to catch me in a mistake! (He wasn’t the only teacher to ever do that about me missing a spelling word.)

Okay, now fast forward thirty years. I was reading all the Walter Farley books to my child. We got to The Island Stallion Races (which they liked a lot because they loved stories about aliens), and in two different places, I found the word “cocoanut”!

I interrupted the reading to shout, “I knew it! I knew I’d seen it spelled that way!” I felt so vindicated!

The moral of the story being: Editors, please don’t let misspellings get past you. Small children will be scarred for life.

Okay, back to the year I was nine….

That gets me thinking of other books I loved. The Chronicles of Narnia were tremendous favorites, other ones that I read and reread. I remember putting them aside in 7th grade, sadly deciding I was too old for Narnia. I happily picked them up again in college.

Another series of books I loved were the autobiographical books by missionary Isobel Kuhn. I especially loved Stones of Fire, which I got from our church library.

One of the books I loved to check out from the little Carson library branch on Avalon Street was Sawdust in His Shoes. I recently got that via interlibrary loan and reviewed it.

And that reminds me of another book I loved from that library, Pony for Keeps (I think it was called). I’m going to have to do the same for it! And that reminds me of other favorites, Come on Seabiscuit! and Little Britches, by Ralph Moody. (Both of those I managed to purchase as an adult.)

I also liked books with “Magic” in the title. I loved Magic in the Alley, by Mary Calhoun and Black and Blue Magic, by Zilpha Keatley Snyder. And the Edward Eager books! My favorite was Seven-Day Magic. But all of them are wonderful.

The first romance I read was Pollyanna Grows Up, in a copy my mother had once owned. I loved it so much! I later read Pollyanna itself. Those books are wonderful, fundamentally Christian, and unfairly maligned.

Oh, and Bambi! It’s nothing like the movie, not at all trivial or cute. Bambi was another one — along with quite a few of these mentioned — that Kathy introduced me to. Another animal book favorite was Black Beauty, though that one I’d had my own lovely edition since second grade or so.

While I’m talking about books, I’ll mention The Hobbit. I didn’t read it until 6th grade, but that’s another book I loved so much I remember where I was when I was reading it — particularly a time I was reading it on the way to school and had to stop right when Bilbo was in the dragon’s cave looking at the treasure!

Speaking of reading, fourth grade was the year I got glasses. I also got pretty frequent headaches by fifth grade. I know that glasses helped the headaches a little bit.

But I know I got headaches in the afternoon and often had them during flute lessons, because Mr. Currie commented on them.

Now it’s obvious to me — I was playing on a cement playground for an hour at lunchtime in the bright California sunshine. Without sunglasses. Of course I got headaches!

My Mom said that an eye doctor once told her that her eyes were ten times more sensitive to light than most drivers. She always wore clip-on sunglasses to drive. I don’t know why we didn’t figure out I’d inherited that.

Now I never set foot outside without sunglasses. But it took me years to figure that out. And direct sunshine is one of the very quickest ways to trigger a headache.

I used to go into a dark room with my arm over my eyes. I’d ask my Mom to take my temperature. She’d look at it and say, “You’re not sick.” — So I’d have to go to school the next day. (The rule was that if you had a temperature above normal, you could stay home the next day.) This wasn’t actually a problem with school, since my headaches always went away in the night anyway. (It wasn’t until after my first child was born that I started getting multi-day headaches.) It was sometimes a problem for Sunday evening services at church — I remember times praying to bear the pain. But since I “wasn’t sick,” I had to go to church with the family.

But that wasn’t really all that frequent. I don’t really blame my Mom for not figuring out I had a problem — after awhile I’d take my own temperature quietly in the bathroom and not tell her when it wasn’t a fever. She probably didn’t even know how often I got them. And I didn’t know there was anything I could do. (I discovered aspirin in late high school.)

All in all, fifth grade was happy. There was a fun baby at home, great friends at school, an imaginative life with great books, and swimming in the summer. That’s how I remember it now, anyway.

And yes, now I see seeds of the Librarian I was later to become. Why’d it even take me so long to figure it out? In fact, some time during those years I remember thinking that I wanted to be a writer but wasn’t sure I was good at it and was wishing there was a job about reading books. Why didn’t I know there was a job like that? We went to the library often enough, but I didn’t interact with the librarians much. So I had to wait to discover what I was born to do.