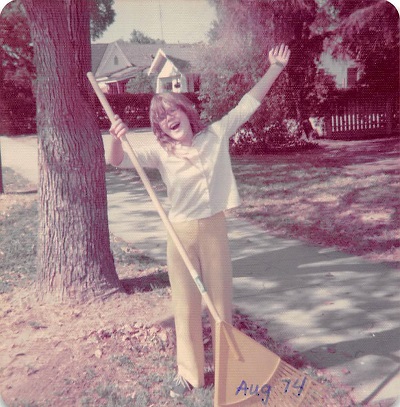 My birthday is at the start of summer, so during that time, I’ve got lots of time with my family. This picture with my baby brother Ronny makes me laugh. Baby brothers were fun to play with! 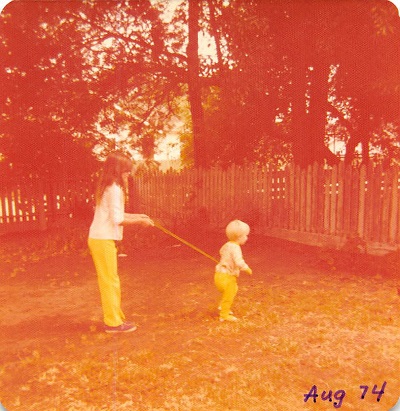 This year must have been when Aunt Susie was living in our house. There were a few years, I believe. (My Mom’s younger sister. My Dad’s younger brother David had lived with us for awhile in Washington.) Because I remember that when my Mom was in the hospital for Jeffy’s birth, Aunt Susie was taking care of us. And Ronny clearly came to believe that Susie was trying to replace Mommy. He wouldn’t let her touch him! So Becky and I had to change his diapers and put him in bed until Mom got back. Ronny was exactly 2 years old, so it wasn’t exactly a compliant stage to have Mommy disappear for a few days.

I was still delighted to have another adorable baby to play with.

Now, with Rick and Becky in Junior High, and me left in Elementary School, a conflict developed. My Mom believed that children should get 11 hours of sleep. We got up at 6:00 to make it to school — so we had to go to bed at 7:00 pm.

However — once we hit 7th grade, she stopped even trying to set our bedtimes. It was up to us.

So — the fact that Rick and Becky could stay up as late as they wanted, but I had to go to bed “the same time as the baby!” struck me as a horrible injustice. My defiance began by just pulling my curtain back and reading by the light of the sun outside (which was still up at 7 pm!). But after awhile, I started going into my walk-in closet, curling up on my sleeping bag, and reading in there with the door closed, so that the light wouldn’t go under the door from my main room into the hall.

I was never caught. It’s been suggested to me recently that I’m sure my Mom didn’t actually want to catch me. It was probably more about peace and quiet than about actually getting me to sleep. I felt vaguely guilty at the time (I was, after all, a rule follower) — but was so convinced of the injustice, I was unrepentant.

I do remember that was the year I read Little Women, by Louisa May Alcott. I remember looking at the clock and discovering I had stayed up until 9:00! I was reading the part where Beth dies and having a good cry.

And so began a long history of staying up far later than I should to read a wonderful book. I am still unrepentant.

6th grade was Mr. Knapp’s class! He was a wonderful teacher, and another one (like Miss Halberg in 4th grade) whom I loved whole-heartedly. Though his style was very different from Miss Halberg’s.

And couple of things Mr. Knapp did were especially memorable — Sword Drills and Language Arts Baseball.

Sword Drills were what we did for Bible class. (Because the Bible is the Sword of the Spirit.) He’d call out a reference, and you’d see who could look it up the fastest. He had a nice way of determining the winner, back in the day when we all used the same version. He’d say, “4th word, preceding verse,” or “7th word succeeding verse,” or the like, and whoever called out the particular word first would get the point.

But then things got more complicated — for more points. Instead of calling out a reference, he’d start reading a verse. We’d use concordances or knowledge to find the verse. Then he started using some of the same verses he’d used before. Those would be more like 3 points, rather than 5. I still remember that Eric used to hang out on the verse, “Come now, let us reason together….”

Yes, I had the most points at Sword Drills. But I had a very close rival in Daphne Sykes, who was FAST. Her fingers would fly. My advantage was that I could find new verses more quickly, so I’d get more of the high point verses. She was faster at turning pages and blurting out the answer.

It was extremely fun, and very tense competition. And we learned the locations of many important Bible verses — and definitely know the order of the books of the Bible. (That was the year I learned “General Electric Power Company” to remember Galatians, Ephesians, Philippians, Colossians.)

The other big competition was Language Arts Baseball. It started with just a Language Arts worksheet that Mr. Knapp would send home at the end of every day. A set of words on top. Numbered definitions on the bottom. 20 words per page. You had to match the words with the definitions. They were hard words, even for me, an avid reader.

After awhile, he added Language Arts Baseball. The teams were the rows. One person would be up to bat. The opposing team would be in the field. Mr. Knapp would read a definition, and the person up at bat would try to say the word more quickly than the outfield.

My row, Row 4 won something like the first four weeks of the competition. Then Mr. Knapp decided to modify it to one-on-one. Only one person could be in the outfield, so the whole team had to be good. That week, we went down in defeat to Row 5, Daphne’s row. But the competition continued all year, and I believe Row 4 were the champions for the year.

Because of that competition, I remember that Kathy was in my row, Darlene was in Row 2 (which was also a rival row), and Abby was in Row 3. Besides Kathy and me, the other people in Row 4 were boys. When things really got tense, there were some recesses where Kathy and I spent some time drilling some of them on the Language Arts words.

Did I mention that I like competing? I thought Language Arts Baseball was SO MUCH FUN! I’m afraid, though, that I cried that time that we first went down to defeat against Row 5 — and Dennis laughed at us! And then I was SO ashamed of crying about it. But I was able to quietly go to the restroom with Kathy until I could pull myself together.

Some other memories of that grade are sparked by pictures. This one reminds me that I liked to bake. I had a Betty Crocker cookbook — I still have it — and one day when I was home with a flu bug, I decided to try baking bread. 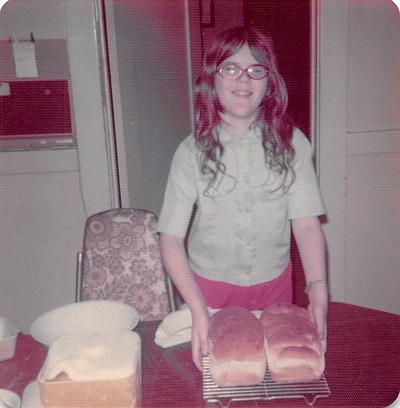 This picture is from some sort of craft fair at the school. But it reminds me that I enjoyed crewel embroidery. 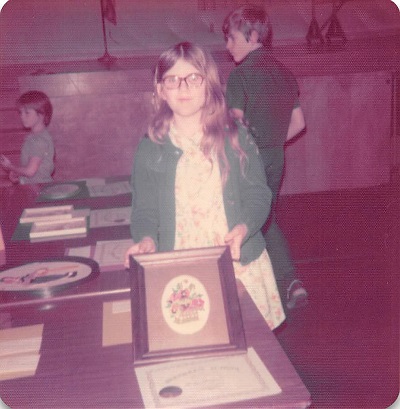 And here’s a picture from February 1975, reading to Baby Jeffy. 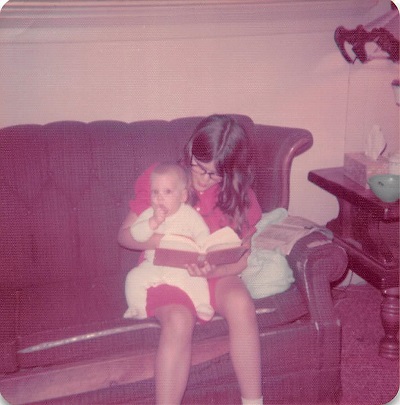 Oh, another thing I remember from 6th grade was Rawhide Ranch — and that Kathy, Abby, Darlene, and I TP’d the boys’ cabin!

We got permission (from Mr. Knapp!) to do it after the group hike, while everyone was in the Saloon having hot chocolate. I didn’t really do much — I was too nervous, so I was the look-out. But the boys never figured out we did it — which was surprisingly something of a let-down.

Alas! After 6th grade, Abby stopped attending Brethren schools, and Kathy moved to Catalina Island, and later to the Washington, DC, area. So this was the last day of our foursome. Here we are, my dear friends and me, at 6th grade graduation. Ha! Look at that! I was the tallest! We ended up within an inch of each other, but I was then only an inch shorter than I am now — I got my growth, such as it was, early. 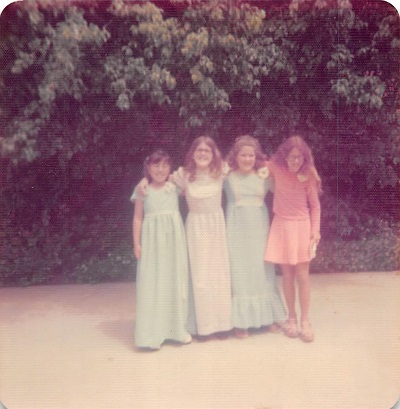