Saturday was a day of lots of great sessions of learning and inspiration.  First up, at 8:00, I went to a session called “Listen Up!  Using Audiobooks to Motivate Boys to Become Readers” featuring a panel that included the illustrious Ambassador Emeritus of Children’s Literature, the hilarious Jon Scieszka, He Who Laughs Like a Little Boy Getting into Trouble.

Jon and the rest of the panel talked about how audiobooks can help reluctant readers (particularly boys) see themselves as readers.   They talked about all the great things that happen when children listen to audiobooks.  Jon is adding a new part to his Guys Read website called Guys Listen.  It has some great resources.  If I become an elementary school librarian, or even if I go back to being a public librarian, I want to come back to this site and this information to convince parents and teachers how great audiobooks can be for kids.

Oh, they also showed the hilarious clip which you’ll find on the Guys Listen site that promotes Jon’s new Guys Read collection of funny stories.  The clip is of the writers of the funny stories all telling parts of a joke.  I want that book!

After that session, I tried to get to the session called Move Over Dick and Jane: Reconsidering Books for Beginning Readers, about how beginning readers are changing.  However, in that room, there were no seats left, and I learned three years ago that it’s no fun to go to an ALA session and sit on the floor.

So instead, I went to hear Sue Monk Kidd and Anne Kidd Taylor talk about collaborating together on their book Traveling With Pomegranates.  It was wonderful!  I’ve recently been reading several meditative books by Sue Monk Kidd, so it was a thrill to meet her.

Some things she said that I liked:

Memoir is about backward understanding.

It’s always a reach for wholeness when you write memoir.

Memoir can create wholeness in the reader as well.  [That says it for me.  When I join an author on her journey seeking wholeness, it indeed helps me find it myself.]

To write memoir, you need an authentic willingness to be known, a unilateral disarming.

Aging is about the process of letting go of what is leaving anyway and letting something new grow. 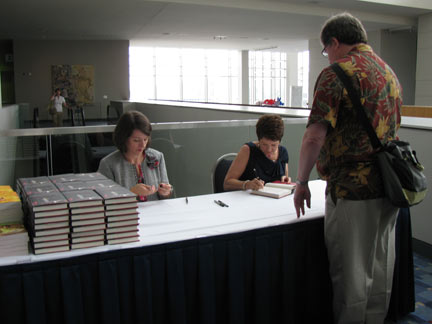 After their talk, I got in line, and the publisher gave everyone a free copy of Traveling with Pomegranates, which both authors signed.  I was completely inspired and uplifted by the time I walked away.

Next on my schedule was the Margaret Edwards Award Luncheon, honoring Jim Murphy for his lifetime achievement in the field of literature for young people.  Jim Murphy writes amazingly immediate nonfiction for children.  There was a copy of one of his books on our chairs.  I got to sit next to blogger Liz Burns, and Fairfax County Librarian Shannon Seglin was nearby, sitting at the School Library Journal table. 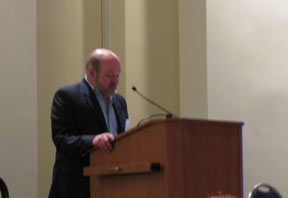 After a yummy lunch, Jim Murphy spoke about his process of writing and getting at primary sources, and his innate curiosity that fuels his great books.  He had some nice stories of serendipitously discovering material that later became the meat of his classic books.

After lunch, I went to a session called, “Everyone’s a Critic: The Future of Book Reviewing.”  The panel included the founder of GoodReads, a New York Times Book Critic, and a blogger and librarian, moderated by a reviewer from Booklist.

The session was interesting and fun to listen to.  All the panelists agreed that there is room for everyone, that the different review sources have different purposes.  They did point out that one of the strong points of professional book reviewers is that they are excellent essayists.  Their reviews are good reading, whether you want to read the book or not.

Next, I rushed down to the exhibits and got two books signed by Diana Peterfreund.  I met her back in October at the Kidlitosphere Conference, a few days after I had written a review raving about Rampant.  One of the Advance Reader Copies I was the very most excited to get was her sequel, Ascendant.  It’s not out until October, and now I don’t have to wait!  I also bought my own personal copy of Rampant for her to sign since I liked it so much. Killer unicorns rule!

And right next to Diana, who should be signing but Sarah Blake, the author of the excellent book sitting on my bedside table at the time, about three-quarters done, The Postmistress.  While I was there, I got a signed copy.  Very cool!

After that, I went to “Science Fiction and Fantasy: Informing the Present by Imagining the Future.”  This wasn’t so much a panel discussion as it was five distinguished authors speaking on that topic.  They were good!

Here are some things I particularly liked that they said:

Dom Testa  (He’s on the far right behind a fan.)

The visionaries provoke us into thinking.  Their greatest contributions are their ideas.

Science Fiction can be the driving force behind good things, not just defense against bad things.

Jane Lindskold (on the far right at the table — the rest proceed across to the left.)

Give kids something a little different: Imagination is key in any endeavor.

Libraries are the best place for the combination of knowledge and imagination to happen.

Science Fiction writers are always really writing about the present.

Science Fiction and Fantasy is talking about us right now — especially Steampunk.

“Steampunk is what happens when Goths discover brown.”

With Steampunk, you get to go back and change the rules that bound you.

It looks to the future by looking to the past.

Our culture has a fetish for the “real.”

SF and Fantasy write about real things “with dragons” or “in space.”

Fantasy writers are talking about NOW.

When people are more important than ideas, that brings people together and does great things for our world.

Alas!  The only thing I didn’t like about that session was that even though I got there before they started, I did not get one of the bags of books the publishers were passing out, to get signed after the talk.  They definitely got me wanting to read their work.  (Brandon Sanderson is the only one of them whose work I have read — and I did get a signed copy of his second Alcatraz book that morning.)

After so much inspiration, I finished the day off by going to the Opening General Session with Toni Morrison speaking.  Good stuff!

I didn’t stay for evening programs, because I was hoping to get plenty of sleep and get there bright and early the next morning for the bloggers’ session.  Unfortunately, I got to posting pictures on Facebook and was way too excited to sleep.  The next day was the pinnacle of the conference…