It’s time for another installment of A Universalist Looks at the New Testament because today’s Scripture passage was Mark 9:30-50.

Before I talk about the passage, I’m going to post a pretty picture from a Sonderquote I just posted from a book on universalism. 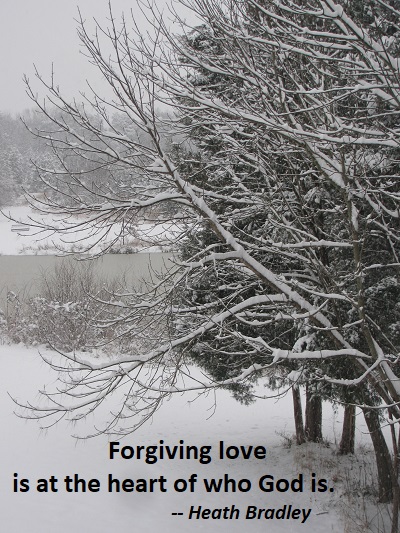 But Mark 9:42-48 is a passage that people use to say that Jesus taught that sinners will go to hell.

Again, I do believe in hell and judgment, actually — but not that it will last forever. But I don’t think Jesus is even talking about that here.

The word that’s been translated “hell” is the Greek word Gehenna.

Rather than try to explain it myself, for this one I’m going to quote from two other universalist authors.

First from Randy Klassen’s book, What Does the Bible Really Say About Hell?, pages 46-47:

“A great millstone hung around the neck,” “unquenchable fire,” “hell, where their worm never dies,” — such are the colorful terms for God’s judgment on those sins. The language is typical rabbinical hyperbole. The image of fire is a perfect metaphor for the fire of God’s judgment. Jesus no more intended a literal description of hell than for his hearers to cut off their hands or legs or pluck out their eyes. Moreover, it is hardly consistent with all resurrection passages to imagine the saints rising with limbs or eyes missing!

Since we do not take literally the drowning with a great millstone around the neck, nor the mutilation of the body parts that offend, is it not inconsistent to take these references to hell as literal? Yet time after time does one read reference to this passage as proof that Jesus taught a literal hell!

It is probably appropriate here to examine the word translated as “hell.” It is Gehenna, the name of the Valley of Hinnom, the ever-burning garbage dump southwest of Jerusalem. It had an evil history. Under the depraved leadership of King Ahaz, Israel was encouraged to worship the god Molech and burn little children there as an offering to this pagan god. King Josiah put a stop to that practice and labeled the area accursed. Thereafter Gehenna became a sort of public incinerator. Always the fire smoldered in it, a pall of thick smoke lay over it, and it bred a loathsome kind of worm that was hard to kill. Often the bodies of the worst criminals would be deposited here.

George W. Sarris brings up the same things in his book Heaven’s Doors, and has some things to add, beginning on page 118:

What comes to your mind when you hear the word Auschwitz?

In the future, it’s possible that the word will take on a more metaphorical meaning. But right now, while the actual place still exists as a museum and in the memories of some who knew it firsthand, it reminds us of the repulsion, shame and horrible deaths experienced by those who suffered in Nazi concentration camps in World War II.

During the time of Jesus, Gehenna was well-known as a specific location near Jerusalem that had been associated with gross idolatry in the past and was then used as the common sewer of the city.

The corpses of the worst criminals were flung into it unburied, and fires were lit to purify the contaminated air. For the Jews of that day, it also implied the severest judgment that a Jewish court could pass on a criminal — throwing his unburied body into the fires and worms of that polluted valley.

Like Auschwitz, Gehenna was a place the people of Jesus’ day could actually visit. It spoke to them of repulsion, shame and horrible death. Instead of experiencing honor like their ancestors whose bodies were treated reverently when they died, those cast into Gehenna would experience the immense dishonor associated with those whose bodies had been disposed of in a dump to become an object of scorn for the masses….

Gehenna was definitely a reference to God’s judgment. But it was a judgment on earth. It was considered a temporary place of punishment. It never meant endless punishment beyond the grave.

The authors of the Apocrypha written between 500-150 BC, Philo who wrote around AD 40, and Josephus who wrote from AD 70-100, all refer to the future punishment of the wicked, but none of them ever use the word Gehenna to describe it.

He does have more to say about when Gehenna started being used differently — much later than Jesus. And even when it was seen as a place of future punishment, it was not eternal.

He’s got a whole chapter on Gehenna if that’s not enough, and I highly recommend the book!

I found another author who mentions Gehenna. Thomas Allin in Every Knee Shall Bow points out that bodies were already dead when they were thrown into Gehenna — so this wasn’t even talking about torment.

While I believe our Lord did not threaten everlasting torment if His words are correctly understood, yet they do convey a solemn warning to sinners. This warning should hold more weight than threats of eternal torment because the conscience can see the justice in it.

So that’s why I don’t think this passage contradicts universalism.