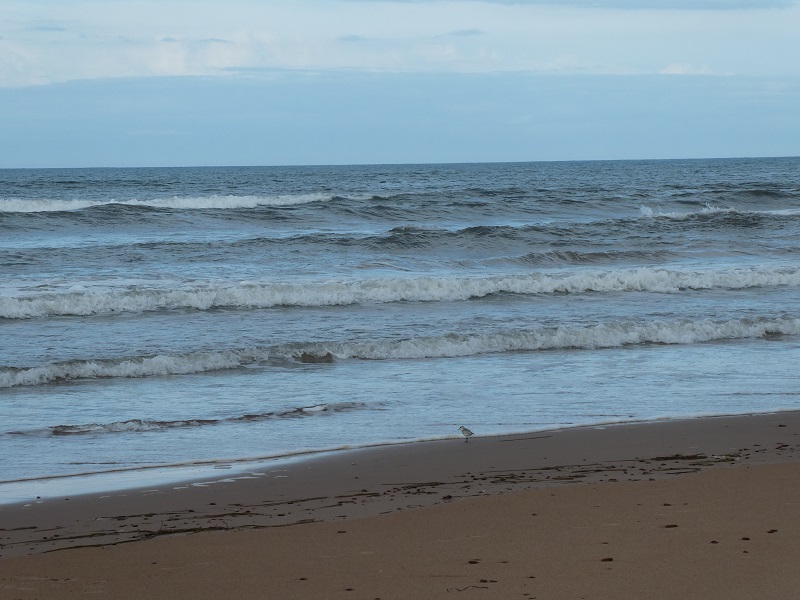 Who is a God like you,
who pardons sin and forgives the transgression
of the remnant of his inheritance?
You do not stay angry forever
but delight to show mercy.
You will again have compassion on us;
you will tread our sins underfoot
and hurl all our iniquities into the depths of the sea.

Hurl all our iniquities into the depths of the sea.

My photo above isn’t right for this, since my picture is of the edge of the sea, not the depths of the sea, but it was the best recent sea picture I have. But there’s no chance the waves are going to bring our iniquities back to shore.

Now, I understand that confession is important. I learned I John 1:9 by heart when I was a little girl — “If we confess our sins, he is faithful and just to forgive us our sins and to cleanse us from all unrighteousness.”

But I was also taught as a little girl to “keep short accounts with God” and that “sin demands payment” — and the result is the idea that God’s willing to forgive, but he’s keeping track — and you’d better confess every single sin of omission or commission, or he’ll sternly disapprove.

I don’t think that’s what God is after.

Look at how God is portrayed as the Father in the parable of the Lost Son (Luke 15). The son was ready for a profuse apology, but the Father didn’t even listen to that.

But while he was still a long way off, his father saw him and was filled with compassion for him; he ran to his son, threw his arms around him and kissed him.

At the end of my marriage, my ex-husband gave me a long list of ways I had hurt him over the years. I groveled and cried and apologized — but he didn’t accept my apologies. That’s what it’s like when someone demands payment.

God does not hold grudges! He doesn’t require us to make up to him what we have done. He simply wants us to be free from sin.

The Lord is compassionate and gracious,
slow to anger, abounding in love.
He will not always accuse,
nor will he harbor his anger forever;
he does not treat us as our sins deserve
or repay us according to our iniquities.
For as high as the heavens are above the earth,
so great is his love for those who fear him;
as far as the east is from the west,
so far has he removed our transgressions from us.
As a father has compassion on his children,
so the Lord has compassion on those who fear him;
for he knows how we are formed,
he remembers that we are dust.

I think conscientious Christians can especially get ourselves feeling guilty for sins of omission. For example, I’m sick today, but starting to feel better — did I do enough good things?

He loves us, even though we are as yet imperfect.

And though we’re told to confess our sins, and we’re told to examine ourselves, I think we can overdo it if it gets into guilt and groveling. We are God’s children. He’d like us to enjoy his presence instead of spending our time with him apologizing for things in the past.

George MacDonald shook up my thinking about this in the chapter “Salvation from Sin” from his book The Hope of the Gospel. (You can read it online through the link above.) Here’s a passage I especially love:

Not for any or all of his sins that are past shall a man be condemned; not for the worst of them needs he dread remaining unforgiven. The sin he dwells in, the sin he will not come out of, is the sole ruin of a man. His present, his live sins—those pervading his thoughts and ruling his conduct; the sins he keeps doing, and will not give up; the sins he is called to abandon, and clings to; the same sins which are the cause of his misery, though he may not know it—these are they for which he is even now condemned.

What does all this mean? I don’t know about you, but when I’m at the start of a new year, I start to think about, What did I do badly last year? What ways do I need to do better this year?

What if instead I think of God taking everything I did wrong or poorly in 2019, all my flaws and failings of 2019 — and hurling them into the depths of the sea?

And then I pray: Lord, have mercy on me, a sinner. Help me to live the life you’ve called me to and walk in your love today.

But even as I pray that prayer, I imagine the Lord interrupting me and saying, “Quick! Bring out the best robe and put it on my child!”

Guilt and groveling? I don’t think God even wants me to think about those ways I’ve failed him. Otherwise, he wouldn’t have hurled them into the depths of the sea.