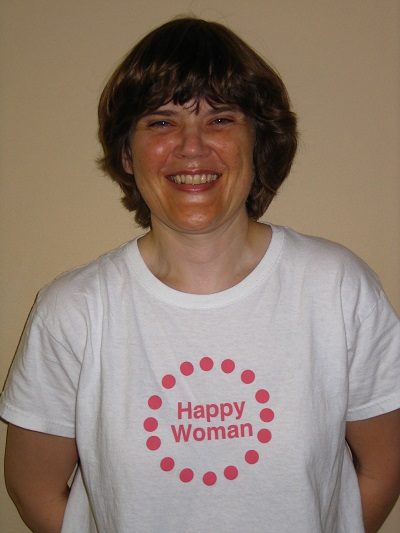 Last time, I mentioned that my 44th birthday was also the day I marched in graduation to get my Master’s in Library and Information Science from Drexel University! I had finished the degree in December 2007, but when I learned that graduation would happen on my birthday, I had to attend! After all, I’d gotten my Math Master’s on my birthday 21 years earlier! 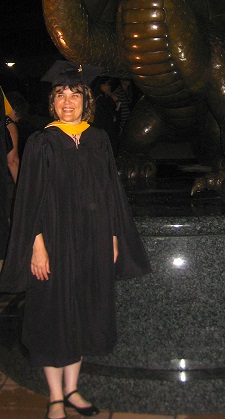 The next morning, still in Philadelphia, I met for breakfast with some of my distance-learning classmates. That weekend was the first I met them in person! We all really enjoyed actual face-to-face talk. 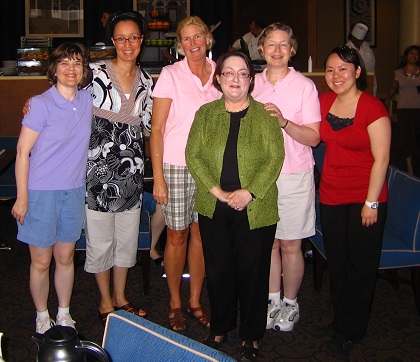 And on the way back to Virginia, I stopped in Longwood Gardens and had a lovely time taking pictures. I was still absorbing that I could go somewhere beautiful, by myself, and could take pictures to my heart’s content and take my time walking in a forest or a garden – and it wouldn’t bother anyone at all. 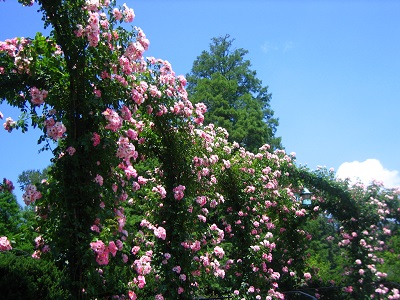 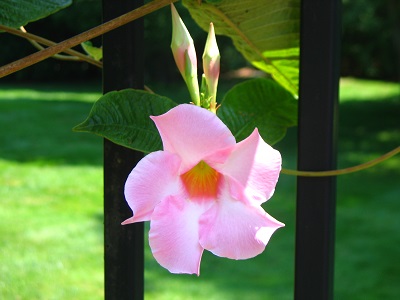 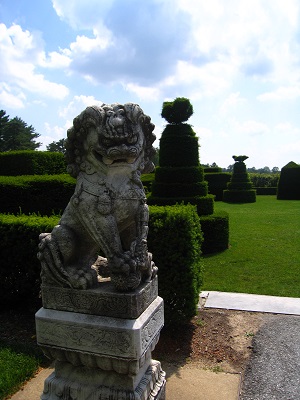 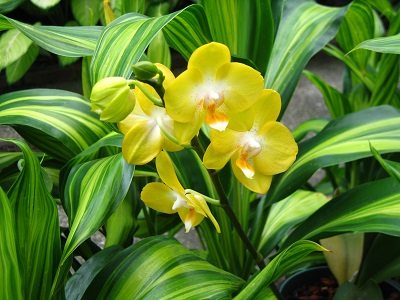 That lovely weekend symbolizes part of how my life was going at that time: Wonderful! Dreams were happening. I was embarking on a new life and now had a career and a calling.

I believe there’s always a bright side. I definitely did not want to get a divorce, but since it looked like that was going to happen, I was finding lots of perks. Becoming a librarian was one of those. Taking vacations completely centered around what I wanted to do was another.

The other part of my life was things with Steve. He’d come back to America in August 2007 and had filed for divorce soon after. I’d figured out that I couldn’t stop it, though I was getting more and more enthusiastic about the emails I received from rejoiceministries.org. They encourage you to stand for your marriage and teach that divorce is always wrong. I’ve come to disagree with that part, but where their teaching was good was encouraging me to listen to God’s voice, and to attempt to respond with love and compassion.

But the more I tried to respond sweetly to Steve, the angrier he seemed to get. I tried to insert loving and kind thoughts into the everyday emails trying to arrange Tim’s visitation – and he told me I was harassing him. He renewed the old accusations he’d used to explain why it was all my fault we were getting divorced and why he couldn’t live with me. I was trying to respond sweetly, so I didn’t answer back, didn’t mention that those things didn’t seem quite a good excuse for having an affair – but fortunately I had several girlfriends and mentors I was writing to who could give me the perspective of Truth and help me stay sane.

Though that other part of my life was tough, make no mistake. I still couldn’t forget what a good husband Steve had been for so long – but I was starting to understand that he had truly changed. I was still praying against the divorce, but it sure didn’t look like anything could stop it. I started thinking big picture. I heard a testimony of a woman named Sondra whose marriage was restored after ten years. What did I want my life to be like in ten years? Maybe I could live that way.

Here’s from an email prayer request I wrote to my small group that June:

Tomorrow (June 12) is the first court date in my divorce case.  It’s not a big important court date, just a scheduling conference — but it makes me feel better to ask for prayer.

They will have a conference with both lawyers and schedule two trial dates — one for custody/visitation issues, and one for everything else — support, property division, and grounds for divorce.

My lawyer and I are still hoping the case will be settled without having to go to court.  She tells me that we can still make an agreement and avoid a trial right up until the trial dates.

So my gut reaction is to pray for very late trial dates — but mainly I’m just wanting to put the scheduling in God’s hands, because only He knows how the timing will work out best.

The status of the case right now is this:

Steve’s lawyer sent a very vague settlement proposal in January.  My lawyer decided to draft a detailed settlement proposal in response — in legal terms ready to be signed.  Around February, we got notices from Steve’s lawyer asking us to hurry up, that Steve wanted it settled as quickly as possible.  (My lawyer responded essentially that he would just have to wait!)

About a month ago, my lawyer and I sent over our settlement proposal.  It is asking for quite a bit more than what Steve was offering.  We haven’t heard a thing back yet.  It is possible that my lawyer will find out more at the scheduling conference, since she will be talking to Steve’s lawyer.

An interesting thing is that if we don’t have a custody agreement in place by tomorrow (and we don’t), then we will be required to attend parent education classes and watch a video about kids and divorce.  My lawyer says that her clients have said that this is good material….

As for the rest of my life:

Things are going great.  Tomorrow I do my last Booktalk for this year.  I have been thoroughly enjoying doing that, and I’m thrilled that I’m enjoying it.  Because it bodes well for the job.  Today we also — myself and other staff members — had a lot of fun making displays around the library for the Summer Reading Program.  You can sign your kids up starting Friday at any Fairfax County Library!  But come to my library!

My big decision recently regarding my marriage is this:  I am planning to live as if Steve is coming back — in ten years.  I still hope it will be sooner, but I am trying to live as if it’s a far-off certainty.  That helps me tackle the daily challenge of not obsessing over little things.  (Like:  Should I send him a Father’s Day card.  And what I would say.  And on and on….  No, in ten years he will appreciate it….)  So that’s what I’m trying to do….

But then I thought about what I want my life to be like in ten years.  I want to be:

1.  JOYFUL.  I want to be resentment free, and a great librarian, doing a meaningful job and enjoying it.

2.  A published writer.
With that in mind, I’ve gotten busy again, doing a little editing every day.  And I sent a query out to the editor I met in Paris!  Yay!  I told her, basically, “You said in Paris that I could send you my manuscript.  Is the offer still good 2 1/2 years later?”  This is a middle-grade fantasy novel.  While I’m waiting for her answer, I’m polishing it up, and plan to either send it to her, or to look for another editor to send it to.  But it feels great to be writing again.

3.  Responsible with money.
Whatever support I get from Steve, I don’t want to squander it, especially if I have to face him in ten years!  At that time, I’d like to be a financial asset, not a financial drain.

But having the big-picture view is proving very helpful to me….

I was writing in this blog by then, and here’s a post on Big Picture/Little Picture thinking.

[Spoiler alert: I never did get any of my writing published. But since that would have kept me from being on the 2019 Newbery committee (Woo-hoo!), the big picture says that’s fantastic. I can try to get published after serving on the Newbery committee.]

That summer, Tim had his first extended visit with Steve. I took him down south to meet Steve on July 5th and got him back on July 19. That one time, I thought I’d make the most of it and did some hiking at Lake Anna after I dropped Tim off on the 5th. (I never tried that again, but it was really nice.) 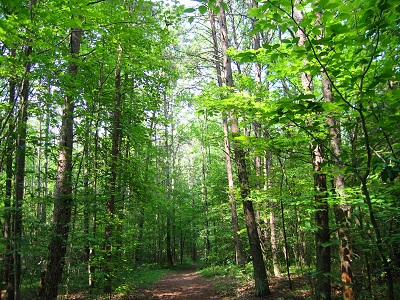 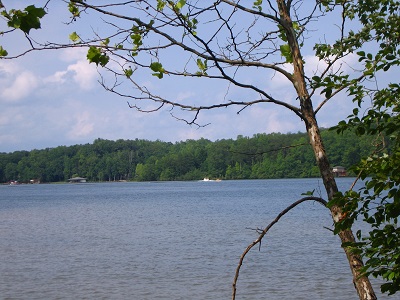 Tim turned 14 years old when he got back. And the cake I made him completely fell apart! 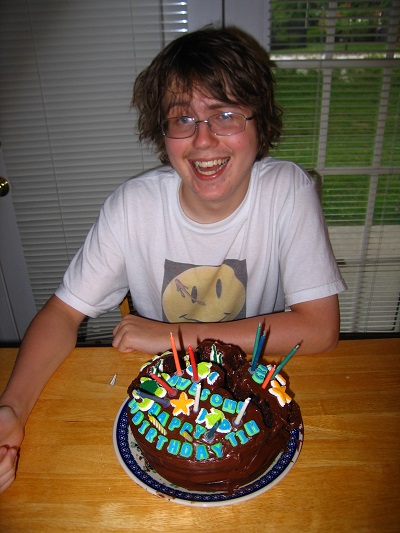 Oh, and that summer I read the book What Happy Women Know, and I was determined that, Doggone it!, I was going to be a Happy Woman. I got a t-shirt with the book’s logo, which is the picture above.

But it was a struggle. A struggle that God was helping me win. But a struggle. I was still getting lots of anger and lots of accusations from Steve. But I was focusing on New Life and New Horizons.

And then in August it was time to drive to Orlando, Florida, for Josh’s graduation from college!

Jade (then called Josh) had finished their course at Full Sail Real World University as a Film major, learning real skills to actually make movies. It was a year-round school was how Josh finished in 2 years. And that was a good thing. The winter before, after we had finished paying all the tuition (well, my Dad had, plus loans), Josh told me, “I think I’ve learned everything Full Sail has to teach me.” I almost panicked when I heard those words but said, “If I buy you a ticket to Los Angeles after graduation, will you stay through graduation?” Josh agreed, sounding a little reluctant. But I was breathing a big sigh of relief now that graduation was actually here!

Tim and I arrived a week before graduation. We invited Josh to go to amusement parks with us, but Josh passed on that. We drove down. Darlene loaned us her GPS. I used it to try to find a bookstore to buy Stephenie Meyer’s fourth book Breaking Dawn, which had just come out. (First try got us lost and I got pulled over! And was pretty incoherent trying to explain myself to the trooper.) Anyway, I remember I read it on the trip, because I burst out laughing and woke Tim up when I [Spoiler Alert] read that Jacob had imprinted on Renesme.

Our first park was Universal Studios on Monday. 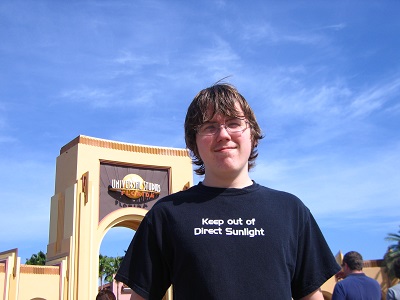 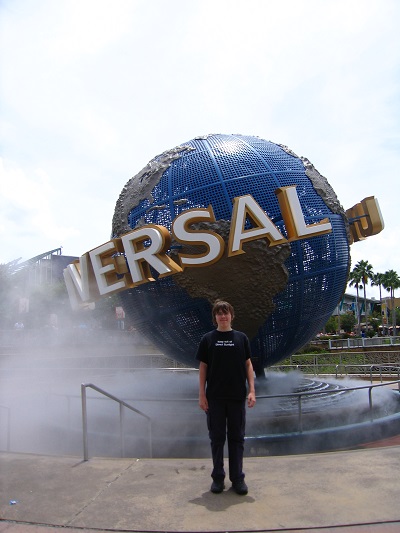 That night, I took Tim to stay with Josh, and then I drove a couple hours to Pompano Beach, because Rejoice Ministries had a monthly gathering for people standing for their marriages, and I was there at the right time! I met Charlyne Steinkamp, who wrote the daily encouraging emails. 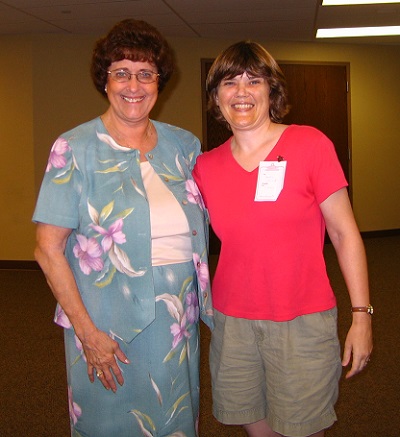 The next day, we went to Universal’s Islands of Adventure. I loved the Seuss-themed part! 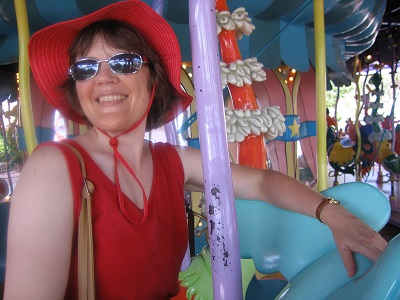 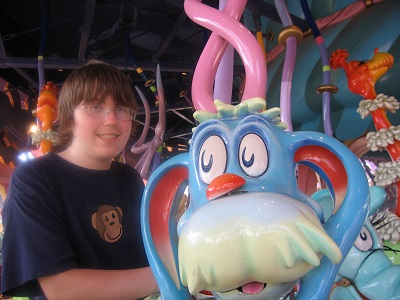 My favorite part was The Street of the Lifted Lorax! 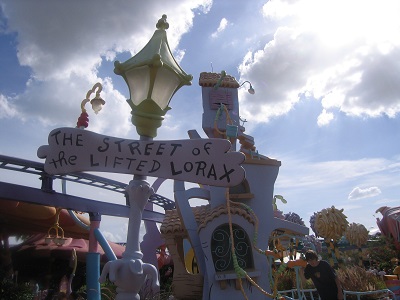 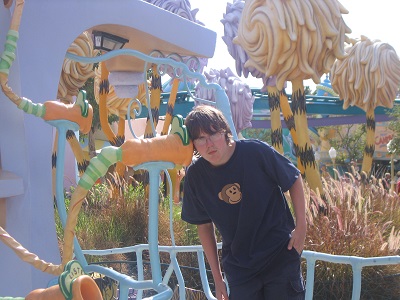 And then it was finally time for Disneyworld! 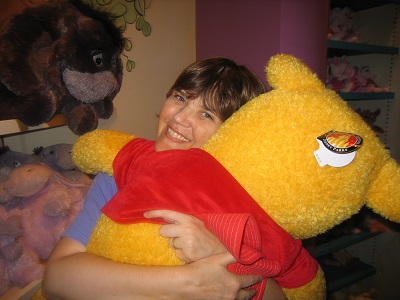 I always love relaxing on Tom Sawyer Island at Disneyland. It looks like Disneyworld had one, too. And there was a great white egret! 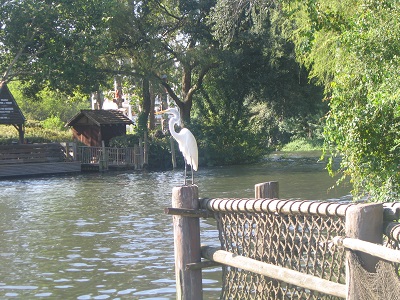 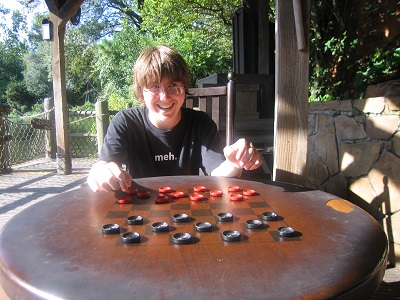 But first, he used my car in the morning to get a Florida Driver’s License! 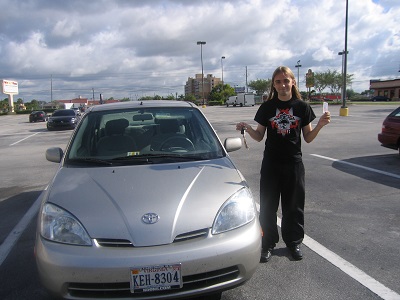 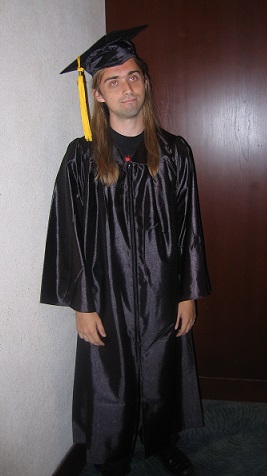 After graduation, we all had dinner together — Josh, Tim, me, Steve, and Steve’s parents. My first child had graduated from college!

And this week, I think I’m going to take it a piece at a time. So I’ll stop with those two graduations.