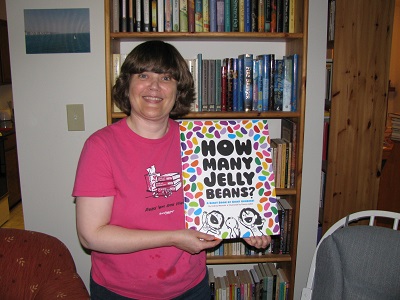 Last time, I covered Tim’s graduation from high school, our trip to California, and my Declaration of Independence after the last divorce case was finally done and the last child support check received and future checks in the hands of the Department of Defense.

That summer, I was still recovering from my stroke the year before, still not having much energy, and having lots of trouble with vestibular migraines and headaches.

But it also sounded like the Youth Services Manager position at my very own branch would maybe become open soon! Our current manager was applying to be an assistant branch manager at other branches.

And, now that Tim had graduated and I didn’t have to stay in Fairfax County in order for him to continue at his high school – I was wondering if it would be a good idea to try to buy a home.

But should I stay in Virginia? Well, Tim going to a state school was making that seem like a good idea for at least another four years. Though my oldest, Jade (then called Josh), was now in Portland, Oregon, and I did love Oregon.

And remember that I was currently an adult services librarian, not in youth services, which I loved so much. I wasn’t sure I shouldn’t be looking for a job elsewhere. And meanwhile, I was interviewing for a youth services manager position in Loudoun County. And all the time I had my eye on the Youth Materials Selector position for Fairfax County.

So I did a lot of praying.

And got a lovely answer to prayer about whether to buy a home on July 11, 2012. Now, Dear Reader, I knew this might all be my imagination. I wasn’t stopping praying with this answer. But it did encourage me to keep on – and looking back four years later, that was a fantastic thing to do.

Here’s what happened, from my quiet time journal:

Isaiah 54:2
“Sing!…
Enlarge the place of your tent,
stretch your tent curtains wide,
do not hold back;
lengthen your cords,
strengthen your stakes.”

Lord,
I was looking for a verse for today, trying to head for Psalms. And I was going to ask You if I really should buy a place.

Then my eyes fell on this verse.
I’m going to take that as a Yes, Lord!
Thank You!
If I’m wrong about that, show me.
I still need guidance about my next job.
I still need guidance about where to move.
Lord, my vestibular migraine seems better today. I pray that they would stop being a problem.
Show me how and where to enlarge the place of my tent.

Yay! I see a note that on July 27 – so one year after my stroke – I had worked two full pay periods without taking any leave at all. (But it did take a full year to get there.) 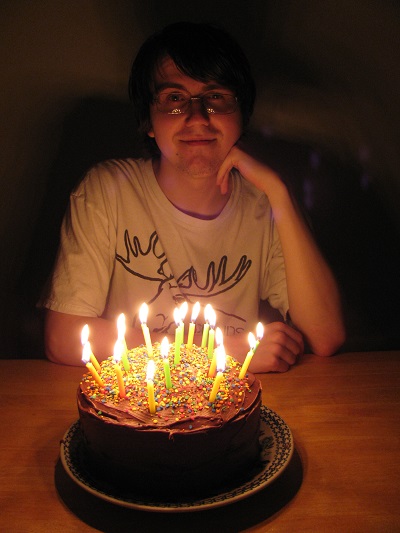 And then in early August, before I heard the results of the Loudoun interview, I found out I’d get to interview for the Youth Services Manager position at City of Fairfax Regional Library, where I was already working.

At the same time, I was still very worried about my health. Lots of headaches, lots of neck pain. I got a referral to talk to a vascular surgeon. I was hoping maybe surgery would be the answer. (Spoiler: I never did convince a surgeon. And got quite a bit better over the next few years – though just this morning, in 2017, I woke up with my neck hurting precisely where my right vertebral artery is. But I haven’t had another stroke yet, anyway!)

However, despite my worries that day – the interview on August 13 went great!

My branch manager, Kathy, kept smiling encouragingly at me, so it was hard to be nervous! And it felt lovely that I knew the Fairfax staff was rooting for me – especially the two people I’d be supervising if I got the job. That vote of confidence really helped!

I was later told that all of the interviewers rated me the highest. And Kathy said I was the only one who mentioned working in the Virginia Room (added value to working at Fairfax).

But I have to say here – If I had never been cut from my job at Herndon, there’s no telling if I would have gotten this wonderful job at Fairfax (where I still am now). Getting RIF’d was horrible and devastating and sad – but then it brought me to Fairfax as a Librarian 1 – which put me in a great position to get the Youth Services Manager promotion.

And I still have that job and love it and am thriving here.

And I know God knew what was in store for me when I was praying that my job at Herndon wouldn’t get cut.

Oh, and look! On August 17, I got the call that I would be on the Newbery ballot the next March! Hooray! And so I started dreaming of being on the Newbery committee. I stopped participating in my email critique group (which hadn’t been real active lately anyway) and stopped sending out queries about my own writing. I figured this was my chance to be on the committee, and I could always keep trying to get published later. Theoretically, I was going to keep writing – but what actually happened was I let it go for awhile.

But meanwhile I was so excited to be on the ballot!!!

Anyway, cutting to the chase: I ended up missing being elected by 15 votes out of more than 800 votes – that time. But this year, in 2017, I did get elected! And this is a much better time to be on the committee, what with my empty nest. And it’s all working out for good again!

I also have these pictures from August 19. I finished my Prime Factorization Scarf! 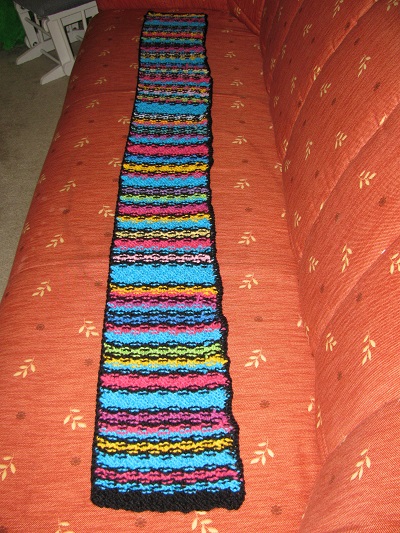 And I began my Prime Factorization Cardigan, using the same idea (and the same yarn) of using stripes for each number, rather than squares. 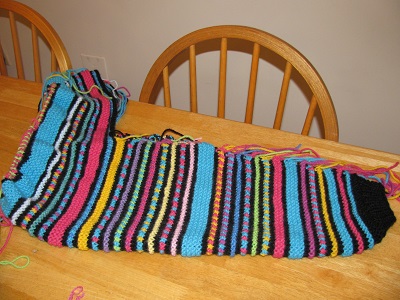 But then, on August 23rd, I took Tim to William and Mary for Orientation. Tim moved into the dorm, and I got a hotel room for a night. (The only time I spent a night when I went down there, but they had activities for parents, too.)

I laughed at the way Tim labeled this box. It had Flingshot inside, the monkey you can fling, and that screams when you do. 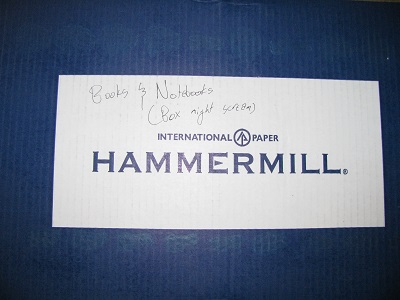 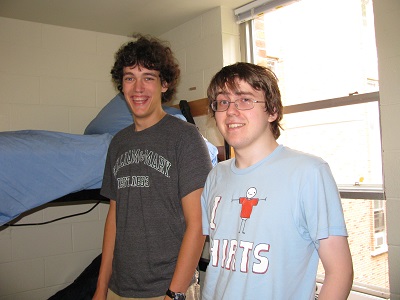 Orientation stuff. We parents were up in the stands. 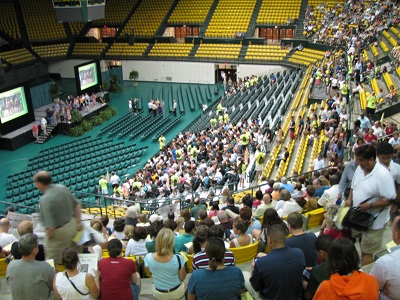 Williamsburg is beautiful. Over the next four years, I loved going down there to pick up Tim. We’d often have dinner outside, enjoying beautiful Williamsburg. 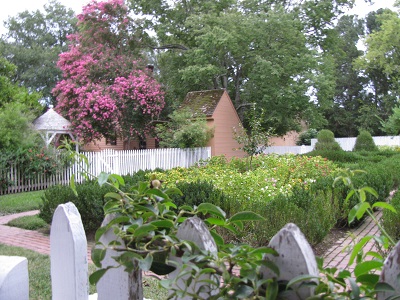 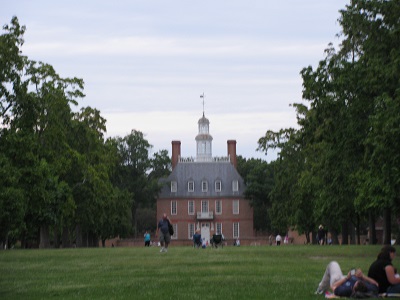 They have a fun tradition for Freshmen with a parade and fireworks! 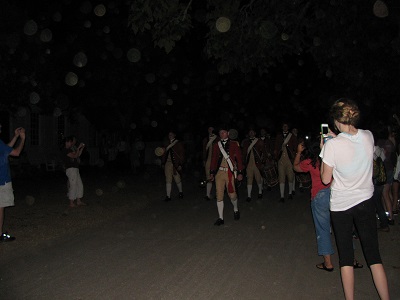 And so began my Empty Nest. It hit me hard at the time, especially with my divorce being final so recently. (Well, at least the last court case finishing so recently.) I still say that if you still have your spouse, you don’t know what a truly Empty Nest is like.

However, now looking back, my nest didn’t seem so empty then. I mean, I got Tim back for vacations! Now he lives on the other side of the country….

But William and Mary was a good school for him. One lovely part was that Tim’s Dad lived nearby the college – so they could have all the time together they wanted during the school year. Tim came to me during vacations. But no negotiating whatsoever had to be done by me.

I had a cold after I left Tim in Williamsburg, so I felt rather mopey for about a week. But it couldn’t last long!

I was now Youth Services Manager at a Regional Library!
I was on the Newbery ballot!
I’d applied (the third time) to be a Cybils judge, and I got it!
I was looking to buy a home!

So a new phase of life was starting… And it’s late, so I’ll write about it tomorrow!