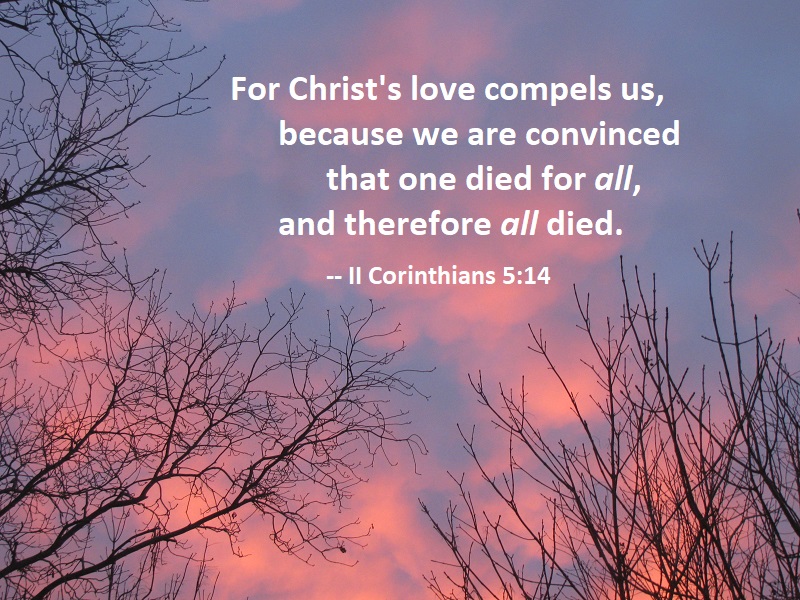 Somewhere around 20 years ago, I became a universalist after reading writings of George MacDonald.

George MacDonald’s writings clearly show that he loved the Lord with all his heart and that he believed the Bible and knew it well, referring to the original Greek often. When I realized that he was teaching that all will (eventually) be saved, I was puzzled.

The Bible doesn’t teach that, does it? And yet George MacDonald clearly thought it did.

So — I read the New Testament through, asking if it could be interpreted this way. Much to my surprise, it can!

Since then, I’ve read many more books about universalism. I discovered that for the first 500 years of the church, universalism was the prevailing teaching! I am now convinced it’s true — and how my heart rejoices in that belief!

[Please note: George MacDonald still believed in hell and judgment, but not that it will last forever and ever to infinity. Some day, at the end of the ages, all will be saved and the last penny will be paid.]

That brings me to my new blog series, A Universalist Looks at the New Testament.

Last October, my church began reading through the New Testament together, using a booklet that assigns readings from the gospels and from the epistles for each day.

While reading through the New Testament, I’m making note of the passages that relate to universalism. I was pointing them out to a friend in emails, but decided I wanted to make them blog posts. And today’s passage — II Corinthians 5:11-21 is a wonderful, epic place to start. (I will catch up on what we read last October through December — probably this coming October through December.)

The most obvious places to start, in fact, are the ALL verses.

Look at II Corinthians 5:14-15 — “For Christ’s love compels us, because we are convinced that one died for all, and therefore all died. And he died for all, that those who live should no longer live for themselves but for him who died for them and was raised again.”

Does all mean ALL there? Or only some? If Jesus died for all, and therefore all died in Him — won’t all receive life?

Please just sit with the idea that all means all.

But there’s more I want to talk about in this passage.

This part is not universalism. But George MacDonald also took great exception with any theology that taught that Jesus had to save us from God. He says many times in his writings, “There is not one word in the New Testament about reconciling God to us; it is we that have to be reconciled to God.”

I’ve read other writers about the cross, and have come to think that evangelicals tend to overemphasize the “payment metaphor.” If we’re teaching that God could not forgive us without Christ dying a horrible death, I think we’ve got it wrong.

If we’re teaching that God can’t look on us because we’re so sinful, I think we’ve got it wrong.

But especially: God is not mad at us! God forgives. And Paul says here, “All this is from God, who reconciled us to himself through Christ and gave us the ministry of reconciliation: that God was reconciling the world to himself in Christ, not counting people’s sins against them.”

Notice: God is doing all the work. He wants to bring us to Himself. He loves us.

One more note: According to the Concordant version of the New Testament (which translates each Greek word of the original into only one word of English) and according to a note in the New International Version, verse 21 might better be translated: “God made him who had no sin to be a sin offering for us, so that in him we might become the righteousness of God.”

The sin offerings of the Old Testament weren’t ever thought of as payment for sins. When you sinned, you brought a sin offering to restore your relationship with God. But you were the one out of sync.

There’s a whole lot more I could say about this beautiful passage. I’ll leave it with these two things:

Does ALL mean ALL?

And notice that it’s people who need to be reconciled.