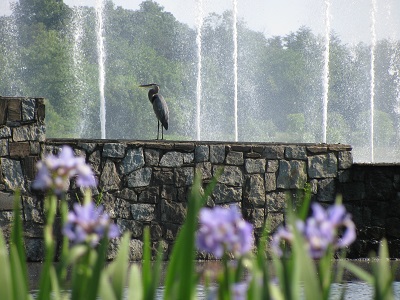 I’m on my annual Springtime personal spiritual retreat this week. Monday it began with me thinking about how happy my life is and how fulfilling so many of the activities I make a regular part of my life are, because they express who I am.

This was happening the day after, on Sunday evening, I got a message on an online dating site from a guy who ended up being a scammer. There were three big tip-offs: The first message was generic. (I specifically ask on my profile for non-generic messages.) The messages made it clear he was not a native English speaker. (That’s theoretically okay, but wasn’t obvious from his profile, so he was probably a scammer operating from overseas.) And the big tip-off, which I always always answer with a No was asking to go off the dating site right away. (And my No means they stop sending me messages.)

So Monday I was discouraged with online dating, but very happy with my life as it is. So I began thinking, Maybe I should give up on the whole idea of ever finding another man and getting married again. It would be nice, sure, but my life is good and I for sure don’t want to have someone in my life who doesn’t fit with me, who instead of appreciating the way the things I do express who I am, puts a damper on me doing those things.

In short, I’m content. That’s good. So why even bother with having an online profile? Maybe I should just plan on spending the rest of my life happily single.

The next morning, as part of my spiritual retreat. I looked again at the verse and theme I’d chosen for 2020.

The theme was “Shameless Audacity” — from Luke 11:8. Jesus has told a parable about someone asking for bread at midnight. “I tell you, even though he will not get up and give you the bread because of friendship, yet because of your shameless audacity he will surely get up and give you as much as you need.” And then he launches into verse 9, telling us to ask.

And I’ll be honest: What instantly comes to mind to ask God for is a man who loves me and loves God, a man for me to marry.

So I thought, I will ask again. I won’t completely give up on the idea.

But there was a problem with that. Yesterday I started feeling discontent. I was thinking more about what my life is missing and less about what I have.

This morning, while I went on my walk, I was thinking how to balance Shameless Audacity with Contentment. I don’t want to lose my joy and contentment because I’m asking God for the desires of my heart.

I do think God wants us to ask for the desires of our hearts. There’s this verse, and there are many others.

I think of the quote from C. S. Lewis, “We are far too easily pleased.”

But it feels selfish and greedy to ask for something more when my life is already so very good. In fact, wait a minute, it feels like shameless audacity.

And I think maybe that’s the way to pull the two together, to be content while still asking for more — and that’s to acknowledge that it’s shameless audacity by being grateful.

In fact, it goes back to Philippians 4:6 — “Do not be anxious about anything, but in every situation, by prayer and petition, with thanksgiving, present your requests to God.”

And rather than feeling discontent from doing that — when I acknowledge the shameless audacity and combine it with gratitude — I feel a whole lot of joy.

Because it reminds me that God the Father loves to give good gifts to His children.

While I was walking, I thought of another, much smaller request, that feels like shameless audacity. I haven’t seen the great blue heron who frequents my lake since the stay at home order happened in March. So, yes, for a few days I’ve been praying that I’d see one.

Well, this morning I acknowledged that the irises I’ve been taking pictures of this week have been amazing and stunning, so it’s shameless audacity for me to ask for something more, but yes, Lord, I’m going to ask to see a great blue heron.

And sure enough, a person walking a dog ahead of me startled a great blue heron, so it flew to the other side of the lake.

And I saw another fly by my window in the afternoon. (This is after not seeing one for more than two months.)

And maybe if God grants that small shamelessly audacious request, maybe He will grant the bigger one.

But I’m going to be shamelessly audacious and ask.