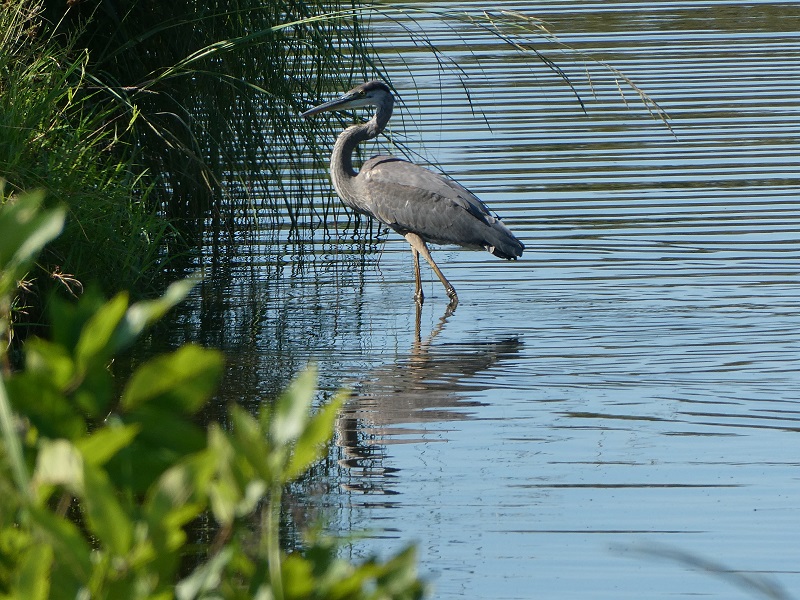 On Sunday, I received a wonderful gift.

I’d had kind of a grumpy week. I was scheduled to work six days in a row. (I’ll get a 3-day weekend this coming week.) I ended up taking one day off because of a light headache I just couldn’t shake. Every day at the library, I asked numerous people to please wear their masks, and I was starting to get angry about it. That persistent headache wasn’t helping, even if I knew it was just a migraine and I didn’t have a fever. On Saturday, I was person-in-charge and two people in a row displayed some aberrant behavior, though I was relieved that they did leave the library soon after.

All that to say, it was a stressful week.

Sunday was my day off. I hadn’t taken a walk by my lake in a week, so this was my opportunity, before online church. The week before I hadn’t even bothered to bring my camera, because I felt like I was taking pictures of the same flowers each time. But sometimes on Sunday mornings, I’d seen deer, so I brought my camera that day.

And my friend the great blue heron was there! Though the heron is a regular, I hadn’t seen much of him since the shelter-in-place order happened. Perhaps it didn’t like how many people walked by the lake. 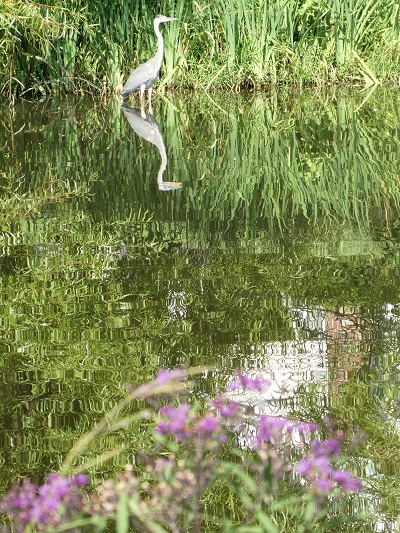 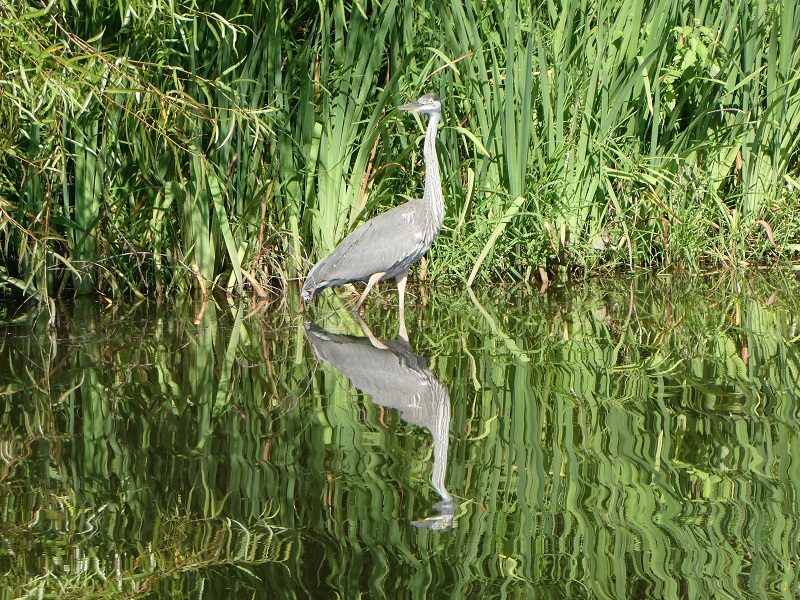 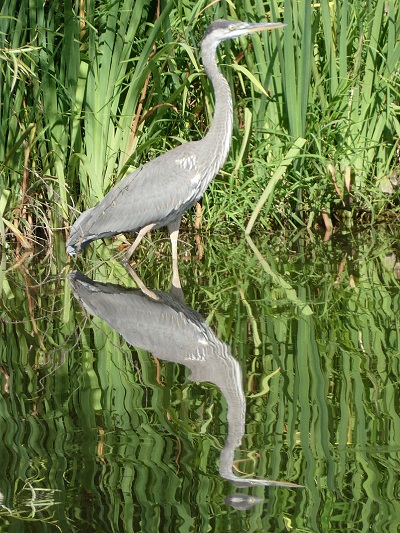 It even flew to the nearer side of the lake and I got the picture at the top of this post.

Then walking on. I spotted a butterfly whose wings were different on the inside and the outside. Patiently waiting, I got shots of both. 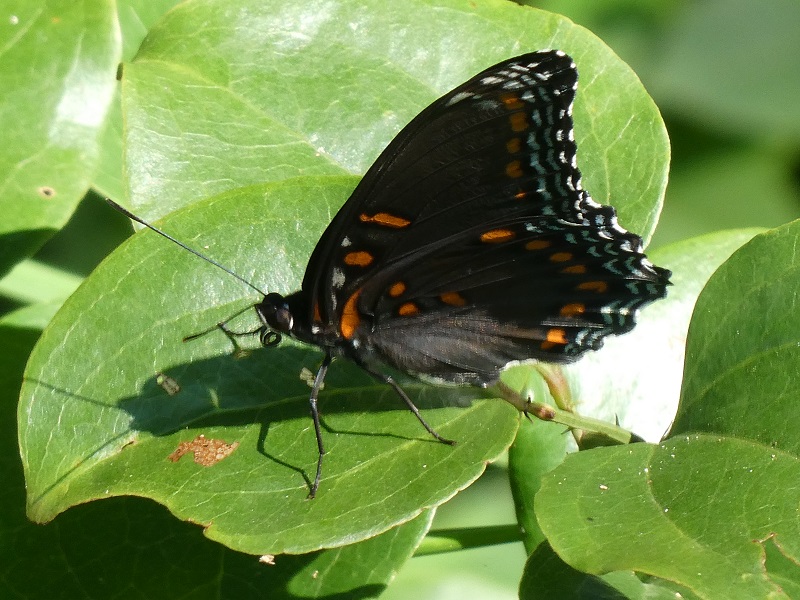 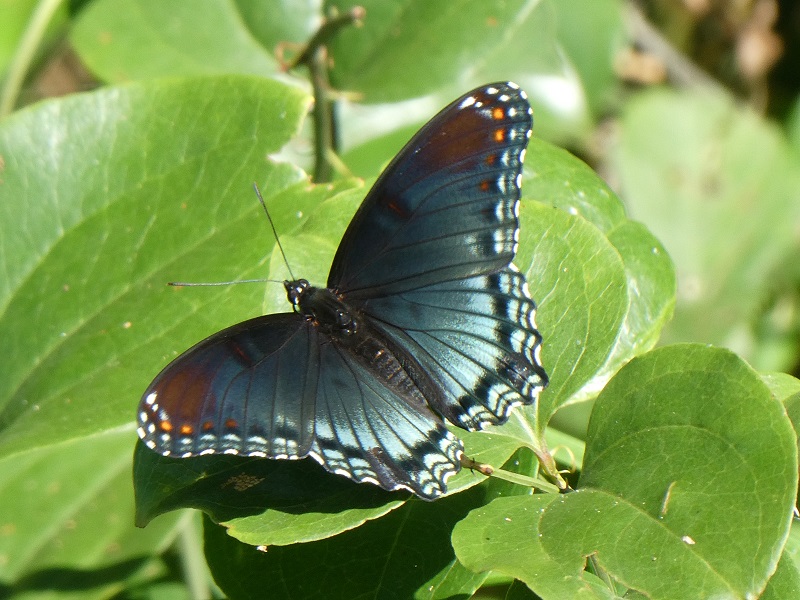 My walk takes me by the lake, then in a meadowy part with big bushes, then beside some woods. Then I turn around and come back. I hoped to see deer in the woods as I had the week before, but nothing this time. Instead, when I got back to the meadow, there was another butterfly, and this one was posed with the sun shining on its wings. When its wings were together, the sun didn’t shine through, but when it opened its wings, they lit up spectacularly as they were now thin enough to be transparent.

The butterfly was, however, a bit stubborn. I’d wait and wait for it to open it wings, and it wouldn’t do so until I lowered the camera. So catching a few times with the lighting felt like a triumph. 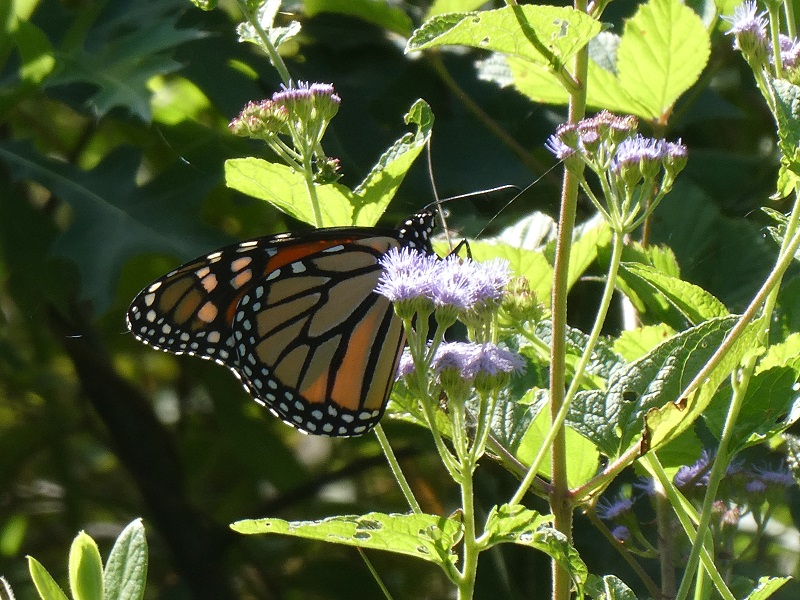 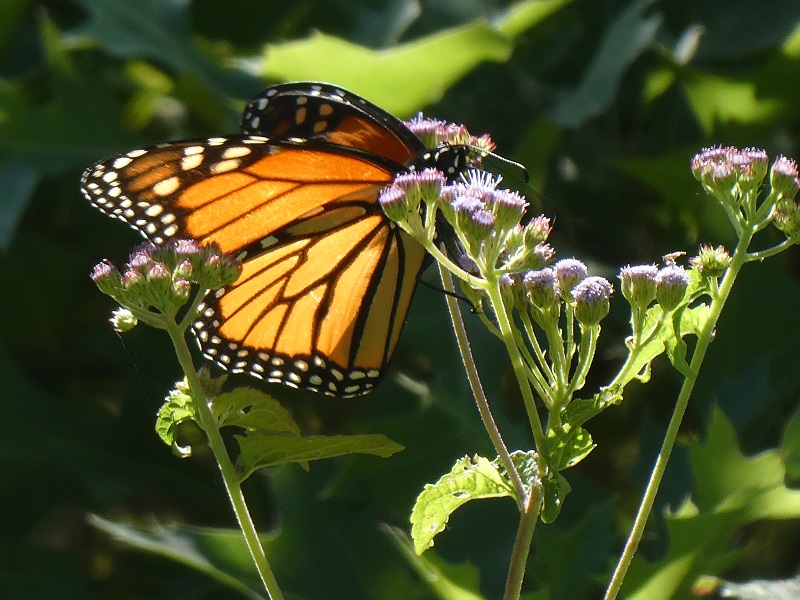 As I walked back toward the lake, in a place where the path is constrained by bushes on one side and the lake on the other — there in the bushes, right next to the path, two fawns were sitting and eating leaves.

What could I do? I stood and took pictures, of course. Eventually a jogger came by and joined me. When she decided to go on, that got one of the fawns to get up and walk out of the bushes. 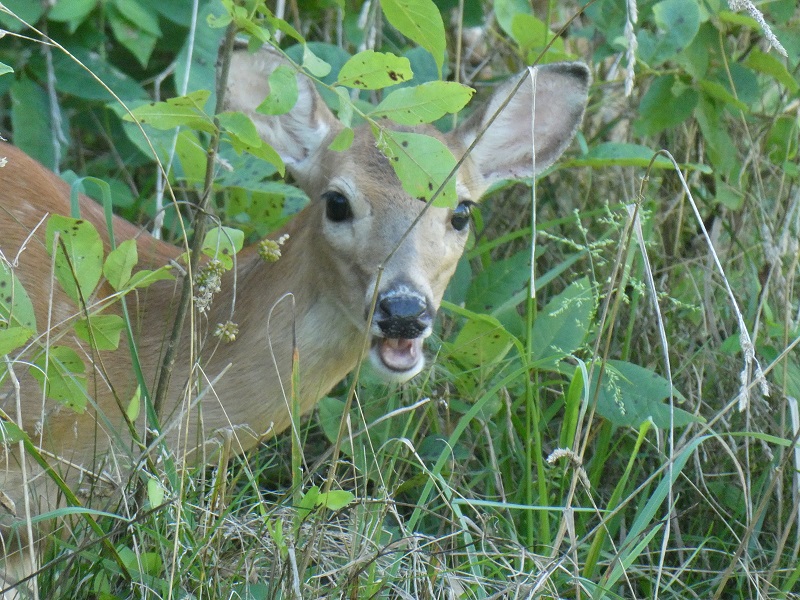 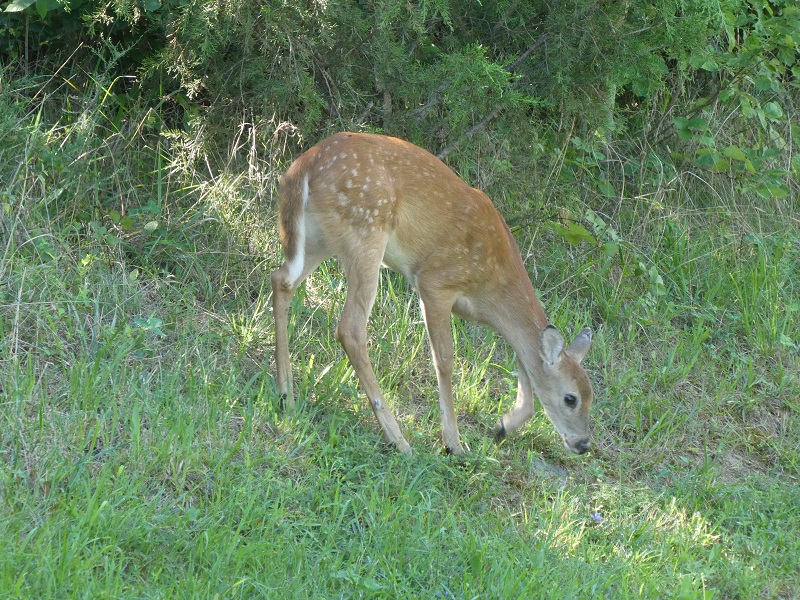 After that, I was wondering if the heron was still there, lurking behind the tall grasses where I couldn’t see it. As I checked, I heard an enormous splash and saw a bird rising up from the water. It turned out that an osprey was fishing in the lake and continued circling — in a way that tantalized me into trying to get its picture. 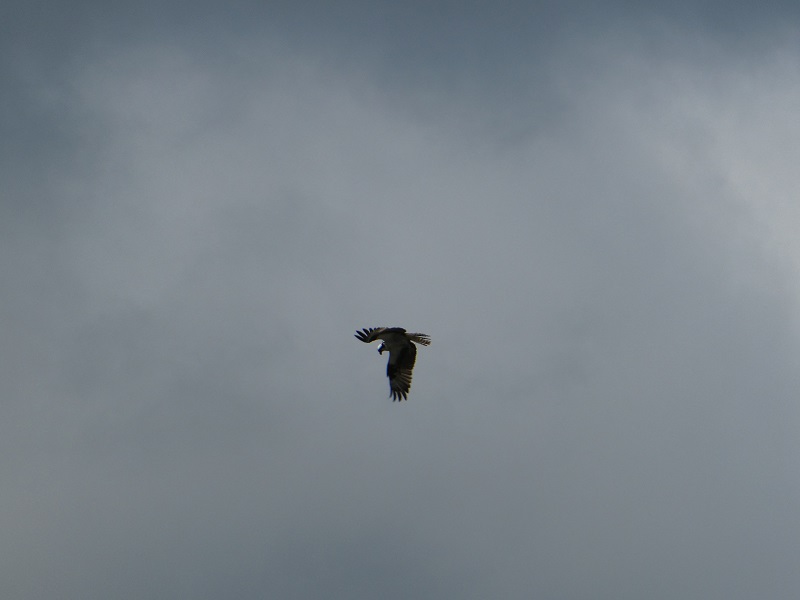 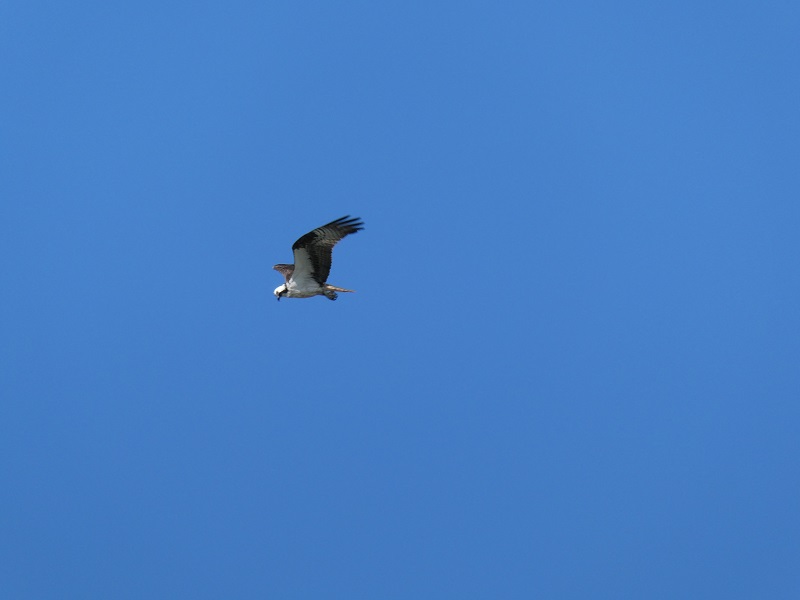 By that time, I felt simply overwhelmed with blessings.

Last time I blogged here, I talked about God giving good gifts to His children. This felt like gifts given with good measure, pressed down, shaken together and running over. My cup overflowed!

I hadn’t done anything to deserve such blessings. I’d been grumpy! But that got swept aside.

Then in the online church service, my pastor Barbara Miner talked about how Jesus notices us. The text was from the story where Jesus is going to heal a synagogue ruler’s daughter who has died, and a woman in the crowd touches the hem of his robe and is healed. Jesus, on an urgent mission, stops and turns and notices the woman. She must have been mortified! She wasn’t trying to be noticed! But Jesus calls her “Daughter.”

Pastor Barbara reminded us that Jesus notices us and challenged us to notice others.

And that got me thinking of my walks by the lake. When I don’t bring my camera, I don’t notice things as small as butterflies. (Okay, I would have noticed those fawns! And probably the great blue heron, too.) I would have marveled at the osprey and then kept walking. But wanting to get pictures made me really look, really notice.

Last year, I got a better camera, with a stronger zoom, and my pictures got dramatically better. Even before that, I noticed that little flowers by the path have a whole new look when you zoom in. Butterflies are just a speck until you zoom in and notice their beauty. And it might take some waiting before they light up for you.

Isn’t that like people? I was reminded of Pastor Tom Berlin’s sermon months ago, where he talked about using Mr. Rogers as an example of paying attention to people.

If I can zoom in and focus on people, it’s so much easier to notice their beauty.

As a kind of icing on the cake, the next morning I worked the late shift and got another walk in, and got to see yet another species, a great egret. 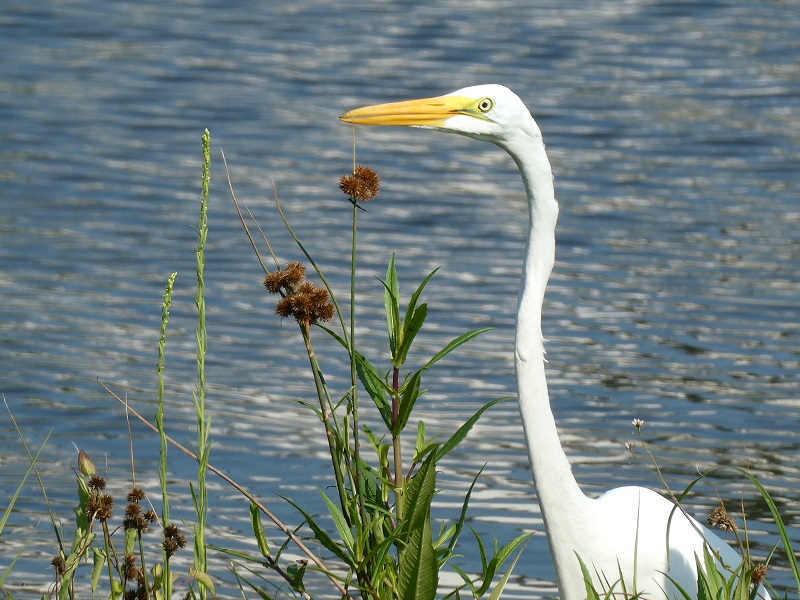 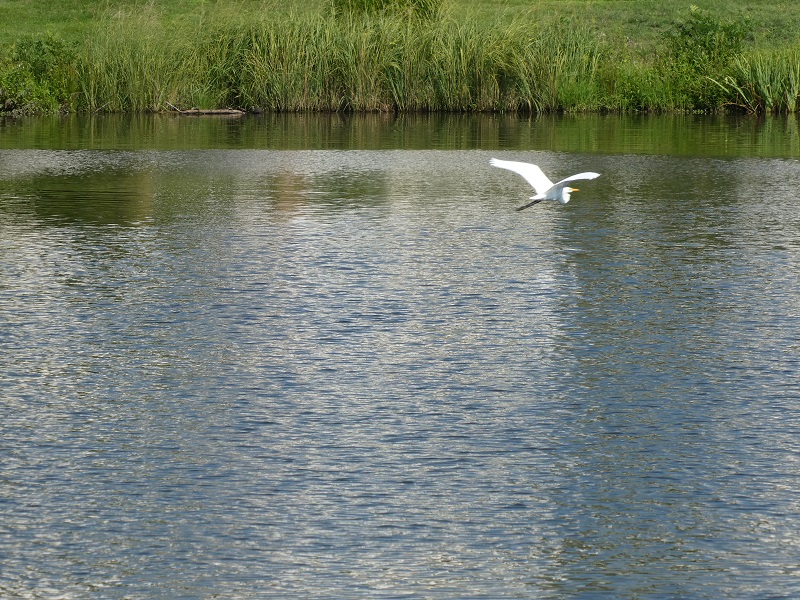 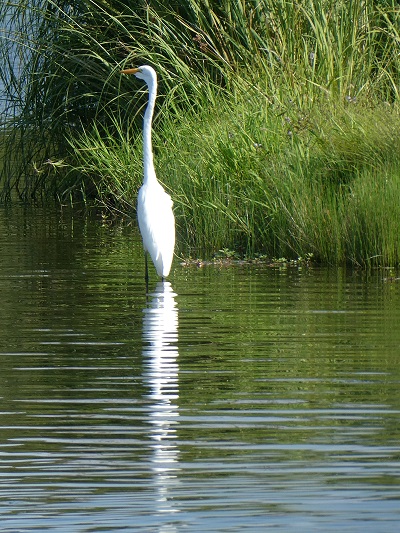 Now, my lofty goal was to start zooming in on people and noticing the beauty of their souls. So far at the library, I confess that most of the zooming in I’m doing is on Nosers who aren’t wearing their masks properly.

But I’m writing this whole post as a reminder to Notice.

When I Notice God’s gifts, I end up feeling overwhelmed with blessings.

And how amazing that Jesus notices me. And I’m going to say He noticed that some blessings would lift my spirits right about now.

And maybe I can pass that on and practice noticing others.