I was born in Washington, DC. However, my parents moved back to their roots when I was only a year old, and the first place I remember living was Kent, Washington, outside Seattle. We moved away when I wasn’t quite six years old, so I have a lot of memories that I know were when I was really young, simply because we were living in Washington.

I suspect that living in Washington is where I learned to love GREEN. And oceans and boats (or at least ferries) and rivers and trees and fall color and snow and mountains. When we lived in Washington, we often drove down to visit my grandparents in Salem, Oregon.

Now, more than forty years later, I’m staying with my Aunt Susie in that same home in Salem, Oregon, and today we drove into Washington State.

First, I should mention that yesterday, I got to visit Powell’s City of Books in Portland, and got to spend time with my older son, Josh, who recently moved to Portland. We went out to eat afterward at the wonderful Mamma Mia’s Restaurant. It was food for my soul to have time with both my boys. Here they are at the restaurant: 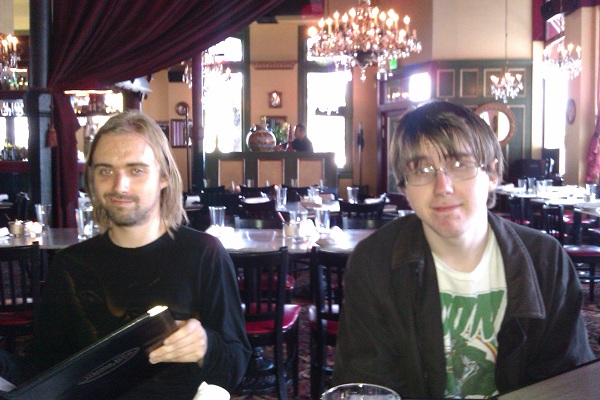 Now, Tim (the one on the right) is about to be a Senior in high school, so he’s looking into colleges. Once Josh moved to Portland, he thought maybe he should check schools in this area. Well, Josh found a school that sounds very distinctive — The Evergreen State College in Olympia, Washington. They don’t give grades, but instead offer narrative reports, and they also let students design their own majors — which sounds very good for undecided students like my son.

So, we decided to spend the day today driving up to Olympia and back. The excuse was to visit the college and talk with an admissions representative. But a big part of my reason is that I love Washington State and wanted to spend part of my vacation there.

A cool thing is that there was one part of the trip — the same one my parents took many times between Salem and Seattle — that I am absolutely sure I remember from more than 40 years ago. It’s the bridges. The big green bridges. And when you’re going back to Salem, there are several small bridges, but then the great big bridge is the last one, and it means you are now in Oregon, and we’re almost there. (Or at least a lot closer.) I started singing “Over the River and Through the Woods, To Grandmother’s House We Go,” and I actually got a flashback from when I had just learned that song — in KINDERGARTEN! — and was singing it as we went to Grandma’s house in Salem. It blew me away, just the sheer amount of time that passed, and then the memory just burst to the surface. I also hadn’t thought I’d remember anything about the trip — and then I saw those bridges, and so much came back!

I enjoyed the school visit, and they were very friendly and helpful. Unfortunately, Tim lost a screw in his glasses and a lens popped out, so he was alternating between looking out of one eye or not being able to see, poor kid! (On the way back, we had my aunt’s GPS lead us to a LensCrafters right off the freeway, and they fixed it for free.) But I think he got some idea of what the place looked like!

One thing I really enjoyed was walking down a little trail right on campus and being plunged into an old forest, covered with moss. We even saw a deer on campus, behind a building! 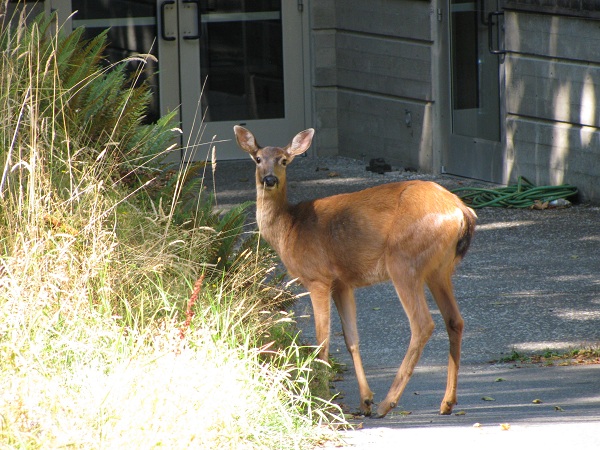 I could not possibly walk in a forest without taking pictures, so here are several: 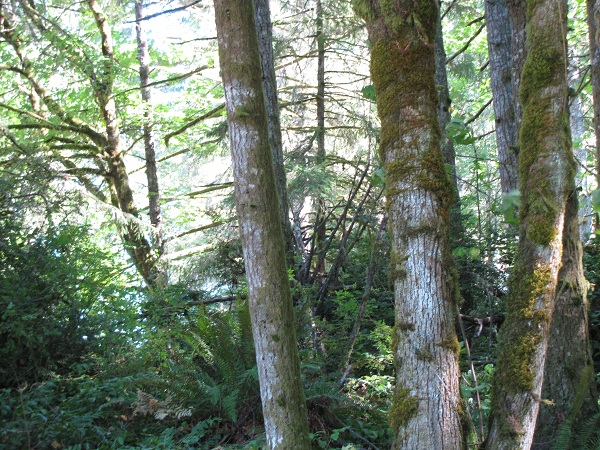 Of course, you have to imagine these trees completely surrounding us… 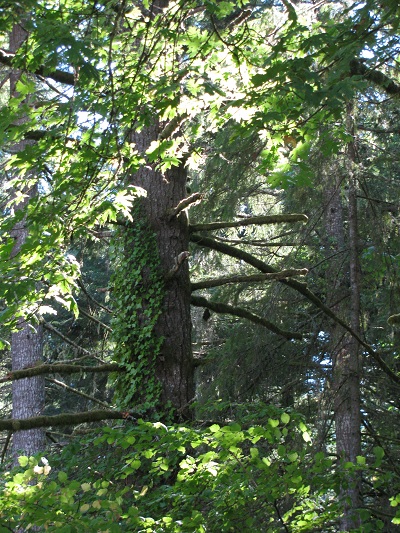 And you have to remember that the weather was absolutely perfect, sunny but slightly cool… 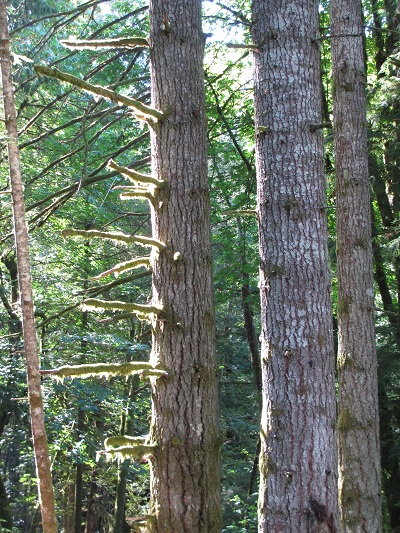 And the moss on all the tree branches gave it such a mystical feeling, reminding me, again, of the childhood experience of walking in a redwood forest and taking home a piece of wood with moss on it… 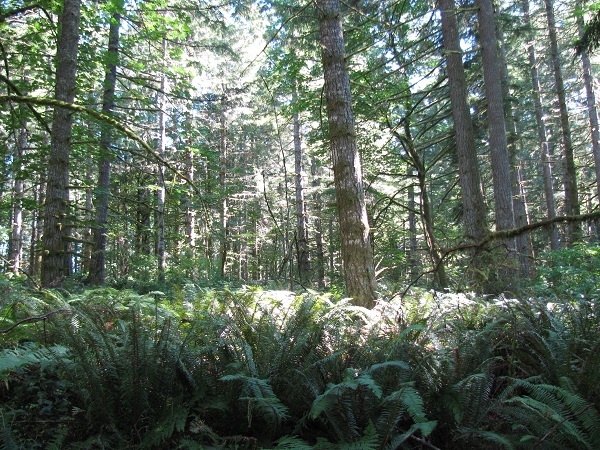 And being in this forest felt so RIGHT… 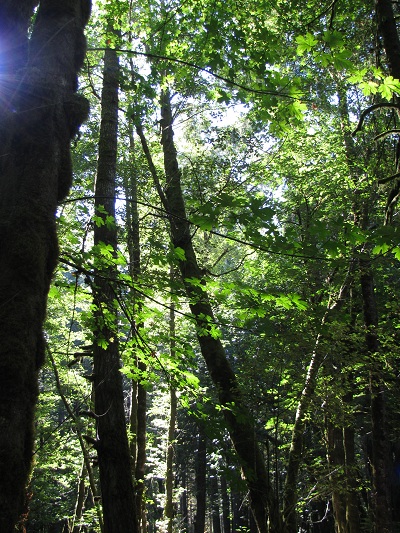 And I found myself thinking, “Now THIS is what a forest should be!”… 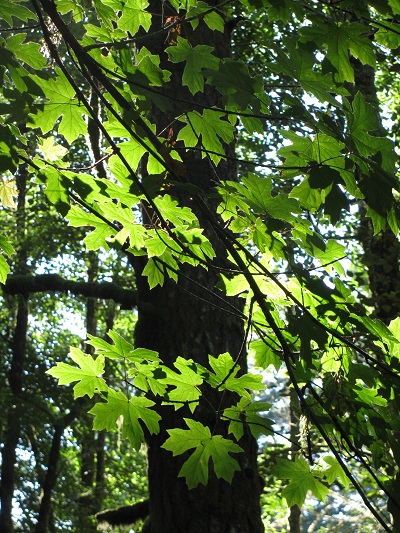 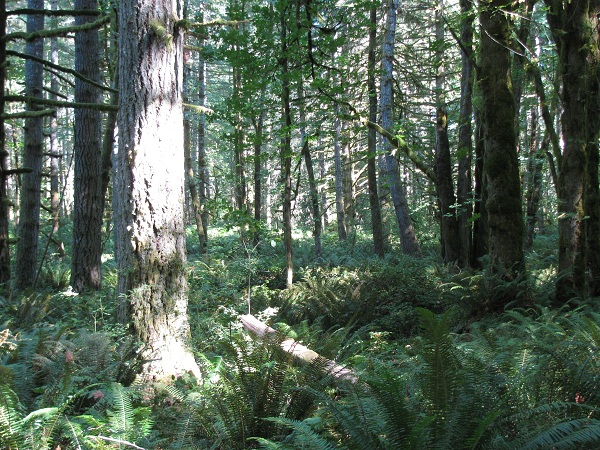 And it simply did my soul good to be in such a forest again! 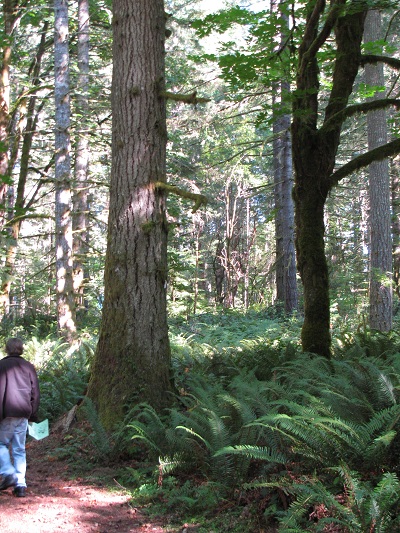 …And would you look at the sheer size of those ferns!

I did surprisingly well at Evergreen. We didn’t do a lot of walking — just the little hike — and I never did get fuzzy-headed. I got a little bit tired driving up, but we made quite a few stops on the way back, so I didn’t have any real trouble.

Oh, and one of the best things about the day was that my son read me stories from The Chronicles of Harris Burdick! We got through seven stories, which is half the book. They are written by a wide variety of authors, and all have something strange about them (as fits the pictures), and it was a wonderful way to spend the time, as we passed through gorgeous countryside.

So, it was a simply lovely day. Absolutely perfect weather, a trip through beautiful countryside, plenty of nostalgia, time with my son, a short hike in a forest, and a good book read to me by someone I love. Wow!