Two weeks ago, on my 52nd birthday, I decided to start Project 52: Each week for 52 weeks, I’m going to post a reflection on one year of my life.

It’s fun for me, because though as we live life, the years get shorter (since we have only our own life to compare time with) — it will be fun to lay it all out with each year getting equal time.

Now, I’m guessing as to when these pictures were taken. The date may be on them — but I copied them years ago and don’t have the originals. When I visit my parents in a month, I hope to find some more pictures. But I will choose the ones that look about right for that year. 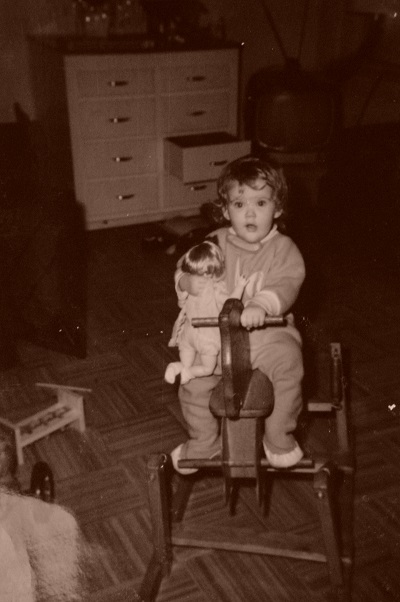 (This picture confirms my belief that I always loved dollies (and babies)! Though perhaps I didn’t always take the best care of them.)

That was the year we moved from the house in Seattle to the house in Kent — the first place I remember living. I have no way of dating most of those memories, so I can assume most of them were from a bit later.

But I swear I have a memory of the house in Seattle. What I remember matches what has been said about it. My Dad says they moved out of that house around June 1966 — before my brother Ricky started Kindergarten in September in Kent. (Ricky was going to be 5 years old in October, and they got him in early, because he could already read.)

Anyway, in my memory we were in front of a house with lots and lots of steps. We were moving away, but I went back inside to use the potty. (If I was actually being potty trained, I’m sure such a thing would have happened as the last thing before we left!) I remember all the rooms being empty and it all being very strange to me and being hurried in and out of the house and carried out to the car.

It may not be true — but I suspect it is. I don’t remember any sadness about moving, just some bewilderment and Mommy making it all seem rather momentous. There was no fear or wondering about the future. It’s a very living-in-the-moment memory. But I pieced together down the road that I really did have a memory of “the house in Seattle with lots of stairs.” 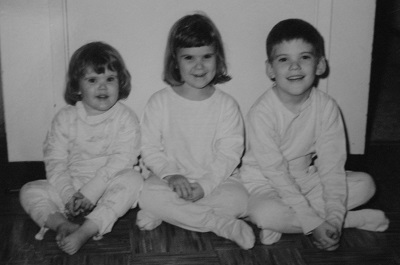 This picture is possibly from later, but that year I was two, Becky was three, and Ricky was four, going on five.

The house in Kent was also the first address I memorized (much later) — “one-one-three-one Seattle Street in Kent.” I believe the strong emphasis on in Kent was to clear up any confusion about living on Seattle Street.

It was a two-story house with a basement as well. Becky and I shared a big room upstairs. We had matching white dressers and bookcases and desks. (And you know what? I still have one of the bookcases!) Our bedroom window looked down into the side yard.

We had a big picture window in the living room, that reportedly had a view. I don’t remember much about that. Maybe because I was too short to enjoy it? There was a yellow kitchen. In the basement there was a ping-pong table where once or twice I saw my Mom and Dad play ping-pong. (Wow. That’s an old memory. I don’t think my Mom played ping-pong any in later years.)

We had an enormous (to me) green lawn in the front, a garage in the back with an attic, and a fenced yard in the back as well. Seattle Street came up a hill and around a bend right in front of our house (which is why we had a view). There was an alley in front of our front yard and blackberry bushes across the alley. If I ever went near the blackberry bushes (in later years), I got scratched to pieces by the thorns.

And now I’m definitely getting into later memories. Next year: My sister Wendy is born! My years as the spoiled youngest child (Yeah right, Rick!) were coming to an end.