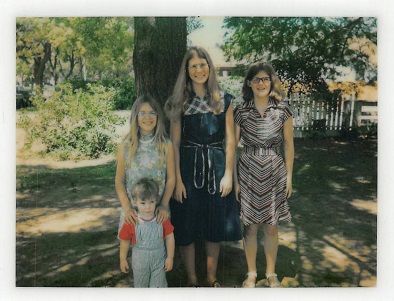 July 1977 was when we finally got a baby SISTER! I had been spending the night at my friend Jennifer’s house when I got the news that Mom had finally had ABBY! I will always remember the year Abby was born, because she was almost born on 7/7/77 — but not quite. (And Horse #7 won the 7th race at Hollywood Park on 7/7/77, by the way.)

Anyway, at the sleepover at Jennifer’s house, they threw me a surprise birthday party. I’m pretty sure Ruth and Susan were also there. It was a couple weeks after my birthday, so I was indeed surprised! It was very sweet of my friends.

Here’s our family going on a hike in Angeles National Forest when Abby was young (probably that Fall). 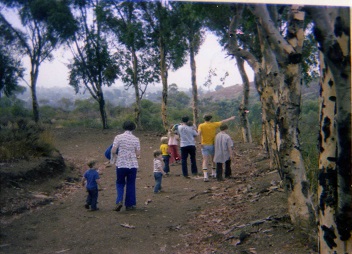 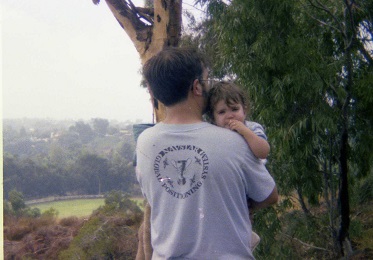 I don’t think I’ve mentioned yet that we spent most of our summers in the pool! 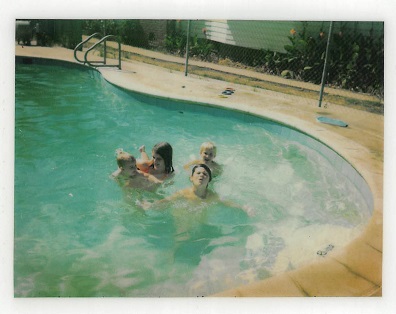 And that reminds me that Summer 1978 was when I got the worst sunburn of my life. For that matter, it’s the worst sunburn I’ve ever heard of anyone having — though feel free to tell me about worse ones in the comments!

I think it was toward the start of the summer. I had recently gotten a brand new bathing suit. Before that, I’d been wearing my P.E. uniform — shorts and a shirt with sleeves — to go swimming. So the skin on my shoulders hadn’t seen any sun in a long, long time.

Aunt Susie was living with us then, and she took some of us kids to the beach! Yay! I wore my brand new swimsuit. We were there from 10:00 to 2:00. It was overcast. I spent a lot of time in the water, but did some lying in the sun. This was just *before* sunscreens with SPF 15 or 30 were developed. I did put on sunscreen, something like SPF 3. And I went in the water and it must have washed off. And my skin had not seen the sun….

The thing about me is that sunburns don’t show up for a few hours. If it starts to show up while I’m still at the beach, I’m in trouble. This did.

I was in bad shape. That night, I got up to use the bathroom, going down the stairs and through the house — and started to black out on the way back to my room. I had to lie down for awhile on the couch before I could make it back to my room.

The blisters developed pretty quickly — everywhere, but especially on my shoulders. They lasted a full week. I slept in my bean bag chair the first few nights because I couldn’t put my arms down — it stretched the skin too much. It was summer, but I cancelled my flute lesson because I couldn’t move and stayed in bed (or on the bean bag chair) for most of the week.

I’m rather appalled at this point that my parents didn’t take me to a doctor. But to be fair, I probably didn’t even tell my Mom about the fainting episode in the night. And it was just a sunburn, right?

Now, I later had some more second-degree sunburns in my life — but for those the first blisters only lasted a few days. This one was especially bad in that the first round of blisters did last a full week. In fact, the initial sunburn happened on a Saturday. The following Saturday, I was invited to a skating party. By that time I was moving around, but blisters on both my shoulders had merged into one giant blister. So I had big yellow bubbles the size of a 50-cent piece on each shoulder. Well, I fell down some skating and the blisters popped and left yellow fluid on my clothes. (Gross enough for you yet?)

It was the day *after* that when that first layer finally peeled. Then the second layer *also* formed blisters — but those were the little white blisters, much smaller and much much less painful. But rather significant that both layers of skin blistered.

And that is why the thought of skin cancer frightens me. (I’m getting a small mole looked at this week, in fact.)

So that was my summer! I was still taking flute lessons with Bev Matsumura, and still in Band with Mr. Engel in 9th grade.

I was still ahead a year in Math, and 9th grade was Geometry with the exuberant Miss Royer. Ruth and Penny and I sat in the back and were allowed to work at our own pace. Miss Royer let us talk among ourselves — so we could help each other with the math. I will confess — that is *not* what we usually talked about!

Oh, and come to think of it, my Freshman year was the first year I was on the Math Team, in the slot especially for a Freshman. And I won a prize, in competing with other schools! Yes, Math was pretty much my favorite subject already.

Oh, and Freshman year I began being a Stats Girl for Basketball — you got to sit at the referee’s table and record who made baskets and keep the official score. I did it for the Freshman team. We’d usually go to eat during the JV game and then watch the Varsity game. It was so much fun to stay after school and go to the games or, best of all, get to ride on the bus to away games with the team.

The most memorable game was the one against Ontario Christian. It was pouring rain. After our game, we walked to a pizza place through the rain. The streets were pretty flooded, too. Well, as we were walking along, we came to a place where the sidewalk ended. There were some construction signs up, but it looked like there was just a bit of water covering where the sidewalk had been. There was still a narrow curb, but the street was really flooded on the other side of the curb, so we weren’t just going to walk in the street.

The person leading the way hesitated when the sidewalk ended. I was a little behind and wondered what he was waiting for. Then Mr. Halberg, the coach, got impatient and pushed ahead of Karl, who was in the front. Mr. Halberg stepped in the puddle where the sidewalk ended — and disappeared!

You see, it wasn’t actually a puddle. It was actually a Very Deep Pit!

Now, Mr. Halberg popped up quickly and swam to the other side. In fact, he acted so quickly, I illogically thought he knew what he was doing and was annoyed with him for not telling me it was a Very Deep Pit — Another few moments and I would have pushed ahead and gone that way.

Mr. Halberg lost a shoe in the pit and threw his other in. So he spent the rest of the evening wet and barefoot! And I learned to never assume you know how deep standing water is!

9th grade was also memorable because the last day of school was on my birthday! And my friends threw me another Surprise Party. Since that was when I turned 14, I’ll post pictures of that party next week. But I brought my camera to school the last few days of 9th grade, and I’ll post some of those pictures here.

This one’s from P.E. class on one of the last days of school when we didn’t dress out. All high school grades were in P.E. together. This includes my friend Debbie and my sister Becky being silly: 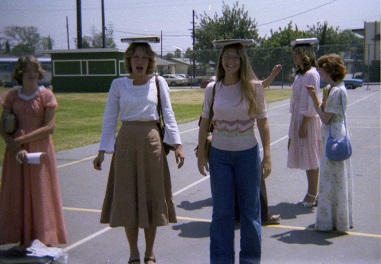 Then Ruth and I thought it would be fun to get pictures with her arm around various guys. Mark Arnold doesn’t seem to mind! And there’s Darlene walking by: 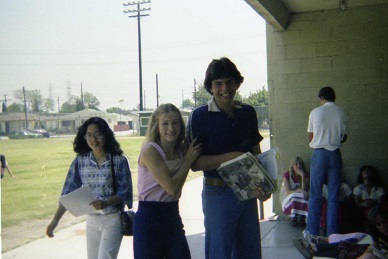 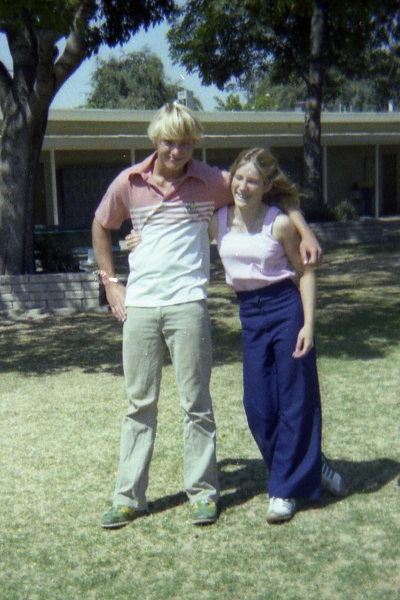 And here’s Ruth in a tree: 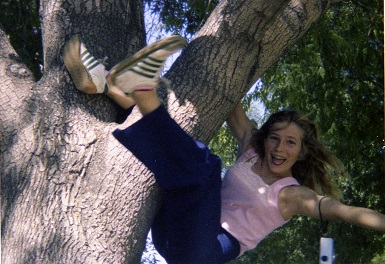 The next day I got in on the action. Here we are with Harold Lind, who was my brother’s friend and a quick-fingered clarinetist in the band with us: 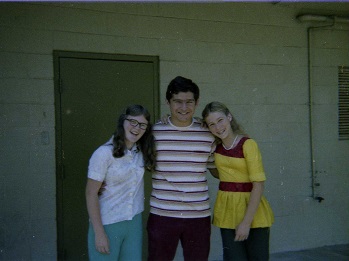 And here’s Ruth with our friend Paula Christie. Paula was in the band with us, playing the saxophone, but she only went to Brethren High School that one year. But we enjoyed her very much that year. 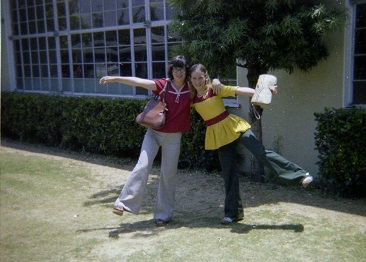 And this picture reminds me that 9th grade was the year we started taking Dan Deguisne to school. He lived near us in Wilmington. This continued throughout high school until our Senior year, when Dan did the driving. Here’s Dan getting in the van on the morning of the last day of school: 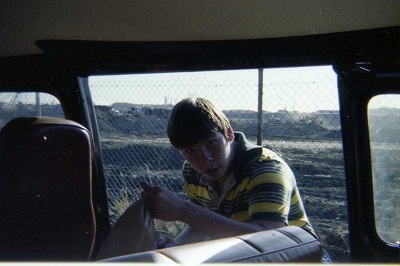 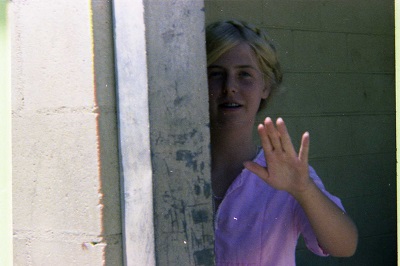 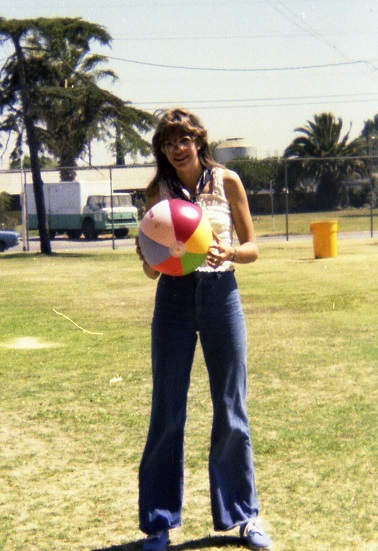 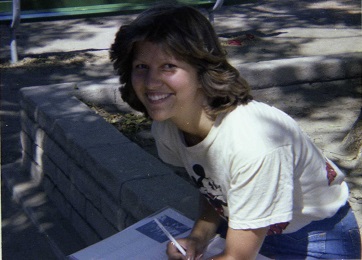 Oh! And Freshman year, I was in the *high school* 5-in-a-row tournament. (And the hex tournament. And the 3D tic-tac-toe tournament.) That meant I had to beat my brother Rick in order to win. I did, which was a very big deal to me. (I didn’t win the other two games, but I was on the 2nd year of 5 years in a row of winning at 5-in-a-row.)

So yes, that was 9th grade. Since it was the same school as we’d attended in junior high, I was already established with friends. There was new freedom, going to basketball games, and I remember it as a good year.