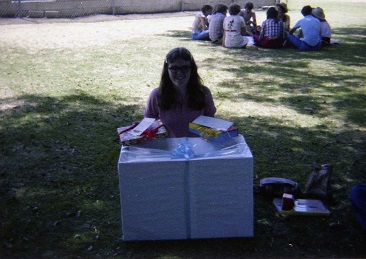 As everyone in my family knows, the year your age is the same as the day of the month you were born is your “Lucky Birthday.” So my Lucky Birthday happened on June 14, 1978 — which was the last day of school for my 9th grade year.

And my wonderful friends, Ruth, Jennifer, and Susan, threw me a surprise party at lunchtime! Here’s what I saw when I came to eat with them. I’d brought my camera for the last day of school — I was still unaware of what was up when I took this picture. 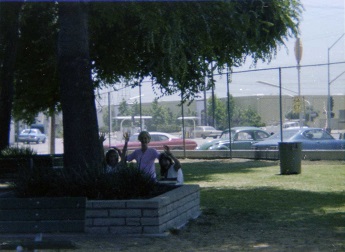 They gave me presents 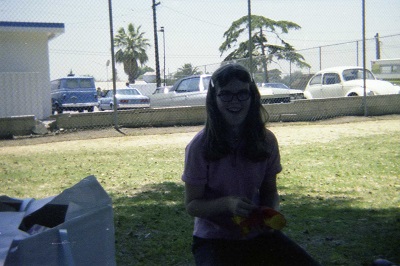 And had a very creative solution to lighting candles not being allowed: 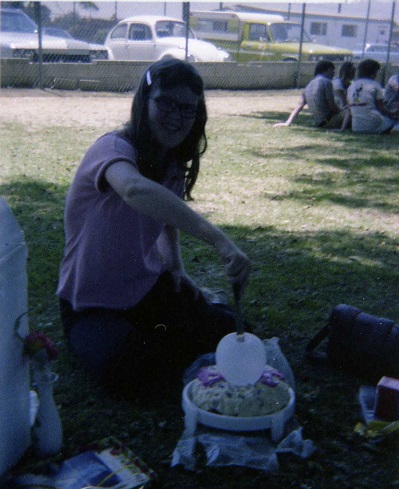 So that was the way 9th grade ended. Something I remember about that summer was that at the beginning of summer, we switched churches. We’d been going to University Bible Church for years, but it was far away and gas prices were high and there were fewer and fewer kids our age. So we began going to Lakewood First Baptist Church, which had a large, active youth group.

The first event we went to at Lakewood First Baptist was a skating party. I remember I was wearing the “Jesus is Lord” t-shirt that Jennifer gave me for my birthday (at the party). I thought it was kind of funny that Matt Boone started witnessing to me — even though my t-shirt said “Jesus is Lord.” That’s the kind of group it was.

And besides sharing your faith, they did encourage everyone to have daily quiet times. Now, I already had that habit, but sometime in there I stopped using “The Bible Fellowship” — a by-mail devotional system and began just writing out daily observations. On top of spending an hour a day memorizing Scripture.

Seriously, it was good to read how faithful God was to 14-year-old Sondy.

A little less seriously, I’ve been thinking about crushes. I had long-lasting hopeless crushes during high school, and felt silly for that. When I was a teen, those crushes were wrapped up in the questions “Am I lovable?” “Am I attractive?” “Does he like me?”

It’s rather lovely that now, at 52, I know that feeling attracted to the nice men I’m friends with doesn’t have much of anything to do with those questions. Because I know I’m lovable. And doggone it, I’m attractive, too! (At least to people who like somewhat nerdy and very enthusiastic cute little people.)

And a cool thing? I have many men friends these days who honestly do like me. Most of them are married or otherwise unavailable, but it feels good to know that some very fine men honestly like me.

But that’s now. Attraction now is different than it was then. Then — I didn’t know quite what to make of it — but I do remember how thrilled I was on the first day of school when I saw the guy I had a crush on walk into 2nd period Chemistry class.

That year, I was the only 10th grader in Chemistry. Chemistry and Physics were only offered every other year. Since they required Algebra 2, which I was taking a year early, and since I did NOT want to take Biology (When I was in 8th grade the Biology class had dissected a poodle and I decided never to take Biology.), I took Chemistry in 10th grade.

That year I got to know T.G.I.H.A.C.O. (The Guy I Had A Crush On) a little better. I sat in front of him in Chemistry class. My brother Rick sat on the other side of me. Or maybe Rick sat next to T.G.I.H.A.C.O. Anyway, I actually *talked* to him many times that year!

Chemistry class was fun! Mr. Elliott was the young and enthusiastic teacher. His experiments didn’t often work, but he was a great teacher.

All the years I had a crush on TGIHACO (all the years he was at Brethren High School from the first day he walked into math class), I would have been mortified if he knew. I was never under any illusions that he liked me back or would ever ask me out. So now I’m taking a risk! Anyone from high school who reads this — he is identifiable. And he is currently my Facebook friend, all these years later.

So, TGIHACO — if you read this and realize I had a crush on you all those years (You probably knew, actually.) — thank you for not humiliating me about it all those years ago! Please take it as a compliment! And you were always kind to the somewhat starstruck little 10th grader.

I don’t blame the guys of my high school for not taking an interest in me and not asking me out. I was a lot nerdy in those days — and completely enjoyed getting higher grades than the guys in my classes. That was the year I finally got my hair cut at a salon rather than just getting it cut by my Dad. I finally got “feathers.” (This was the 70s!) And I finally figured out that it wasn’t fashionable to wear polyester elastic-waist pants. Sigh.

I continued being a basketball stat girl. But my Sophomore year, I got to take stats for the Varsity team. I’m not sure why. I think when we were signing up, someone or other urged me to do varsity, and the coach was the Algebra 2 teacher, so he let me. That was fine with me, since TGIHACO was on the Varsity team. Yes, I enjoyed watching him play and riding on the bus with the team. I still really enjoyed the feeling of freedom of getting to stay after school and go to all the basketball games.

Tenth grade was the year that I forsook the band and joined the A Capella Choir. My brother Rick and sister Becky were also in the choir. We had an outstanding choir director, Miss Hutton — who had also been the choir director when my Uncle Rich had gone to Brethren High School. I sang second soprano. This meant I finally had more classes with Darlene, since she was in choir. I think Ruth was still in Band, though she joined choir before we graduated. And Jennifer was a second soprano like me.

I loved singing in the choir. We made beautiful music together. We sang in many local churches and went on tour to northern California for ACSI Festival. And being part of a group singing praises in four-part (or 6-part) harmony is a wonderful thing.

Another big thing from that year: 10th grade was the year I beat my brother Rick on the MAA Exam by 1 point. This meant that he did not have the high score in our high school for three years in a row (a silver pin) — but that I eventually did. The MAA Exam was a test sponsored by the Mathematical Association of America. The person with the highest score in the school gets an award. If you win two years in a row, you get a bronze pin. Three years in a row gets a silver pin, and four years would get a gold pin.

It was a big deal to me winning that exam. Even though I knew that one point made it a matter of luck. But I was third in a big family and felt insignificant and unnoticed — and in math, in the shadow of my brother. So it felt significant to actually get a higher score than Rick did. That may have started my steps down the path that led to being a math major.

Oh, and my family… 10th grade was when the 10th kid in the family was born. And there was one Hatch in each of the three upper grades at the high school. We had: 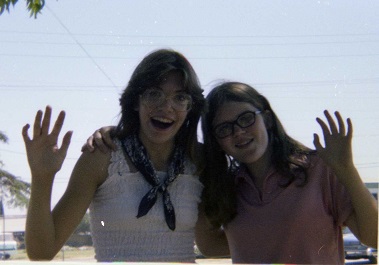 So that was 10th grade, the year I was 14 years old. It also included lots of hanging out with friends, lots of laughter, and an overall great year.