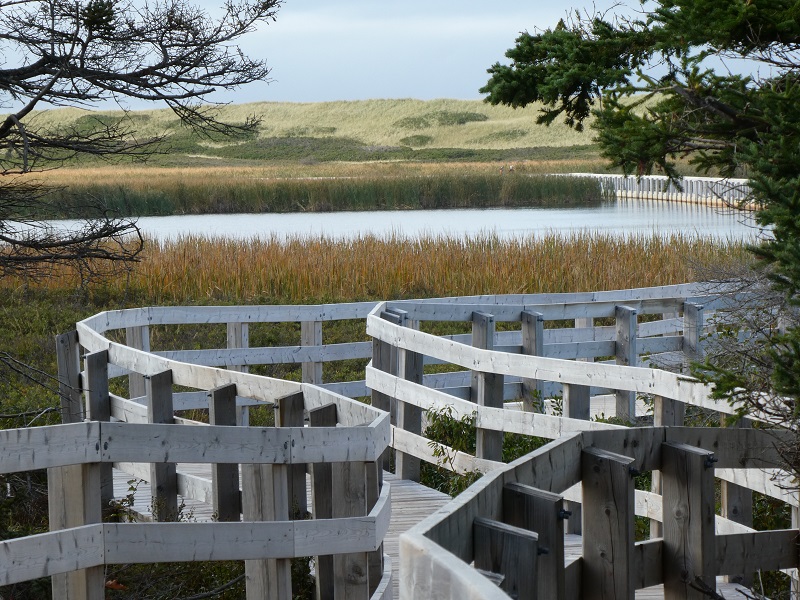 This is the story of my Road Trip Adventure to Prince Edward Island with my friends Darlene and Ruth. We drove up from Virginia to Canada on a late September weekend. On Monday, we visited Green Gables Heritage Place and walked on the trail through the Haunted Wood to Montgomery Park and L. M. Montgomery’s Cavendish home, finishing up with a drive along the shore. On Tuesday, it rained, so we visited museums — first L. M. Montgomery’s Birthplace and then the Green Gables Museum at Silver Bush. That day culminated with a trip to Anne of Green Gables: The Musical.

On Wednesday, we took a scenic route to Greenwich Dunes. As we began the hike, people we passed told us to walk all the way to the beach, because it was “astonishing.” As we came out of the woods, we began to understand what they meant. 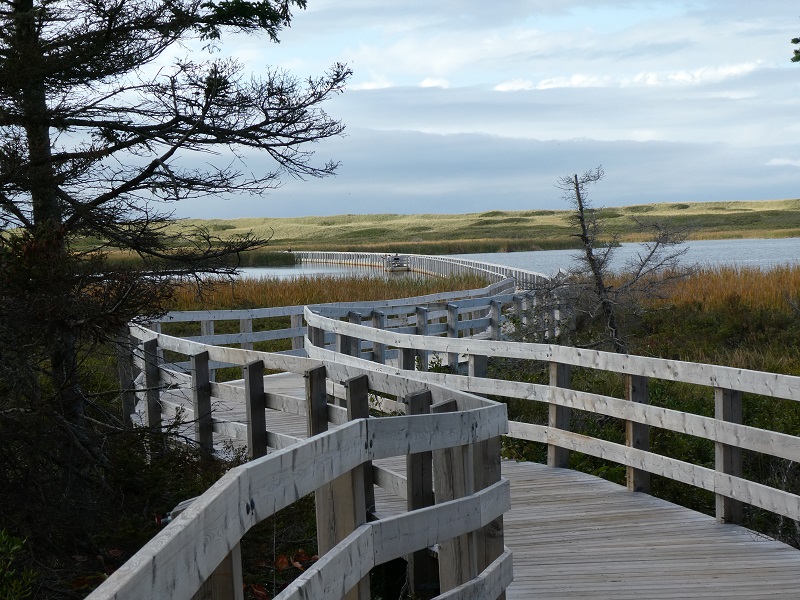 Even in the woods, we’d been walking on a boardwalk, to keep us off the delicate plants of the dunes — before we’d even realized we were already walking on dunes.  But coming out from the trees, the boardwalk continued, becoming a floating boardwalk that took us through a shallow lake. 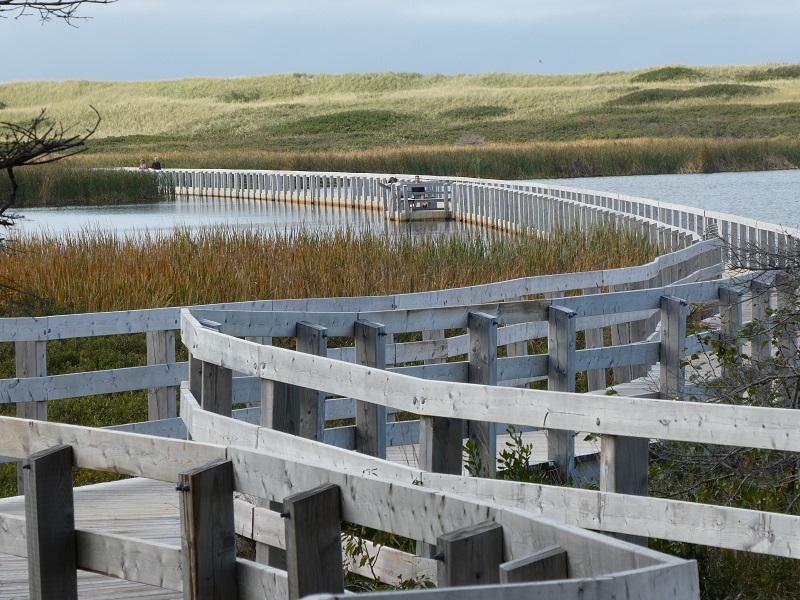 It was already stunningly beautiful.  We emerged into a huge flat area.  A lot of it was covered by water, but also grasses growing in the water.  The area was rimmed by what looked like grassy hills, but we now knew were dunes covered with dune plants. 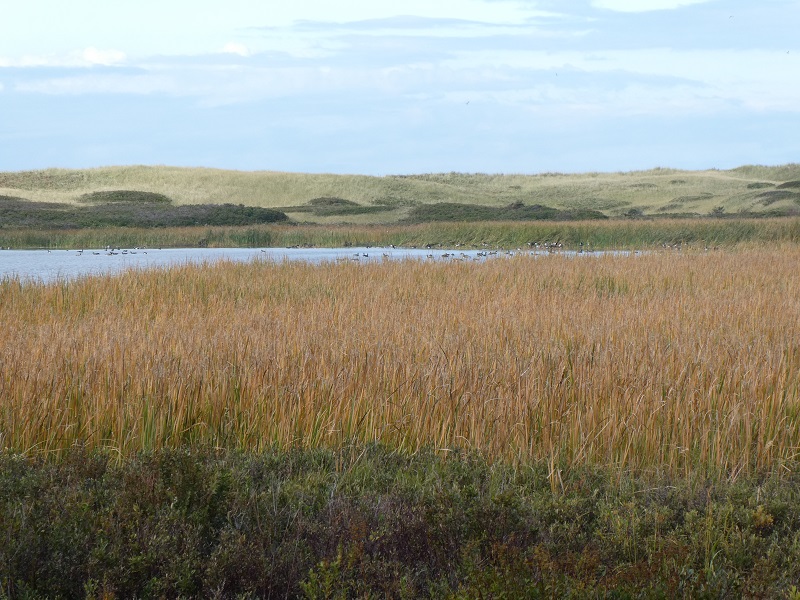 The view was sweeping in every direction.  This was off to our right as we came out of the woods. 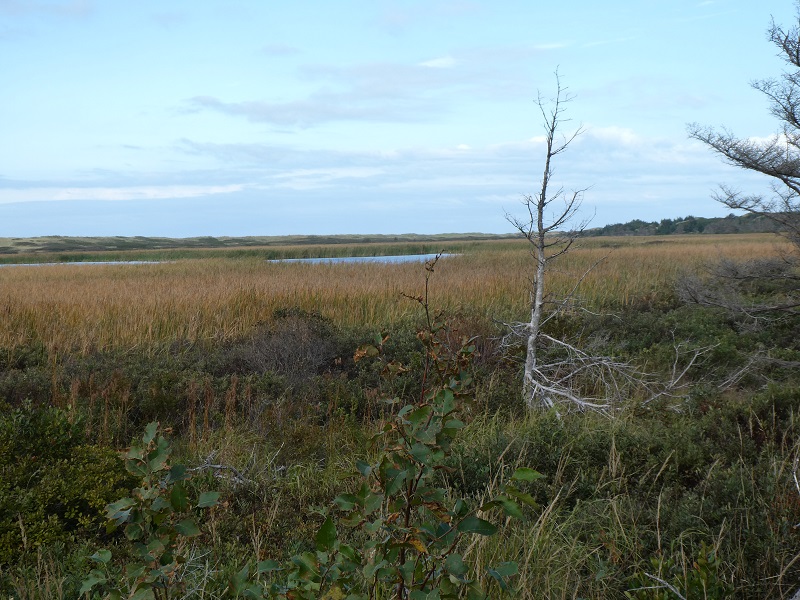 Our path led through the lake. 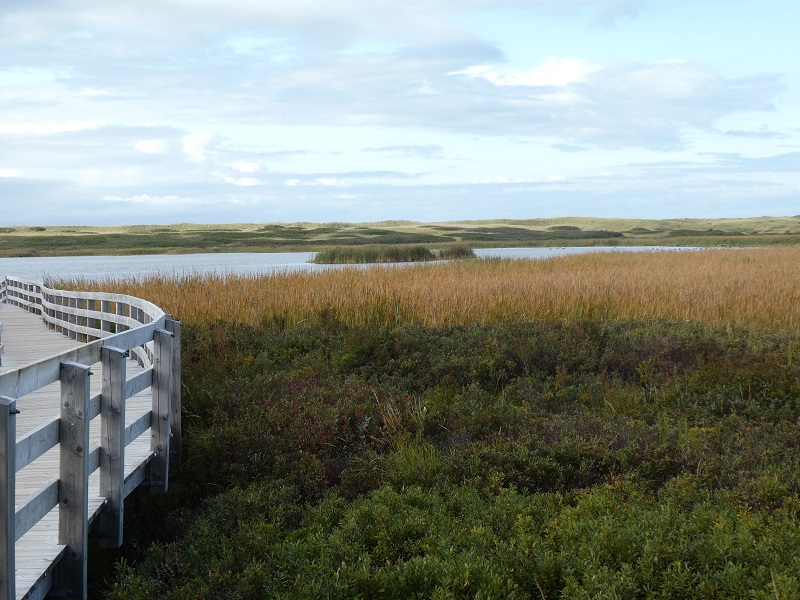 So peaceful and beautiful!  And the air was filled with the sound of birds calling. 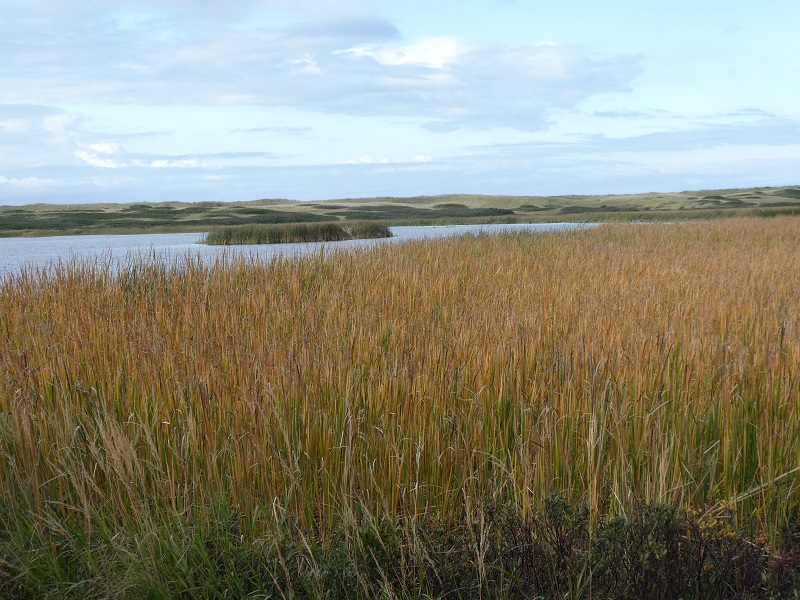 So many water birds!  They were swimming, flying, swooping, calling… 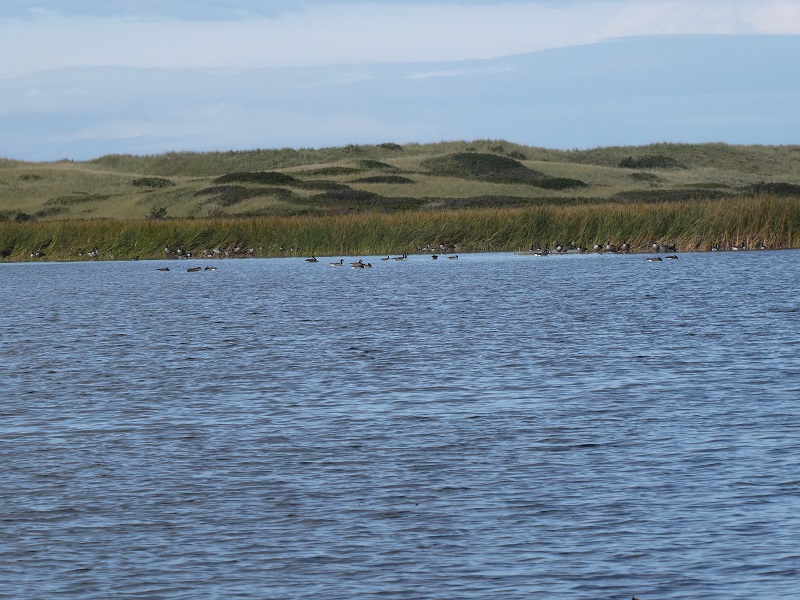 The floating boardwalk was anchored in the ground below the shallow lake, but was obviously made to be able to move with the dunes.  It felt like we were walking on water. 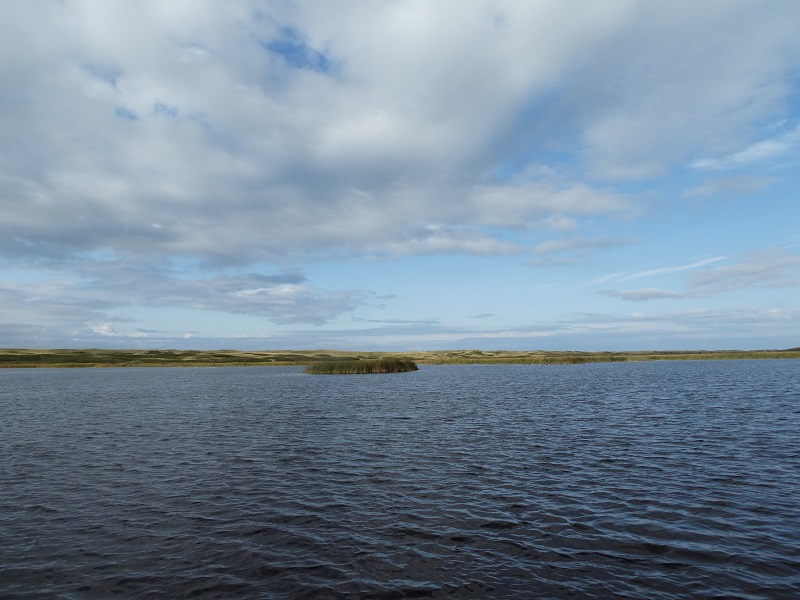 There was even an information stop in the middle of the lake. 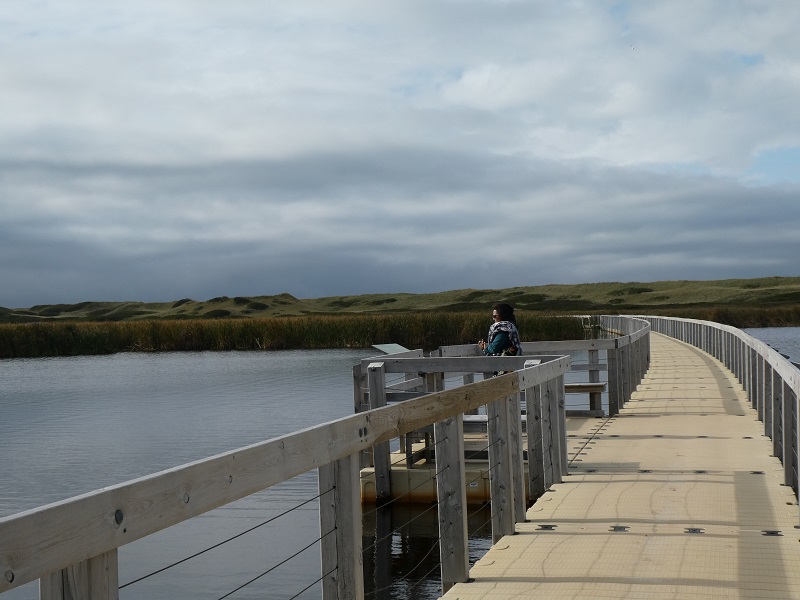 The main text of the sign says:  “Life in the Shallows:  This freshwater pond manages a fragile existence.  It is at risk of being flooded by salt water during the highest tides, it often goes nearly dry during the summer and it is surrounded by migrating dunes.  Bowley Pond and others of its type are an important habitat for many species of plants and animals.  The extensive area of cattails on this side of the boardwalk is an excellent place for American bitterns, red-winged blackbirds, and other birds to live.

“Bowley Pond is shallow, sandy, and becomes very warm in summer.  While these conditions make it difficult for fish to live here, they provide good habitat for plants such as waterwort.” 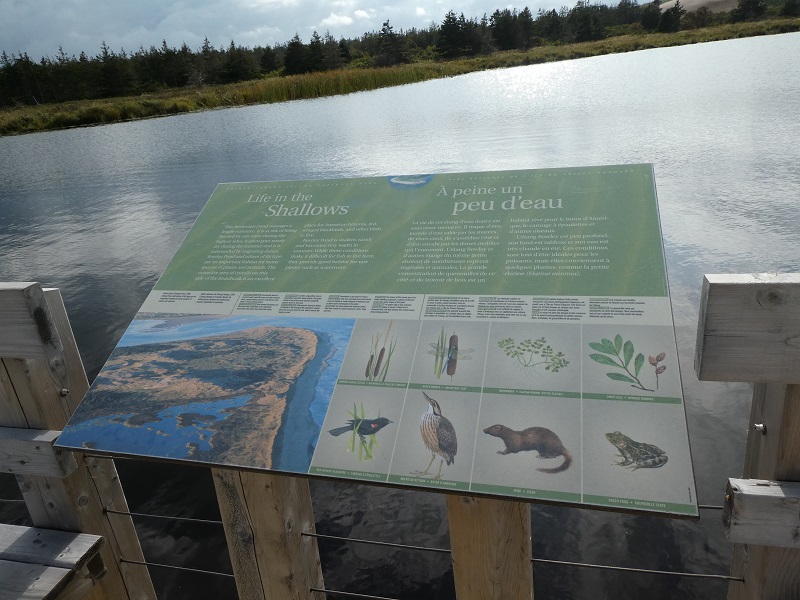 Have I mentioned how beautiful it was? 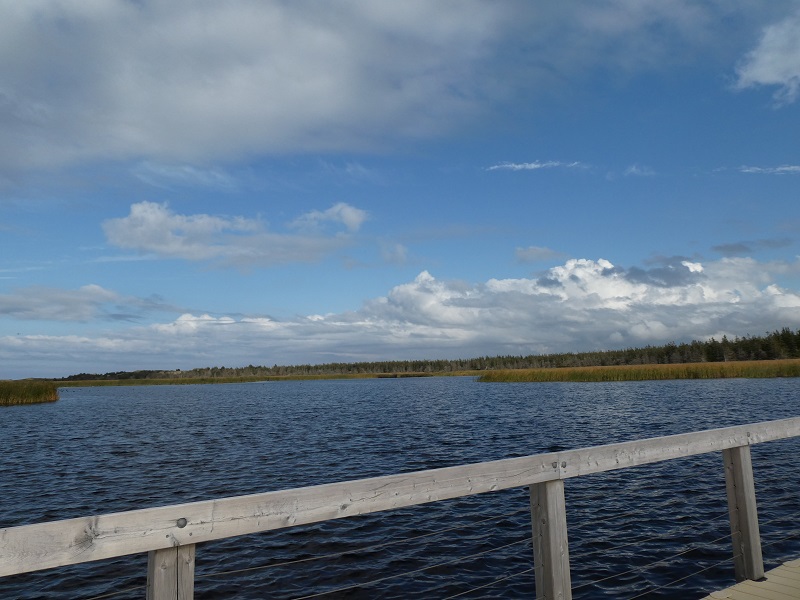 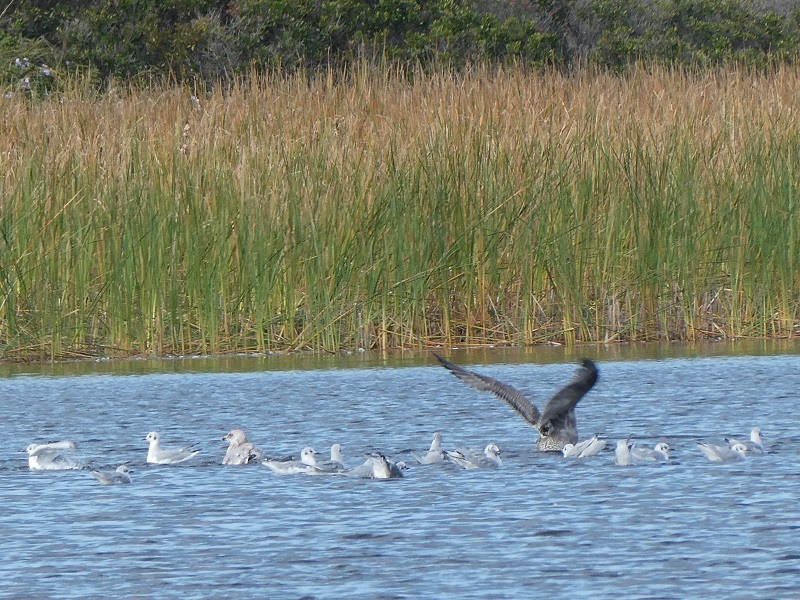 This was using my full zoom, since they were at the far end of the lake, but we did appreciate that there were lots of birds swooping and flying and making bird noises.  (Imagine all these pictures with birds calling.) 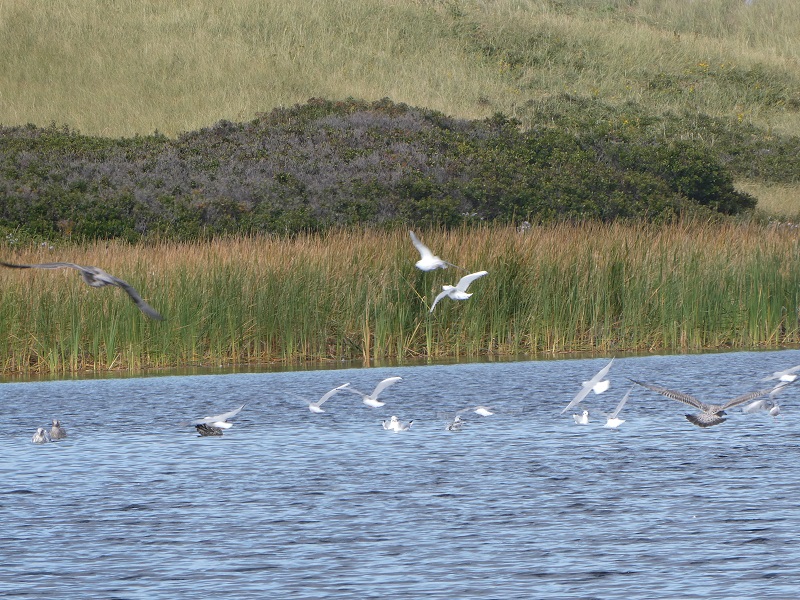 And the boardwalk continued! 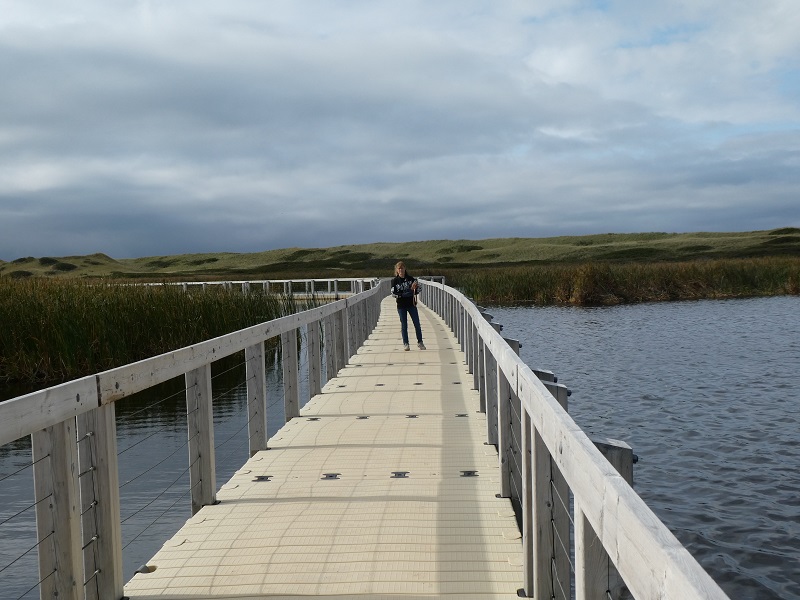 I liked it that the boardwalk didn’t just go straight across the lake.  Now we were curving around some grasses toward the other side. 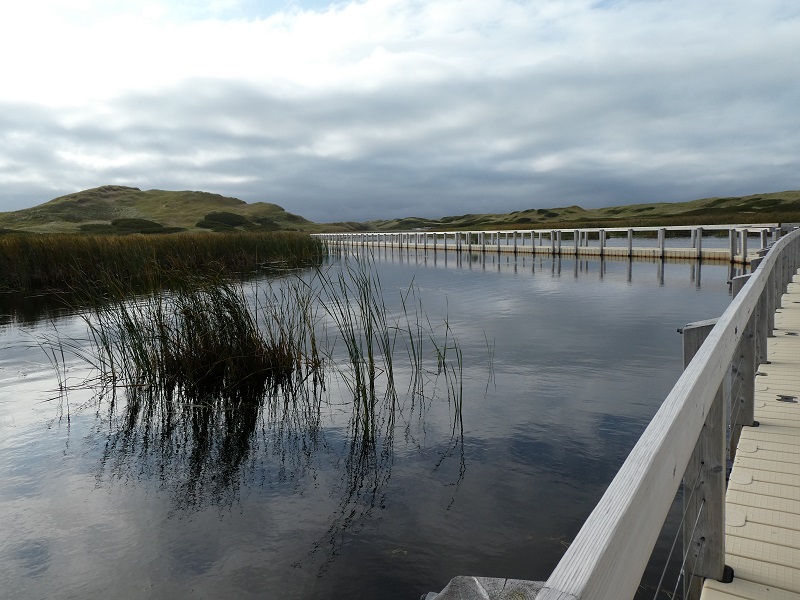 On the other side of Bowley Pond, the path led up and over a dune. 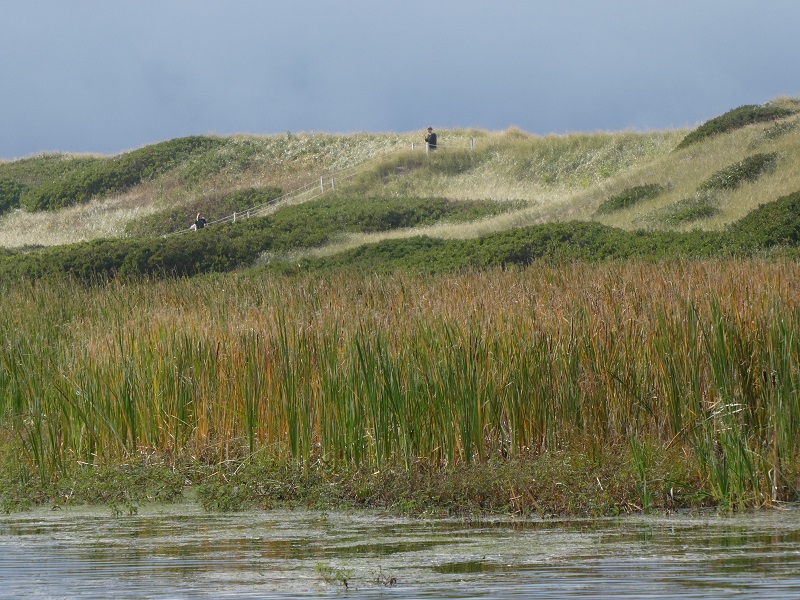 There were some parts of the lake’s rim where the dunes were not covered by plants. 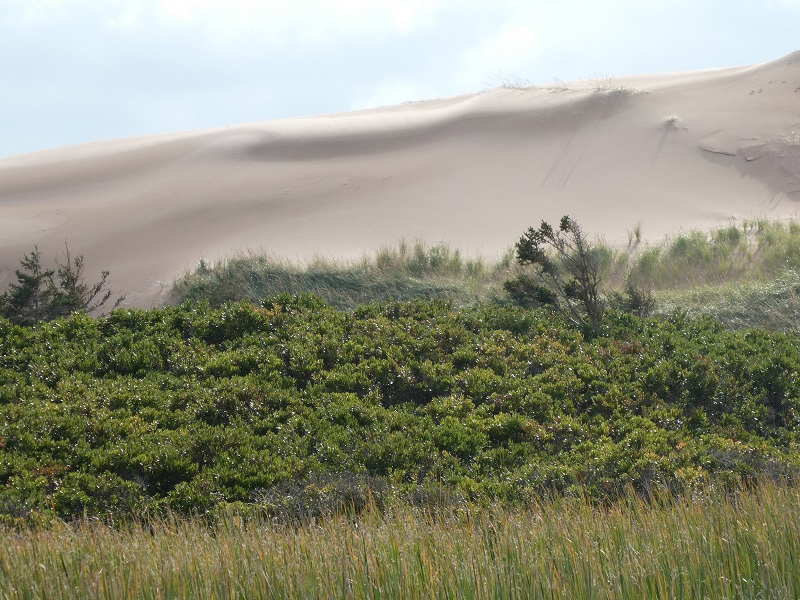 Such an amazing place!  Yes, I’d even call it Astonishing! 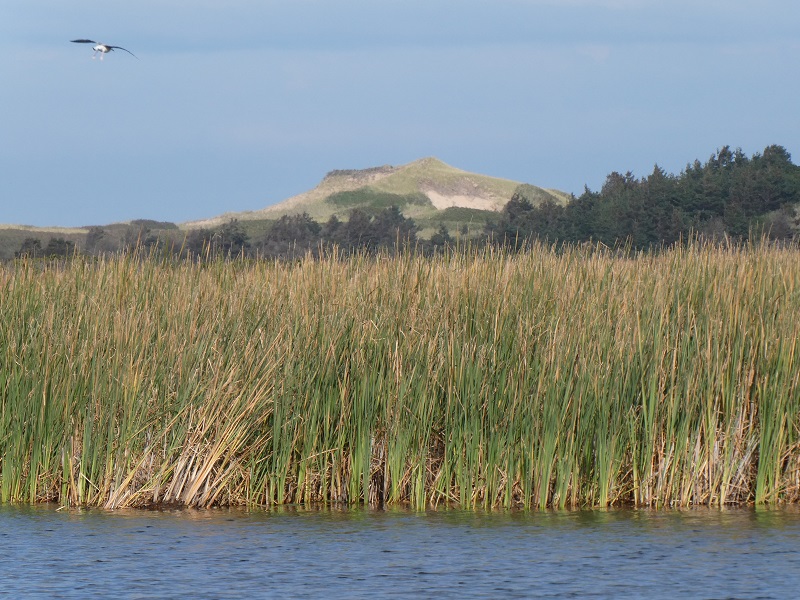 The light and reflections added to the beauty. 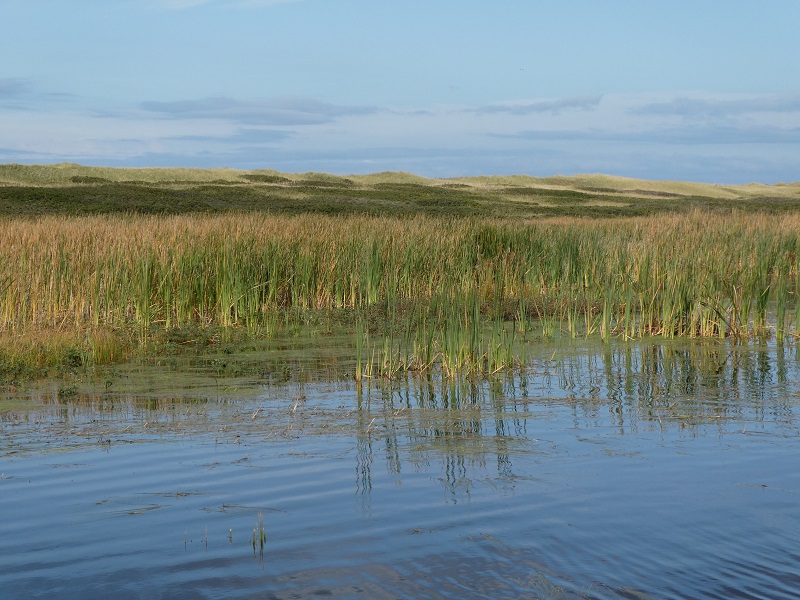 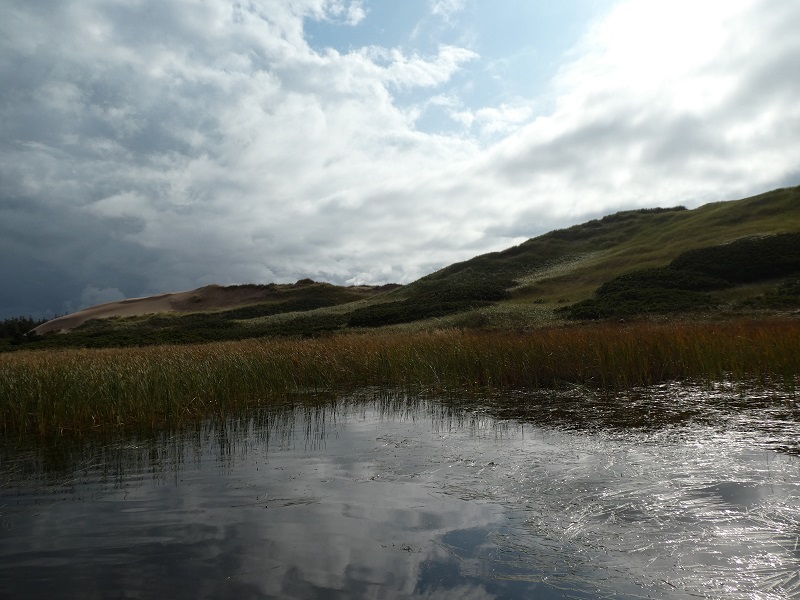 Looking back the way we’d come: 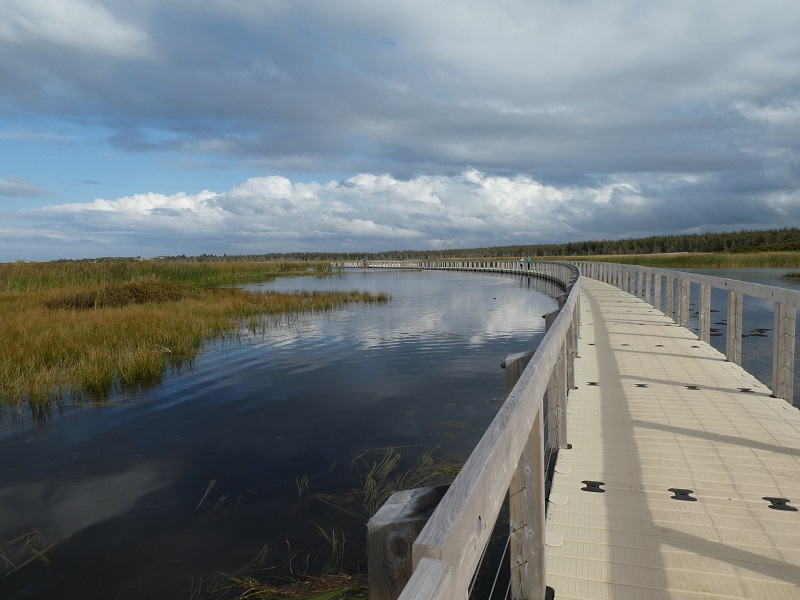 And forward to where we’ll climb the dune: 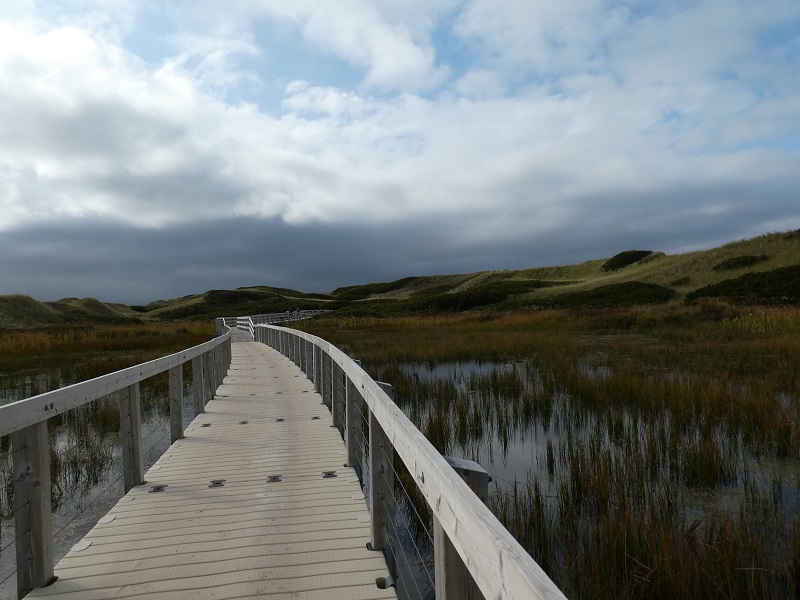 More of those otherworldly dune plants: 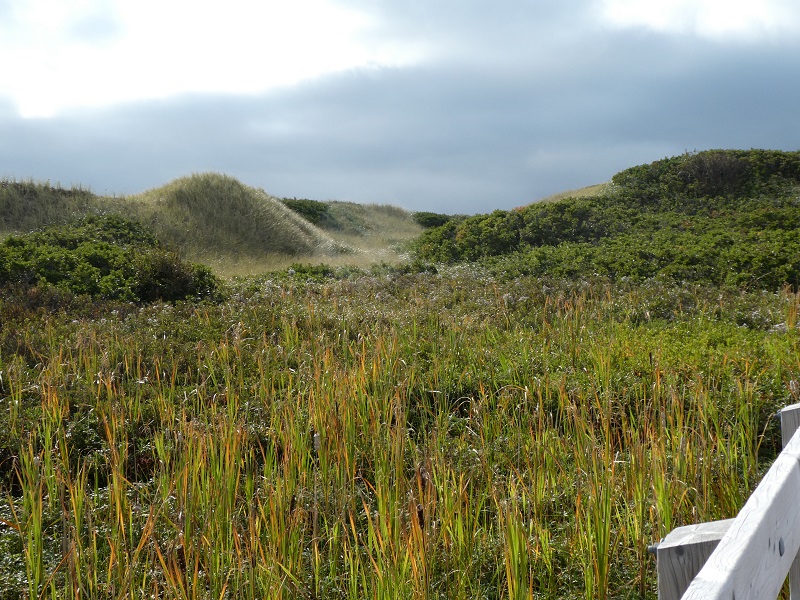 Another informative sign says, “It’s a Tough Life:  Sand dunes are constantly being reshaped by the wind that formed them.  In addition to being a beautiful and ever-changing landscape, dunes are an important and unique habitat for wildlife.

“The anchor that allows this ecosystem to exist is marram grass, a tough grass with special adaptations that allow it to survive in this harsh environment.  It is able to grow up through the sand as it accumulates and spreads mainly by a system of underground runners called rhizomes.  The roots and rhizomes of this plant form a living net, which helps to slow the movement of sand.

“When a dune is stabilized, other species of plants, such as bayberry and wild rose, may begin to grow there.” 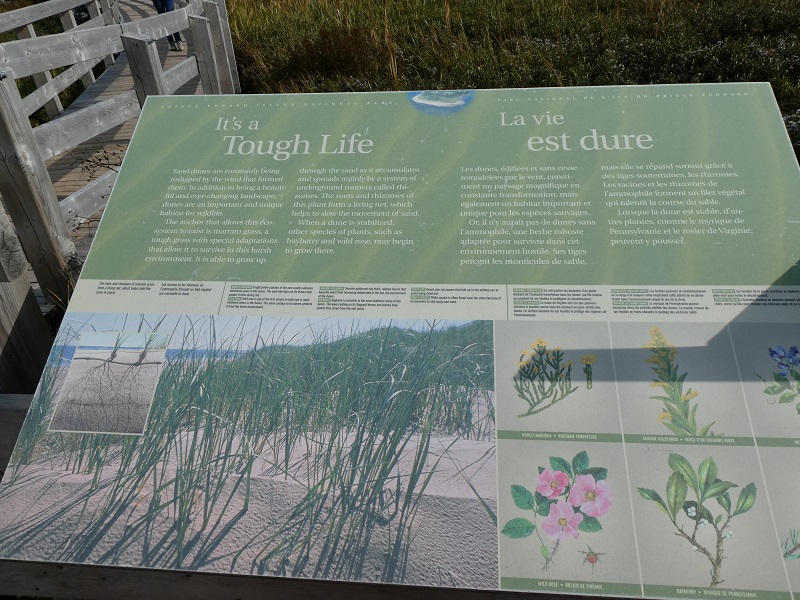 Looking back, we were now across the lake and crossing the dunes. 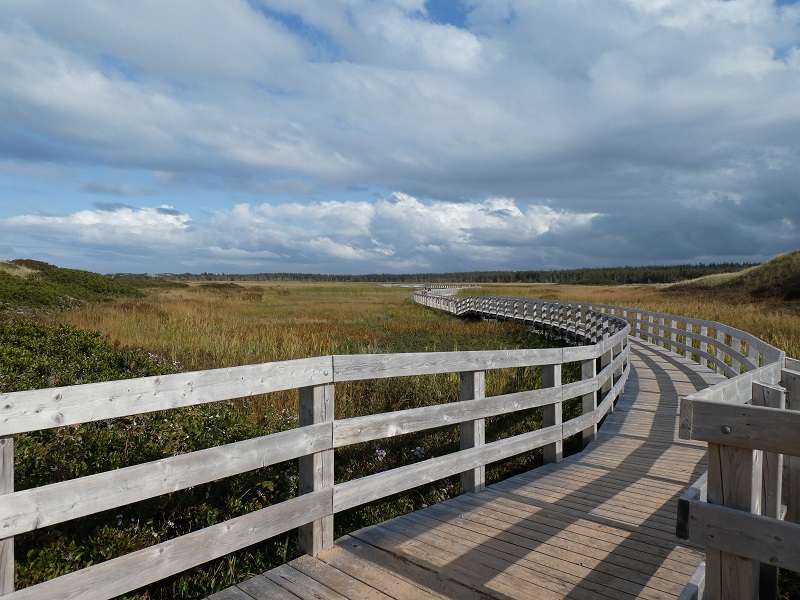 Ready to climb to the other side of the dune: 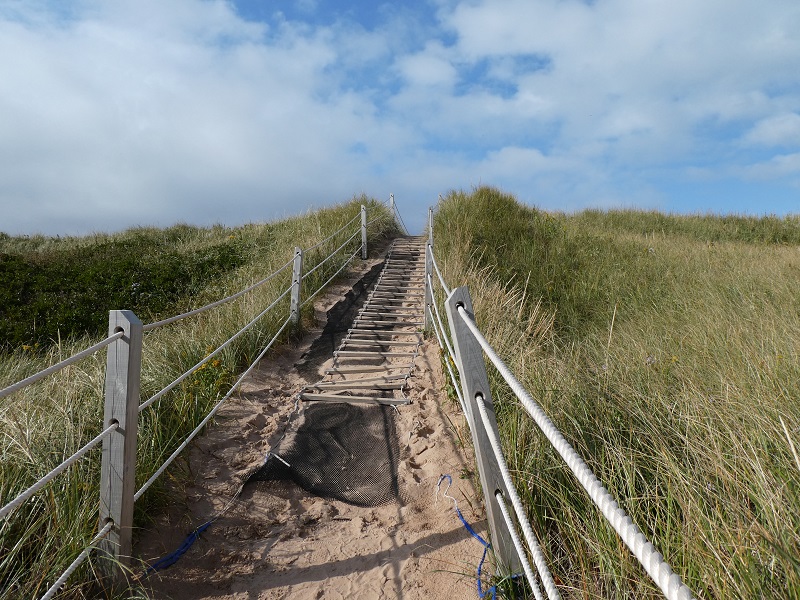 From the top of the dune, looking back to where we’d walked: 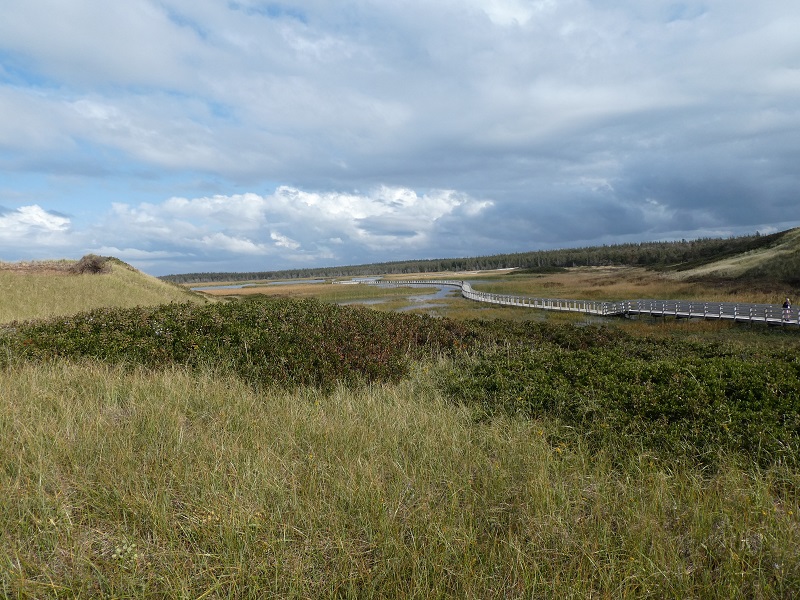 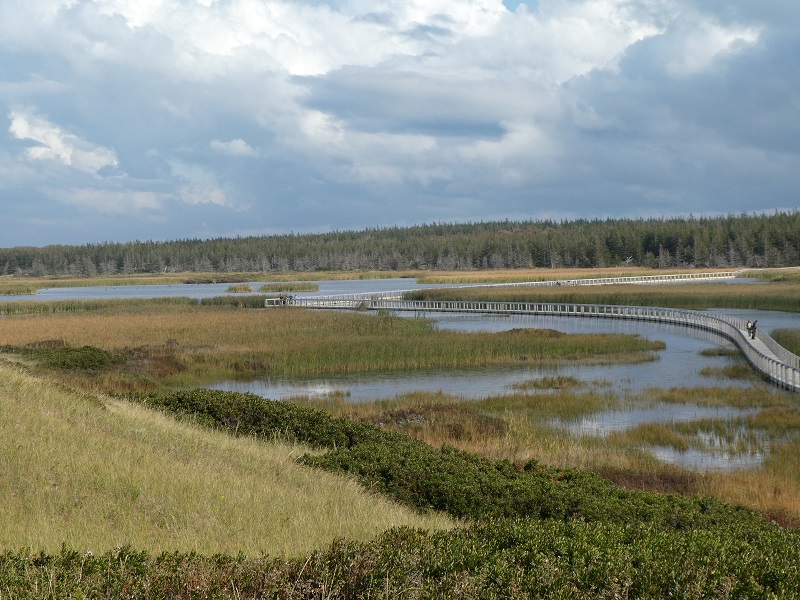 And Ruth and Darlene were climbing to join me: 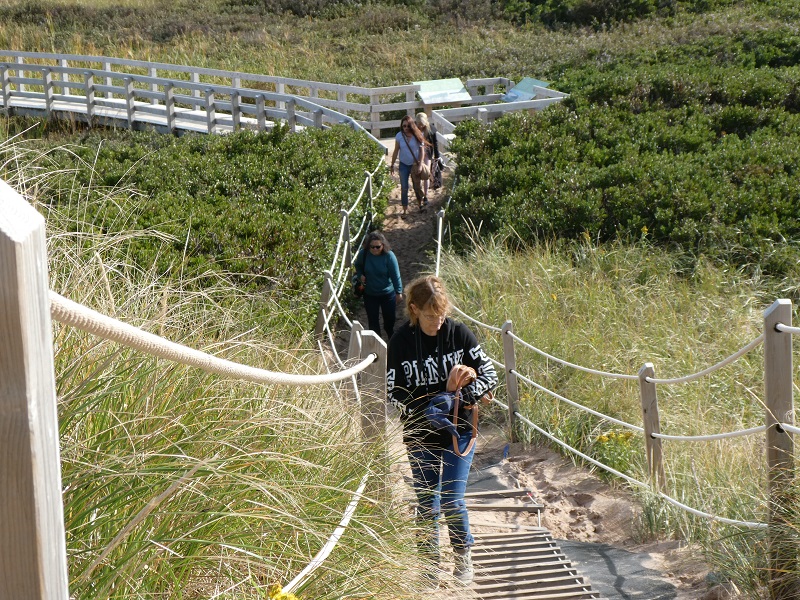 What we found on the other side of the dune was also astonishing.  I’ll save those pictures for my next post.