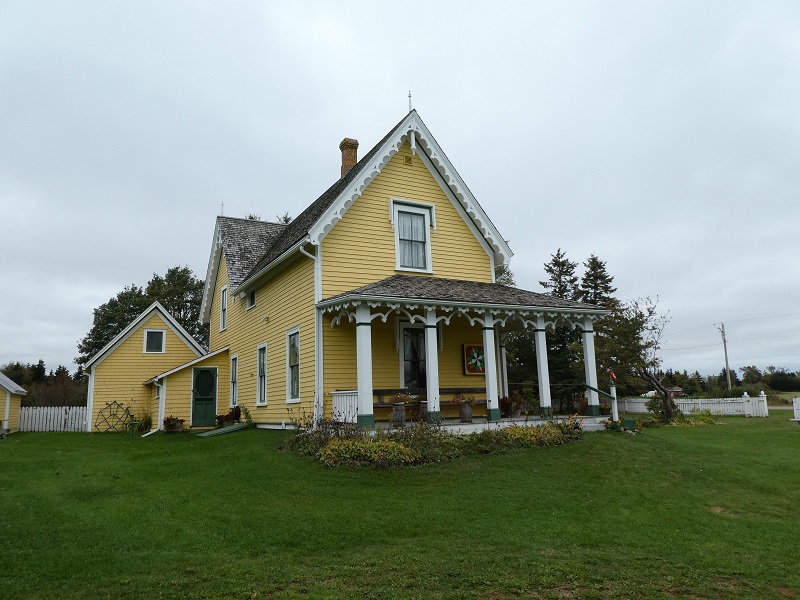 This is the story of my Road Trip to Prince Edward Island with my childhood friends. In late September, we packed up Darlene’s car and drove from Virginia to Canada, where we had a cottage booked.

On Monday, we visited Green Gables Heritage Place, took the path through the Haunted Wood, visited Montgomery Park, saw the site of L. M. Montgomery’s Cavendish home, and took a shore drive back to our cottage.

On Tuesday, we visited L. M. Montgomery’s Birthplace, the Green Gables Museum at Silver Bush, and saw Anne of Green Gables: The Musical.

On Wednesday, we drove to Greenwich Dunes, where we walked through old farmland and woods, on a floating boardwalk right through a lake, and then over dunes onto the beach.

By now, I’d figured out my phone didn’t work in Canada, and we’d been lucky that my GPS had gotten us to the cottage on Sunday night. But we did have internet at the cottage, so I could check my email and Facebook there. Just before we left, I saw my sister Wendy had posted in our Siblings group on Facebook. (There are 13 of us siblings, so Facebook is a necessity!) She’d posted how sorry she was to hear the sad news and that she would look for bereavement fares to Los Angeles.

My heart sank, and I realized my mother must have passed away at last. I say “at last,” because she’s had Alzheimer’s for approximately ten years and had been on hospice care for almost two years. Even before she was on hospice, she was doing badly enough that I expected to get the news of her passing at any time. Now she was bedridden and couldn’t talk and had to have her food pureed to be able to eat.

The drive was wonderful! I was navigating the many turns while Darlene was driving. It took us around and about the shoreline, so we saw lots of coastline as well as lots of beautiful fields and forests. I was in a melancholy state because of thinking my mother had passed away, though I do remember thinking it wasn’t quite right for Wendy to call it “sad” news. Because I’d hoped for my mother to be free from her suffering for years. The person it would be most sad for was my Dad, who had been tenderly caring for her through her illness. He’d waited to retire until five years earlier, when he was 75, but since that time, he’d been caring for her full-time. I knew he’d miss her, but that it would also be a huge weight off his shoulders.

So it was a lovely place to be thinking about my mother’s life and how she would be in a better place. Before we got back to the cottage, I told Darlene and Ruth about a dream my sister Becky had a few years before. Becky said it was so vivid, she thought when she woke up from it that she’d get the news my mother had died. In the dream, Becky was climbing a long stairway with Mom, who was eager to climb them (and able to climb them!) and excited. At the top of the stairs was a doorway. And I don’t remember all the beautiful details — except they fit a recent book I’d been reading about near-death experiences. But Jesus was at the top of the stairs and his eyes were shining with love. And Becky left Mom there in Jesus’ arms, and she was so happy.

So thinking about that, I couldn’t be too sad for my Mom, right?

[Stay tuned to when I found out what really happened after we got back to the cottage that evening.]

Anyway, we were having a wonderful time on the winding North Cape Coastal Drive, navigating by paper map, when I started wanting to find a place to use a restroom. Since we’d seen a super nice Visitor Information Centre the day before, I started looking for the “I” symbol on the map.

We went down a side road — it looked like there was one not far from our route — but it ended up being a dead end and no Visitor Information Centre in sight. But after we turned around, I saw a sign for “Bideford Parsonage Museum.” And I called out, “Let’s stop!”

You see, Bideford is the first place where L. M. Montgomery taught school when she was nineteen years old. I’d read that there was a museum in the parsonage where she boarded while she taught there, but it was farther from Cavendish than any of the other L. M. Montgomery sites, and I’d never worked out exactly where it was. So finding it that Thursday morning was completely serendipitous. (And we were able to use the restroom, too!)

This is an example of how packed some of the rooms were! 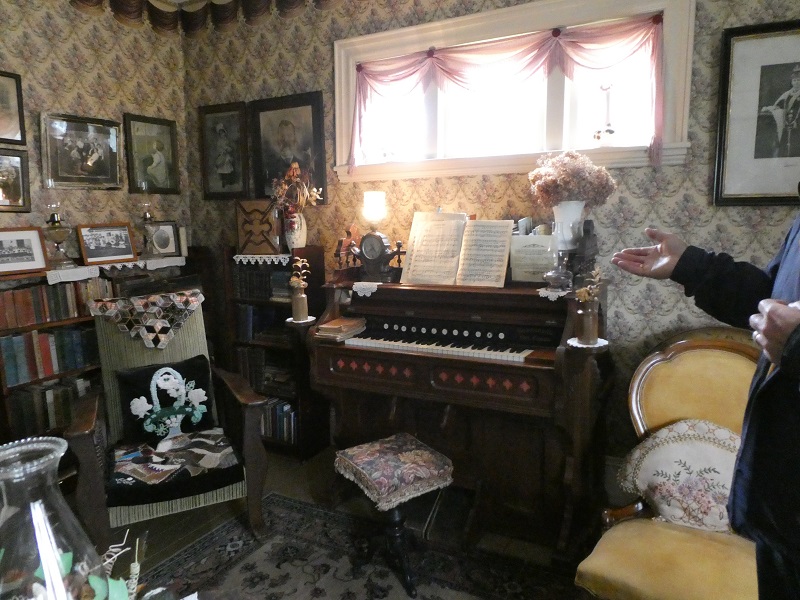 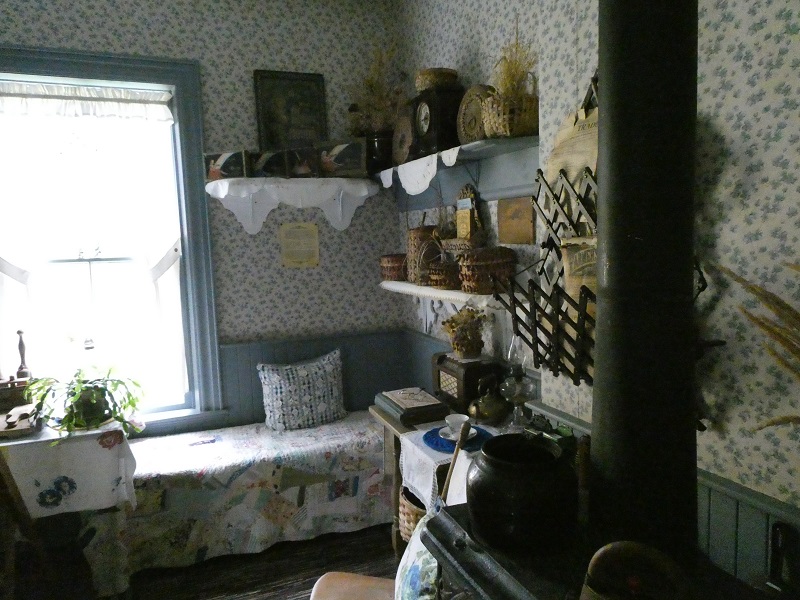 I think this contraption was for washing clothes: 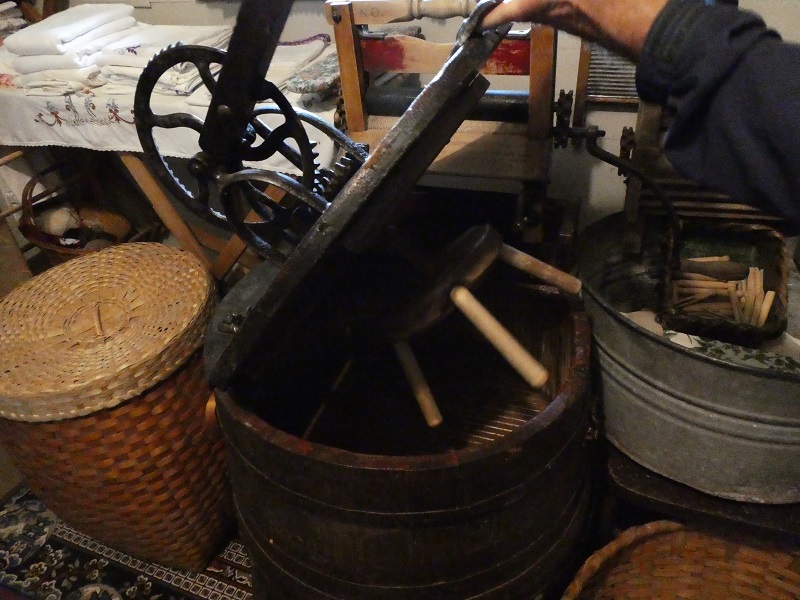 And I think this was a butter churn, but I might be totally wrong. (I didn’t take notes!) 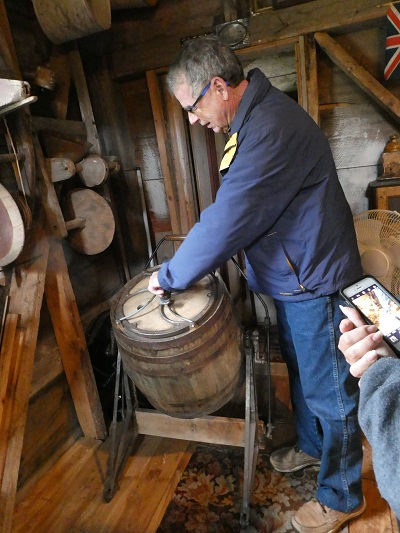 The old kitchen utensils and pots and pans were really fun to look at. 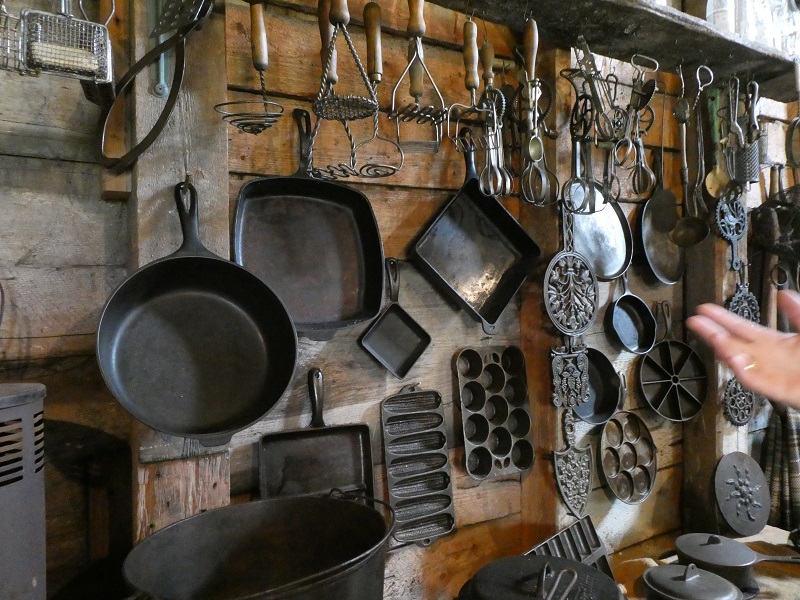 And this fun display had a story posted next to it:

While Lucy Maud was boarding at the Parsonage, Mrs. Estey made a layer cake to serve to a visiting minister. By mistake, she flavoured the cake with anodyne liniment. Lucy Maud wrote, “Never shall I forget the taste of that cake, and the fun we had over it, for the mistake was not discovered until teatime. The minister ate every crumb of his piece of cake. What he thought of it we never discovered. Possibly he imagined it was simply some new-fangled flavoring.” It was from this incident that the idea for a liniment cake in Anne of Green Gables was derived. 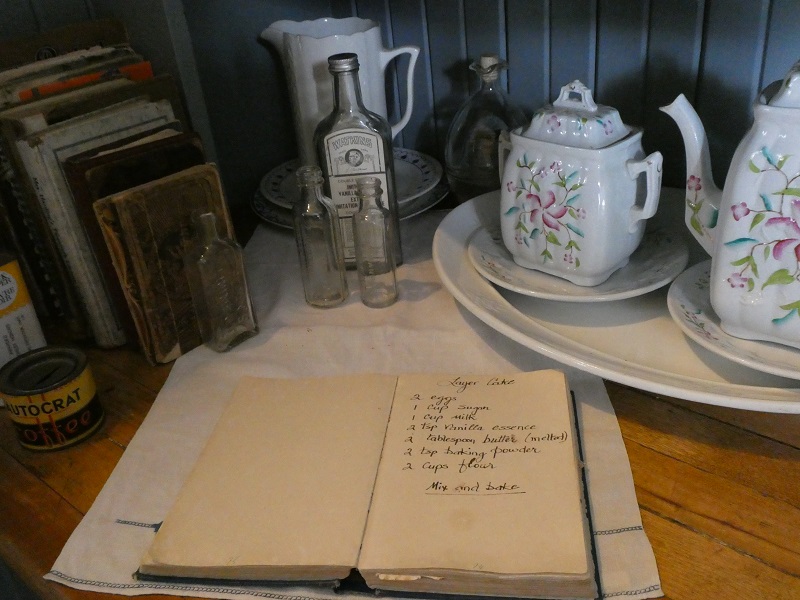 An old map of Prince Edward Island next to a typewriter like the one Maud Montgomery used: 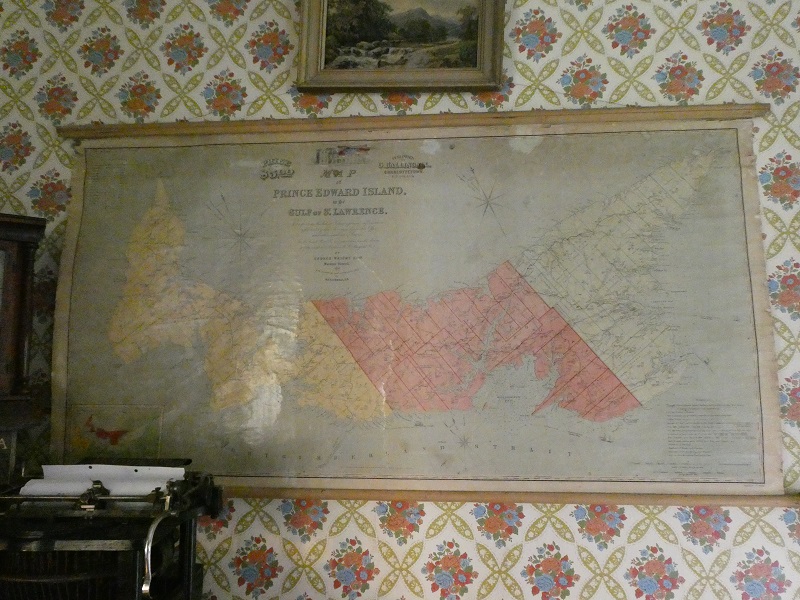 But my favorite room was the bedroom where Maud stayed while she lived there. Every morning before school she would get up early and write. A post on the wall said:

In 1893-94, while Lucy Maud attended Prince of Wales College studying for her teacher’s license, she continued to send her writings to various publishers. One day when she went to the Charlottetown post office, she received a thin letter from an American magazine accepting her poem “Only a Violet.” The editor offered her two subscriptions to the magazine in payment. She was encouraged and wrote, “It is a start and I mean to keep on.” During her year in Bideford, she would get up early in the morning to write before going to school. The Parsonage was sometimes so cold that she would have to wear gloves and sit on her feet in order to keep warm. Her poem “On the Gulf Shore” was published in February 1895. On June 17, 1895, she received word that the Ladies’ Journal had accepted a story. Both “A Baking of Gingersnaps” and “When Apple Blossoms Blow” were published in July 1895. 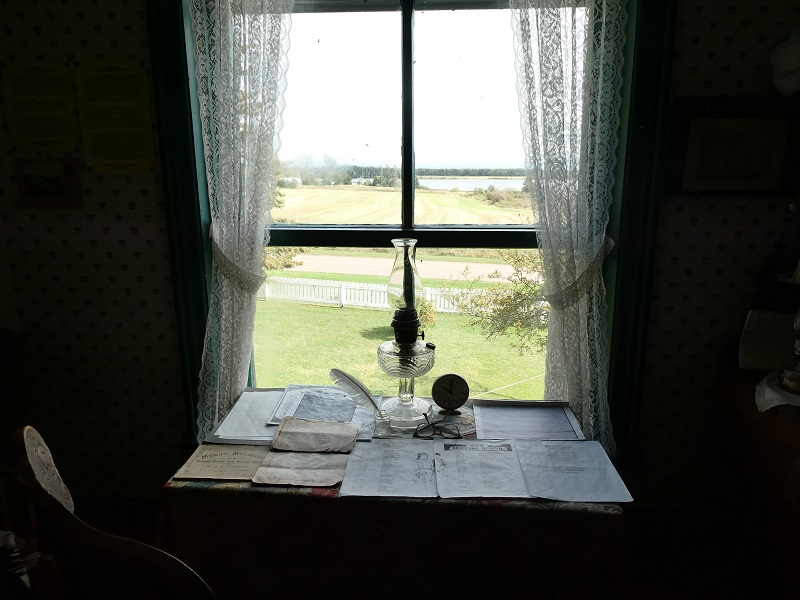 They’ve furnished the bedroom as Maud might have had it, with extra photos of her and her family.

This is from a note posted on the wall:

Maud’s Room — This was L. M. Montgomery’s room from August 3, 1894 until May 11, 1895. When she first moved in, she wrote, “I have a great big room — too big — commanding a lovely view of the bay.” The view from the window has changed very little from the time when Maud sat here and received inspiration to write. In her Journals, pictures of her own bedroom at home show a spool bed of this design. The bed has a wooden frame and woven spring. The mattress is a feather tick — a large cotton cloth case filled with feathers and down. This is the original floor that was in Maud’s room — note the square head nails. This is the only room that did not have hardwood flooring in it. A closet that had been built in the corner in later years has been removed.

Although the condition of the schoolhouse left much to be desired, in recollection of her year in Bideford, Maud wrote that it had been “a varied chapter of pleasure and toil, hardships and joys.” Her summary was — “This has been a very happy year for me and I shall never think of that old school without a very kindly feeling.” After she moved home to Cavendish on July 1st, she was most wretchedly lonesome — as lonesome for Bideford as she was homesick for Cavendish her first week there. On July 21, she wrote that she was just beginning to get over her lonesomeness for Bideford. 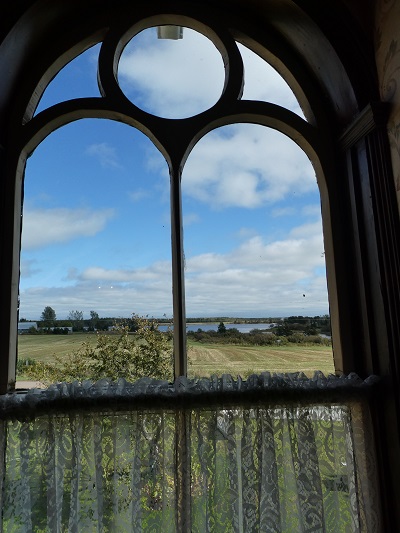 And the sun came out while we were taking the tour! Here’s the view from the front porch: 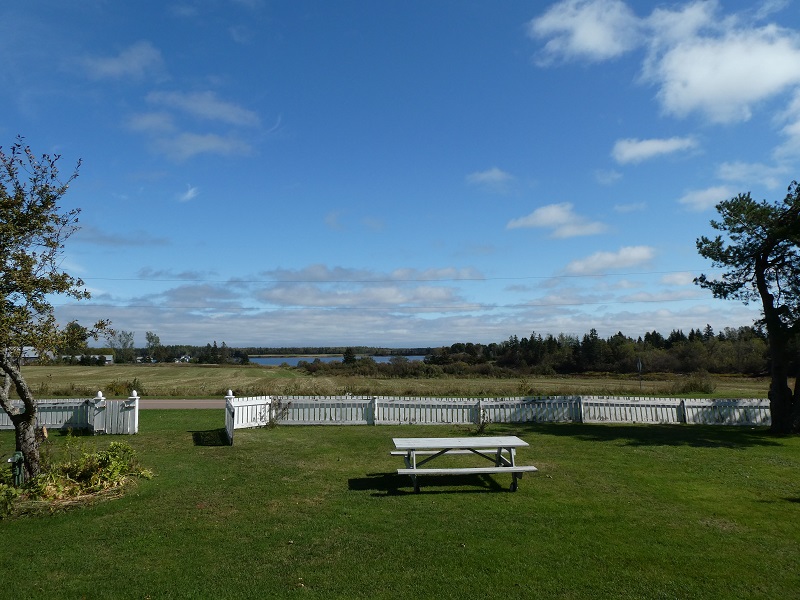 Looking back at the house: 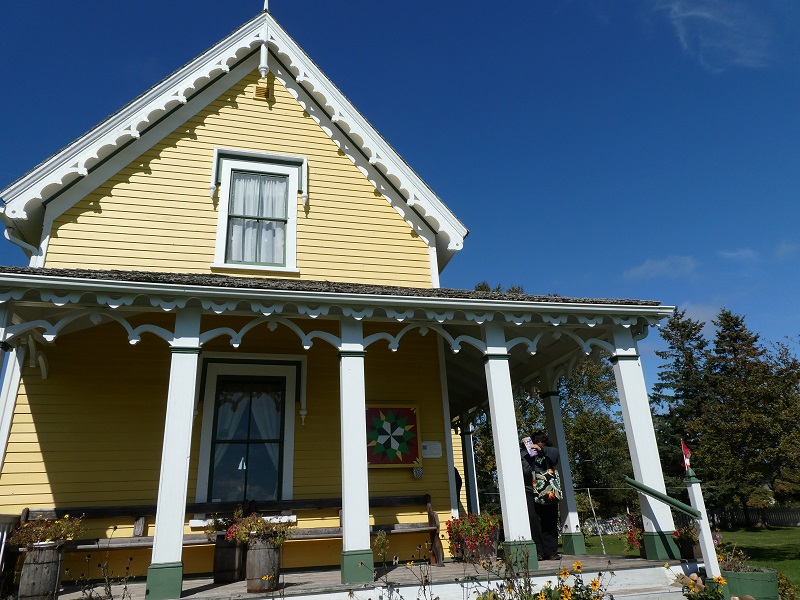 It had been a serendipitous stop. We had a lovely time, as well as a nice break from driving. 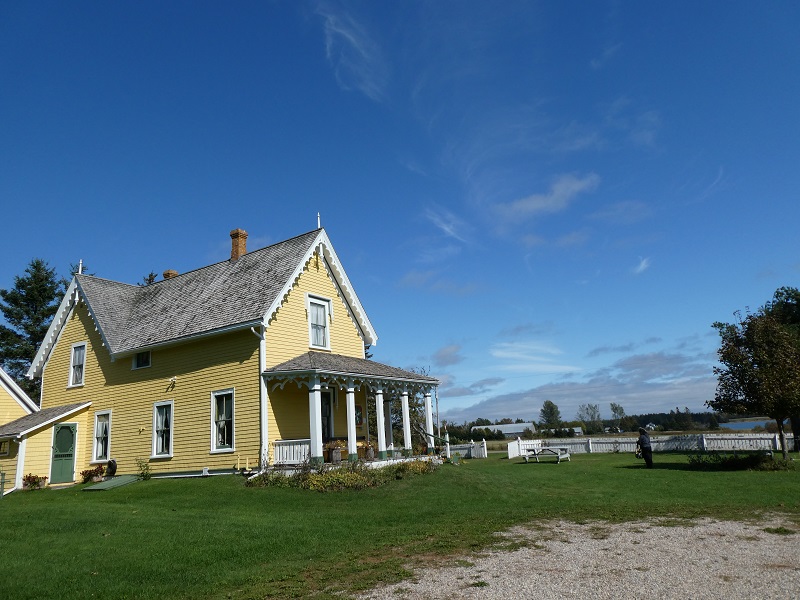 Here’s a little more detail of the view from the front yard. Have I gotten across yet how common this kind of beauty is on Prince Edward Island? Everywhere we went had this kind of lush beauty. I’ve told people that it’s not L. M. Montgomery’s fault — she mentions the sea often — but until I’d been on Prince Edward Island, I hadn’t even noticed how much the sea is described in her books. I’d tend to pass over those parts and my imagination of the island settings was missing the water that is so present. 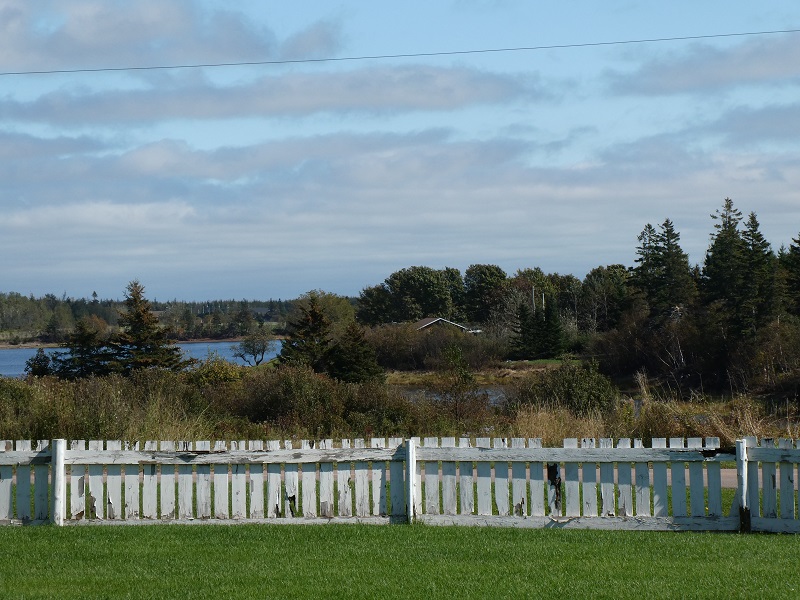 My next post will cover our time at North Cape — and what had really happened with my family.

(Can you see that this was a beautiful place to be thinking my mother had passed out of her suffering? I was with two of my best friends and I was bombarded by beauty, and it really felt peaceful. We were playing some of my favorite Christian music while we drove, too. Some of the songs brought tears to my eyes in spots, but the overall feeling was peace and thankfulness that my mother was at the end of her suffering, and my father was released from caring for her. All that peace did help when I found out the truth.)