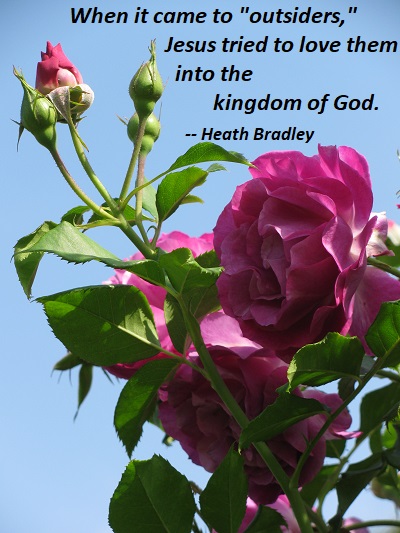 If we are going to take Jesus seriously, then we need to see how he talked about hell and we need to pay close attention. Although evangelists most often preach about hell to try to convert people to Christianity, we need to reflect on the significance of the fact that Jesus never tried to scare people into the kingdom of God by threatening them with hell. The only people to which Jesus talked about hell were his own followers and especially to the self-righteous religious leaders of his day. We often assume that heaven is for good people and that hell is for bad people. But according to Jesus’ message and ministry, it is the reverse: heaven is for bad people and hell is for “good” people. Heaven is for people who know they are in need of large doses of grace, while hell is for people who alienate themselves from God and others through the self-sufficiency and self-centeredness of their own pride (Luke 18:9-14). Jesus didn’t see those who were outside the bounds of proper religion as the ones in danger of hell. He saw the ones on the inside as being in the most spiritual danger, because when we are on the inside, it is easy to become complacent and presumptuous and turn our focus on making judgments about others. This is precisely what many of the Pharisees, the self-appointed spiritual and moral guardians of society, did in their day. They were so sure of their insider status with God that they turned their energies towards using threats of hell to those who didn’t measure up the way they did. In most contexts, then, Jesus’s teachings on hell took the Pharisees to task by turning their judgments back on themselves. The threat of hell was primarily used by Jesus, not to encourage speculation about others in the world to come, but to encourage examination of our own lives here and now concerning all the ways in which our pride, greed, lust, anger, judgmentalism, and apathy may be leading us down a wide road to self-destruction (Matt 7:13-14).

When it came to “outsiders,” Jesus tried to love them into the kingdom of God. Jesus did not try to convert sinners by threatening them or heaping guilt or shame on them, as did many of the Pharisees (Matt 23:4). He tried to transform them by eating with them, by scandalously welcoming them into an unconditional embrace of love. This shockingly inclusive compassion that Jesus showed to notorious and egregious sinners like tax collectors and prostitutes was what magnetically drew the crowds of ordinary people to him, and at the same time enraged the religious leaders to conspire against him.

I am convinced that we Christians have for too long preached about hell as the Pharisees did, not as Jesus did. We have made it only about “them,” not us. You see, when we make hell just about what happens to outsiders in the next life, we miss the fact that Jesus made his warning about hell primarily in relation to what insiders do in this life.