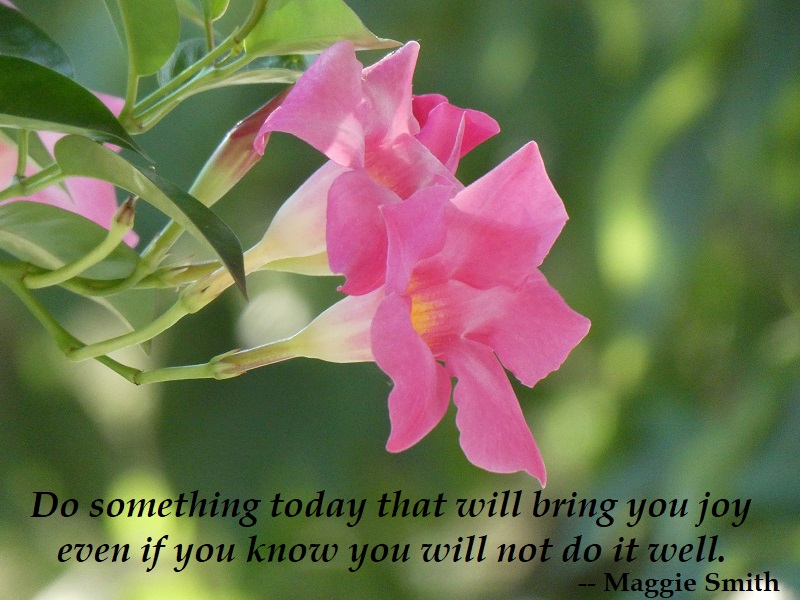 Do something today that will bring you joy even if you know you will not do it well. Let go of the idea that you have to be the best at something to do it. Train yourself to crave experience, not perfection. 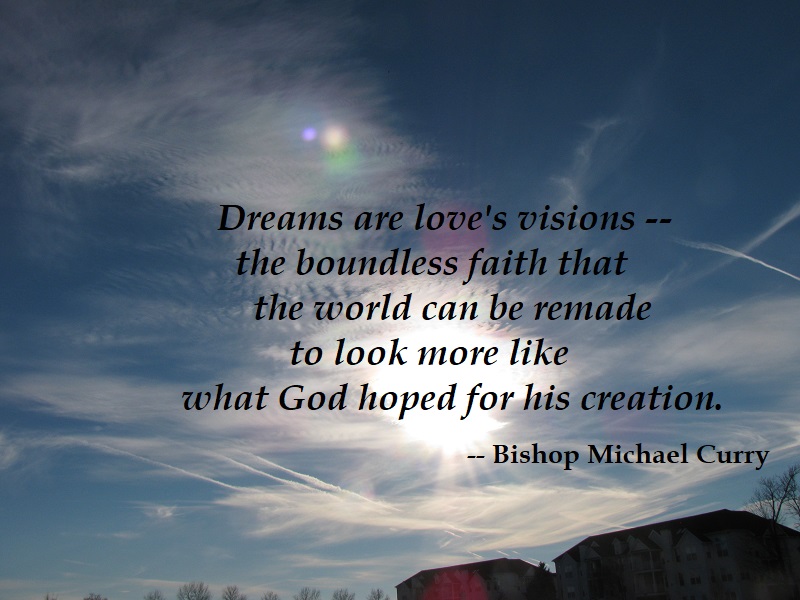 Dreaming — impractical, foolish, impossible dreaming — gave us the very real civil rights movement. Dreaming gave us a South Africa freed from apartheid. Dreaming, as I see it, has saved me and many others from turning to despair and destruction in the darkest days, when evil seems to be winning. Dreams are love’s visions — the boundless faith that the world can be remade to look more like what God hoped for his creation. 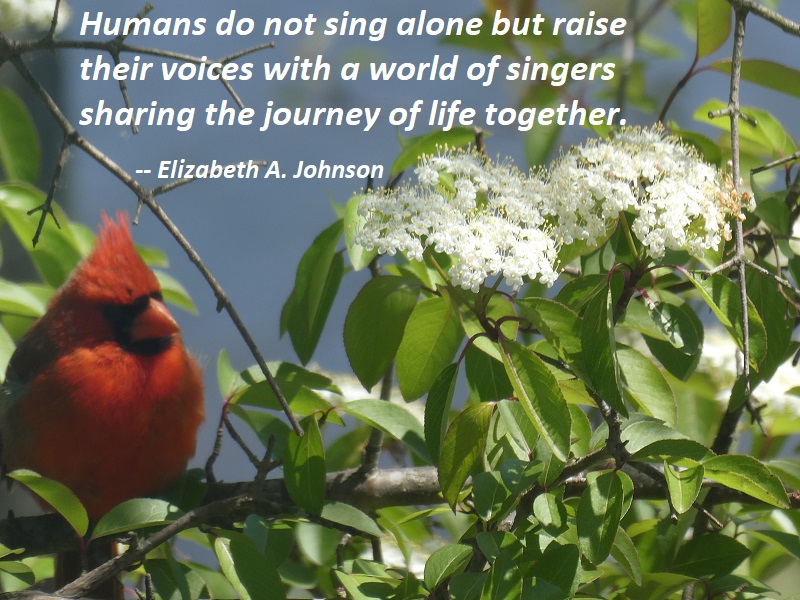 The shared capacity to sing points to the many deep genetic connections that link humans to other living beings. In a beautiful article Rhodora Beaton eloquently states, “The image of singing as we go invites a broader vision of the journey song, one that includes the duets of gibbons, the beat-keeping dances of parrots, and the elaborate and distinctive calls of whales and other aquatic mammals.” Humans do not sing alone but raise their voices with a world of singers sharing the journey of life together. 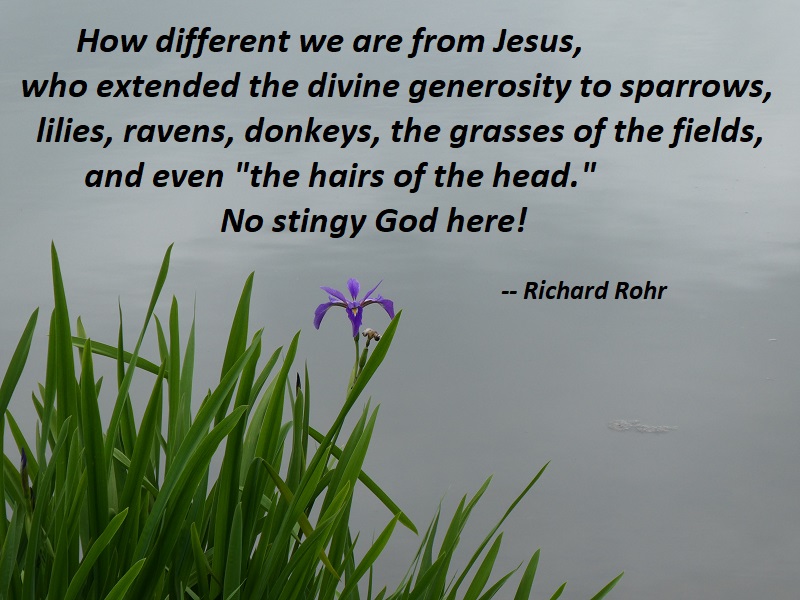 Strangely, many Christians today limit God’s provident care to humans, and very few of them at that. How different we are from Jesus, who extended the divine generosity to sparrows, lilies, ravens, donkeys, the grasses of the fields (Luke 12:22), and even “the hairs of the head” (Matthew 10:29). No stingy God here! (Although he did neglect the hairs of my head.) But what stinginess on our side made us limit God’s concern — even eternal concern — to just ourselves? And how can we imagine God as caring about us if God does not care about everything else too? If God chooses and doles out his care, we are always insecure and unsure whether we are among the lucky recipients. But once we become aware of the generous, creative Presence that exists in all things natural, we can receive it as the inner Source of all dignity and worthiness. Dignity is not doled out to the worthy. It grounds the inherent worthiness of things in their very nature and existence. 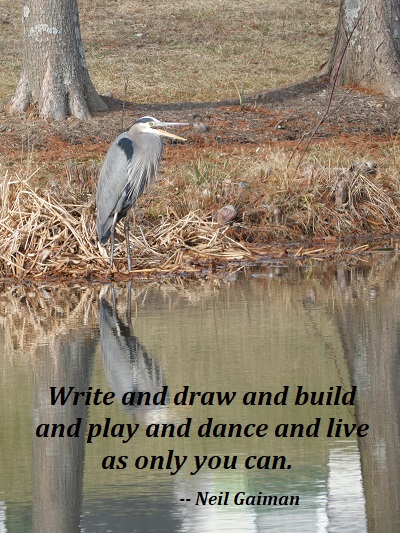 The one thing that you have that nobody else has is you.

Your voice, your mind, your story, your vision. So write and draw and build and play and dance and live as only you can.

The real issue, though, is how to understand divine anger in the context of overwhelming graciousness and mercy. The danger is that within a patriarchal, punitive setting, speaking of a wrathful God has been used to justify holy wars and torture, hostility to outsiders, and debilitating guilt in sensitive consciences. But righteous anger is a different breed of cat. It is profoundly ethical. It waxes hot in moral outrage because something good is being violated. Arising from love, it awakens energy to act to change the situation. Editing a powerful book of photographs of African American women, Barbara Summers was struck by the creative power of anger of even the most accomplished of these women: “A truly beautifying discovery for me was to find so much love in anger. It was a fist-up, death-defying love that challenged the unfair conditions of life and muscled in on injustice as it nursed both sides of a nation.” This is not anger with the spirit of murder in it, but fury that is creative of life. Much feminist in-depth analysis, such as Beverly Harrison’s influential essay “The Power of Anger in the Work of Love,” makes clear that far from being the opposite of love, righteous anger is a vivid, moral form of caring that empowers transformation.

In the context of God’s graciousness and mercy, divine anger functions for justice. It bespeaks a mode of caring response in the face of what harms beloved human beings or the created world itself. “The exploitation of the poor is to us a misdemeanor; to God it is a disaster,” writes Abraham Heschel. Divine wrath is a worthy response. True, it lasts but a moment; true, it is instrumental, aimed at change and conversion. But it stands as an antidote to sentimentality.

Failure gives us the chance to experiment with life, to play with it a bit, to move in different directions until we find, as we learned from Cinderella as children, the shoe that fits. Because what doesn’t fit will irritate us all our life. We will live in the unnecessary pain that comes from forcing ourselves into something that not only embarrasses us but cramps our hearts and damps our spirits.

Life is about participating in the fine art of finding ourselves — our talents, our confidence, our sense of self, our purpose in life. The world waits for each of us to give back to the best of our ability what we have been given for its sake. The only way to know what that is depends on learning to follow our hearts until our hearts and our abilities are one, until what we love and what we do well are one and the same thing.

— Joan Chittister, Between the Dark and the Daylight, p. 64

Inspiration comes far more often during work as things get rolling than before you sit at the typewriter. This is because the largest part of the job of the artist is to listen. To listen to the work and to go where it tells you to go. And this involves faith. Letting go of your own control and having faith in something you do not control.

To pray is also to listen. To move through my own chattering to God, to get beyond those words to that place where I can be silent and then listen to what God may have to say.

The worst thing a day job does is take time away from you, but it makes up for that by giving you a daily routine in which you can schedule a regular time for your creative pursuits. Establishing and keeping a routine can be even more important than having a lot of time. Inertia is the death of creativity. You have to stay in the groove.

Many of us think our happiness depends on things outside of us. We think that we have to wait to be happy until some of these things are taken care of, but happiness comes from within. It is the best gift we can give the world, because happiness is infectious. Happiness is enlightening, and it gives hope. As a form of love, happiness spreads around. If a situation seems stuck, bringing happiness to it moves it forward, because there is so much creativity in happiness.