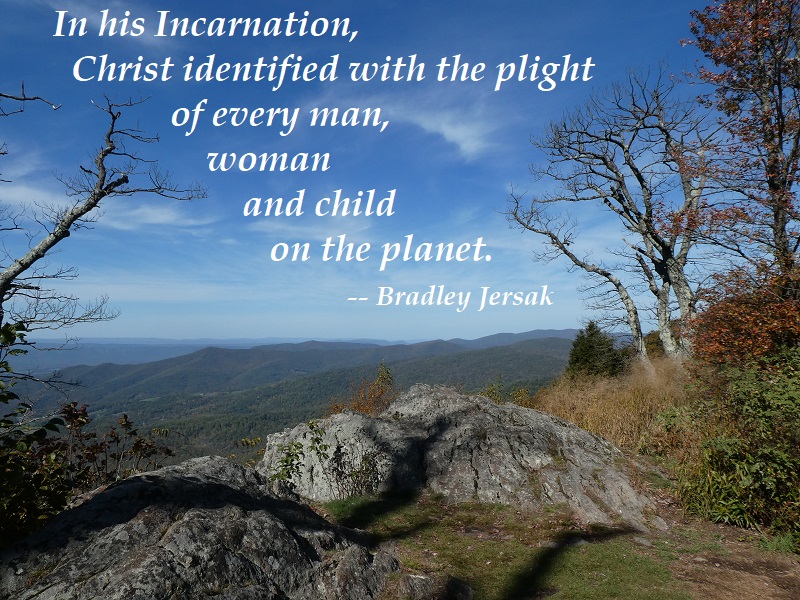 This identification extends to all, including those we might consider “the least” — least healthy, least wealthy, least moral, least innocent, etc. God’s heart for the poorest in every category is not an application of the gospel. It’s intrinsic to it. We don’t see Christ in the “least of these” because they’ve chosen to follow him, but because in his Incarnation, Christ identified with the plight of every man, woman and child on the planet. 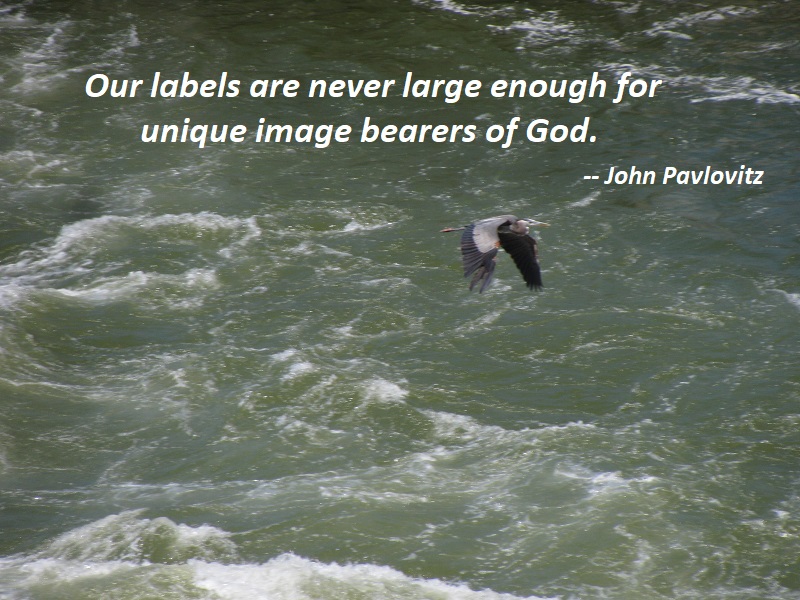 The beauty of the bigger table is that it creates proximity in the way Jesus did. It destroys distance between people, and distance — whether real or imagined — is the enemy of relationship. This chasm allows us to otherize people with little accountability to their reality. It enables us to hold onto the belief that the crudely drawn caricatures we fashion for those we disagree with are at all accurate, allowing us to craft a clearly defined us-vs.-them narrative and place them opposite us. This simple narrative can’t accommodate people’s individual stories, as this is too labor intensive and time consuming. Instead it lumps those stories together into the closest-fitting generalization (a political party, a religious tradition, a people-group stereotype) and operates with that as truth. But these containers are simply never adequate. Our labels are never large enough for unique image bearers of God, and unless we become relentless in really straining to see individual people, we will always default to this easy, lazy shorthand, and we will always shortchange the beauty within them. We’ll also be satisfied viewing them from this safe distance of our self-righteousness and shouting through bullhorns or shaking tambourines. 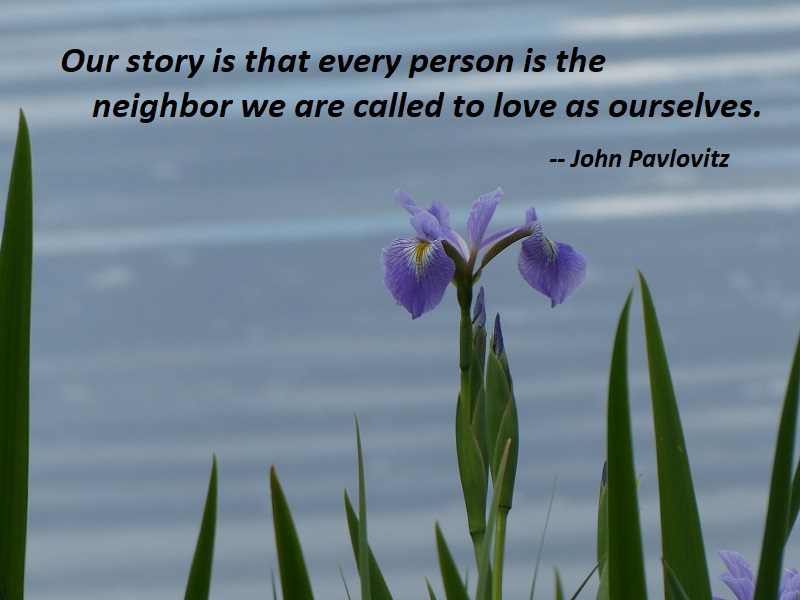 We have in Jesus the greatest model of compassion and kindness ever to walk the planet, and that needs to count for something. It needs to influence how we as followers of Christ interact with people we disagree with, or we end up simply being clanging cymbals, a loud, loveless noise in the ears of those around us, and feeling justified in doing so. We need to figure out how to live without the bullhorn and to find that quiet place of civility that Jesus finds so many times with so many different people. The idea of universal family or kinship is at the core of the Christian faith too, of all people made in the image of God, all creations of the same Creator, all equally flawed, all equally worthy of compassion. Our story is that every person is the neighbor we are called to love as ourselves. 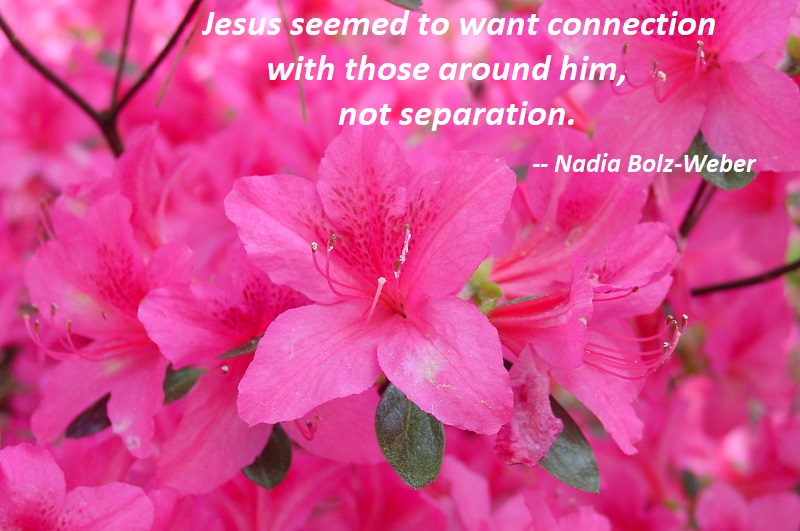 Jesus seemed to want connection with those around him, not separation. He touched human bodies deemed unclean as if they were themselves holy: dead little girls, lepers, menstruating women. People of his day were disgusted that Jesus’ disciples would eat with unwashed hands, and they tried to shame him for it. But he responded, “It is not what enters the mouth that makes one unclean but what comes out of it that defiles.” He was loyal to the law, just not at the expense of the people.

Jesus kept violating boundaries of decency to get to the people on the other side of that boundary, those who’d been wounded by it, those who were separated from the others: the motherless, the sex workers, the victims, and the victimizers. He cared about real holiness, the connection of things human and divine, the unity of sinners, the coming together of that which was formerly set apart. 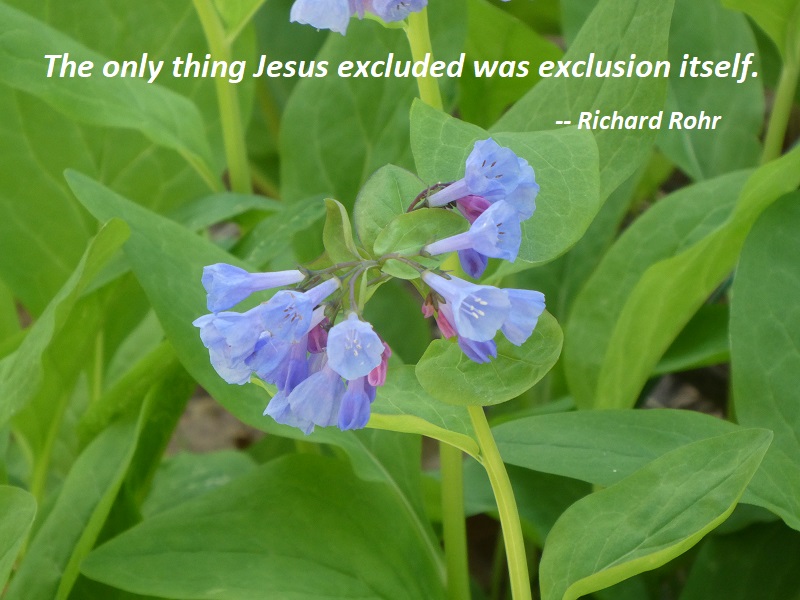 The truly one, holy, catholic and undivided church has not existed for a thousand years now, with many tragic results. We are ready to reclaim it again, but this time around we must concentrate on including — as Jesus clearly did — instead of excluding — which he never did. The only people that Jesus seemed to exclude were precisely those who refused to know they were ordinary sinners like everyone else. The only thing he excluded was exclusion itself. Do check me out on that, and you might see that I am correct. 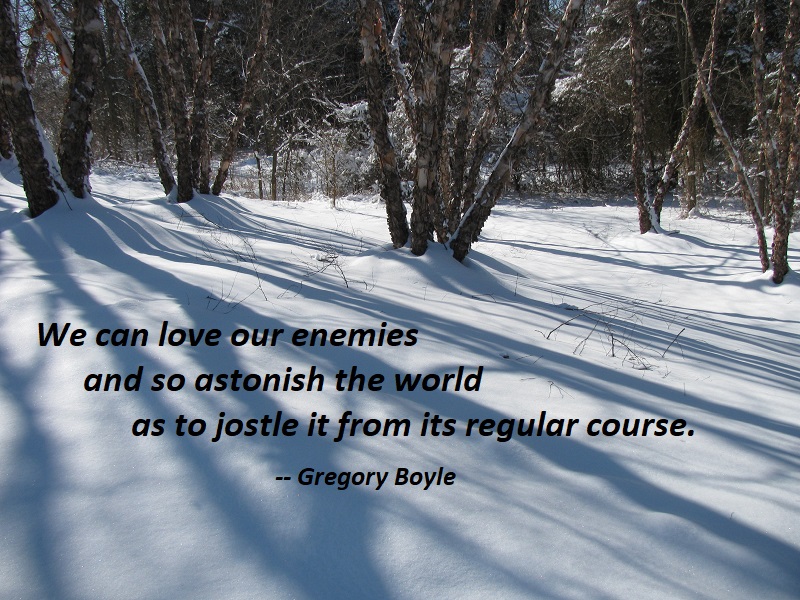 Now, we can be astonished at the authority of Jesus, who calls us to love our enemies. Or we can just love our enemies and so astonish the world as to jostle it from its regular course.

Apparently, light is less something you see directly, and more something by which you see all other things. In other words, we have faith in Christ so we can have the faith of Christ. That is the goal. Christ and Jesus seem quite happy to serve as conduits, rather than provable conclusions. (If the latter was the case, the Incarnation would have happened after the invention of the camera and the video recorder!) We need to look at Jesus until we can look out at the world with his kind of eyes. The world no longer trusts Christians who “love Jesus” but do not seem to love anything else.

Empathy says: You and I are made of the same lovely, heartbroken, and screwed-up stuff. You are not an object to me right now. (Maybe I’m not, either! Let me get back to you on this.) Empathy, a moment’s compassion, seeing that everyone has equal value, even people who have behaved badly, is as magnetic a force as gratitude. It draws people to us, thus giving us the capacity to practice receiving love, the scariest thing of all, and to experience the curiosity of a child.

Compassion isn’t a gift or talent – it’s the natural result of paying attention and realizing the infinite opportunities to connect with others.

If we choose to stand in the right place, God, through us, creates a community of resistance without our even realizing it. To embrace the strategy of Jesus is to be engaged in what Dean Brackley calls “downward mobility.” Our locating ourselves with those who have been endlessly excluded becomes an act of visible protest. For no amount of our screaming at the people in charge to change things can change them. The margins don’t get erased by simply insisting that the powers-that-be erase them. The trickle-down theory doesn’t really work here. The powers bent on waging war against the poor and the young and the “other” will only be moved to kinship when they observe it. Only when we can see a community where the outcast is valued and appreciated will we abandon the values that seek to exclude.