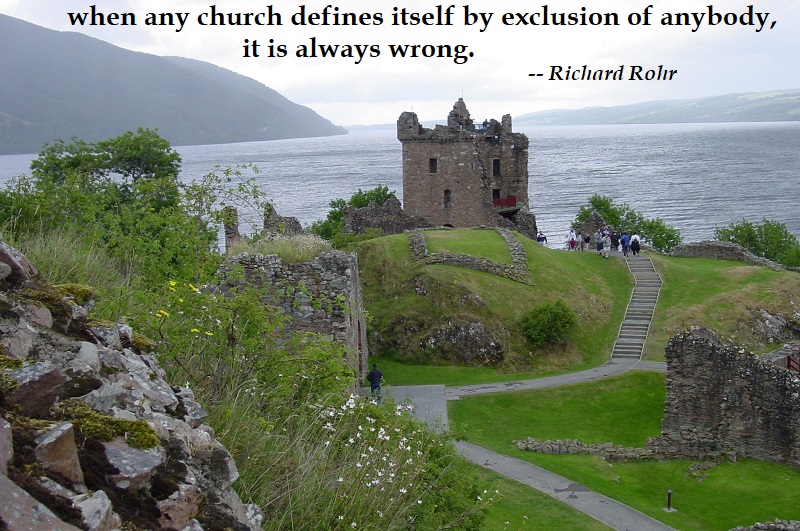 The church was meant to be that group that constantly went to the edges, to the least of the brothers and sisters, and even to the enemy. Jesus was not just a theological genius; he was also a psychological and sociological genius. Therefore, when any church defines itself by exclusion of anybody, it is always wrong. It is avoiding its only vocation, which is to be the Christ. The only groups that Jesus seriously critiques are those who include themselves and exclude others from the always-given grace of God.

Only as the People of God receive the stranger, the sinner, and the immigrant, those who don’t play our game our way, do we discover not only the hidden, feared, and hated parts of our own souls, but also the fullness of Jesus himself. 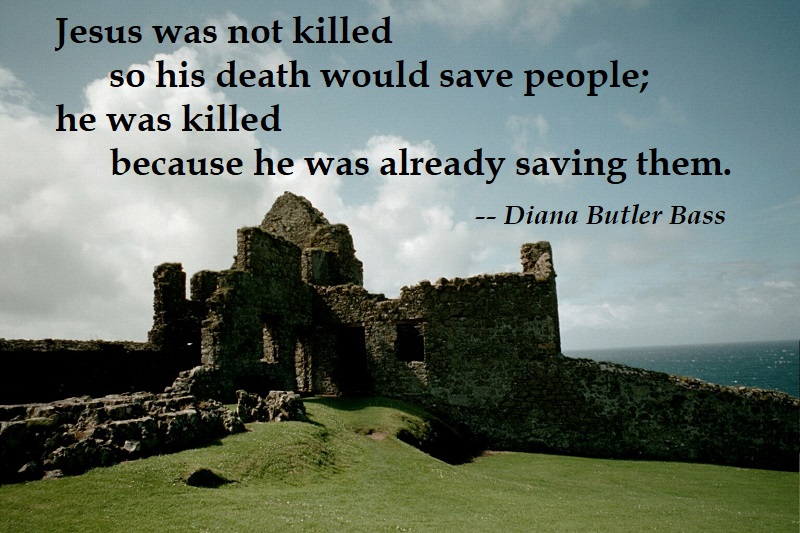 It was not just the rich young man who asked Jesus how to be saved. All sorts of people in the gospels got saved before Jesus died on the cross. When Jesus healed, they experienced salvus, God’s salvation. They followed him. Lives were changed, transformed. Disciples did give up riches and goods that they might inherit eternal life. Tax collectors abandoned their jobs and surrendered their social standing to eat with him. Children, slaves, soldiers, peasants, fishermen, farmers, prisoners, the sick, the blind, the lame — when they encountered Jesus, they found salvation, the wholeness, the healing, the oneness with God that had only been the stuff of longing. Every miracle, every act of hospitality, all the bread broken and wine served, everything that Jesus did saved people long before Rome arrested and murdered him.

It was all this loving and healing and saving that got him in trouble with authorities. He was not killed so his death would save people; he was killed because he was already saving them. He threatened a world based in fear, one held in the grip of Roman imperialism, by proving that a community could gather in love, set a table of plenty, and live in peace with a compassionate God. Jesus did at-one-ment long before being nailed to a cross. At-one-ment was the reason the authorities did away with him. No empire can stand if the people it oppresses figure out that reconciliation, love, liberation, and oneness hold more power than the sword. So Rome lynched Jesus: tortured him and hung him on a tree. That is the raw truth under all those sophisticated atonement theories.

Jesus was born a savior, and he saved during his lifetime. “Fear not!” “Peace on earth!” He did not wait around for thirty-three years and suddenly become a savior in an act of ruthless, bloody execution. Indeed, the death was senseless, stupid, shameful, evil. It meant little other than silence without the next act — resurrection — God’s final word that even the most brutal of empires cannot destroy salvus. This is no quid pro quo. Rather, Easter proclaims that God overcoes all oppression and injustice, even the murder of an innocent one. At-one-ment means just that. Through Jesus, all will be renewed, made whole, brought back into oneness, reunited with God. Salvation is not a transaction to get to heaven after death; rather it is an experience of love and beauty and of paradise here and now. No single metaphor, not even one of Paul’s, can truly describe this. We need a prism of stories to begin to understand the cross and a lifetime to experience it. 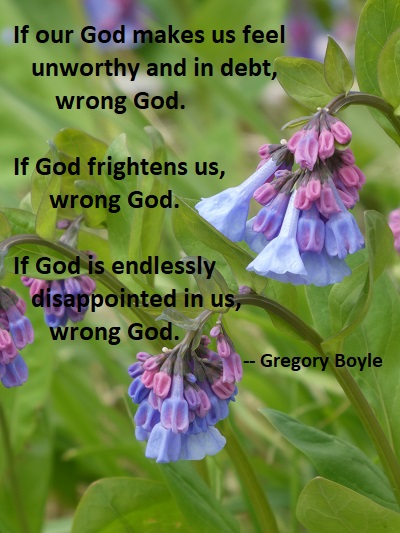 At one time or another, we all had a version of God that was rigid. But the depth of our own experience tells us that our idea of God wants to be fluid and evolving. As we grow, we learn to steer clear of the wrong God. We “break the jar” and it radically challenges our way of seeing reality. Consequently, a change in our conception of God can transform the character of our culture…. The Tender One has no need to judge, because this God understands. 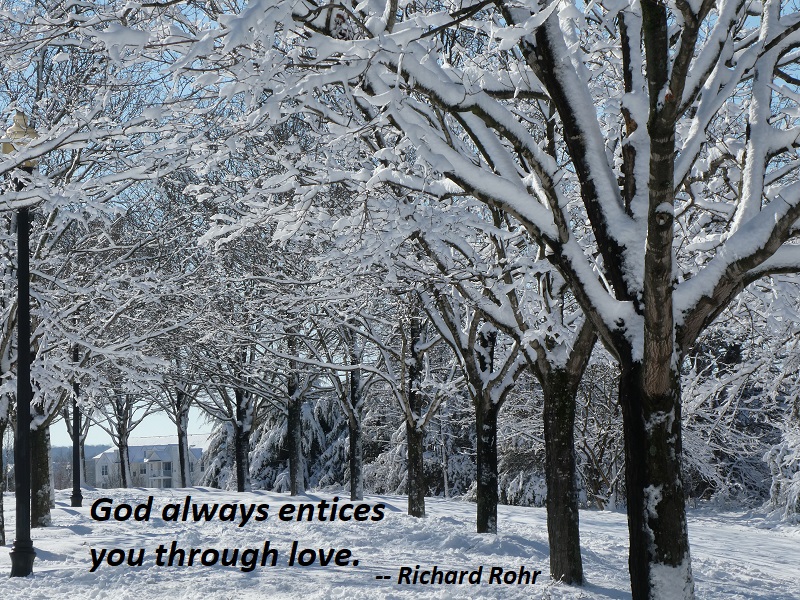 God always entices you through love.

You were probably taught that God would love you if and when you changed. In fact, God loves you so that you can change. What empowers change, what makes you desirous of change, is the experience of love and acceptance itself. This is the engine of change. If the mystics say that one way, they say it a thousand ways. But, because most common religion has not been at the mystical level, you’ve been given an inferior message — that God loves you when you change (moralism). It puts it all back on you, which is the opposite of being saved. Moralism leads you back to navel-gazing and you can never succeed at that level. You are never holy enough, pure enough, refined enough, or loving enough. Whereas, when you fall into God’s mercy, when you fall into God’s great generosity, you find, seemingly from nowhere, this capacity to change. No one is more surprised than you are. You know it is a total gift. 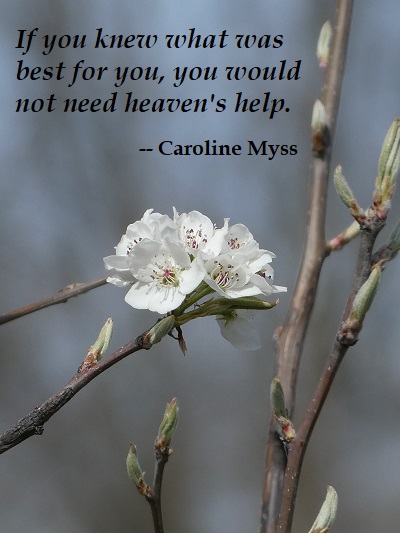 We need the grace of Trust more than we realize. We want everything to happen now — right now — in our lives. And we want to recognize the sound of every footstep we hear. We have to stop wanting, wanting, wanting life to be what it will never, ever be — familiar, controllable, and wrapped around our personal needs. That impossible craving is what leads to attacks of stress, panic, and inner madness. Instead we must contact the grace of Trust. We must learn to rest easy in the mobius of prayer and trust, guidance and action. Rather than imagining greatness or humiliation, power or powerlessness. Your imagination is an engine of creation, a vessel through which your inside coordinates the outside of your life. Imagining greatness for yourself is rooted in the fear of humiliation. The end product is an ego full of hubris. Driven by fear, you will end up in the fog of panic and uncertainty. The discipline — and it is a discipline — is to apply the grace of Trust. Trust brings detachment. You do not have to interfere with heaven’s work. If you knew what was best for you, you would not need heaven’s help. Just Trust. 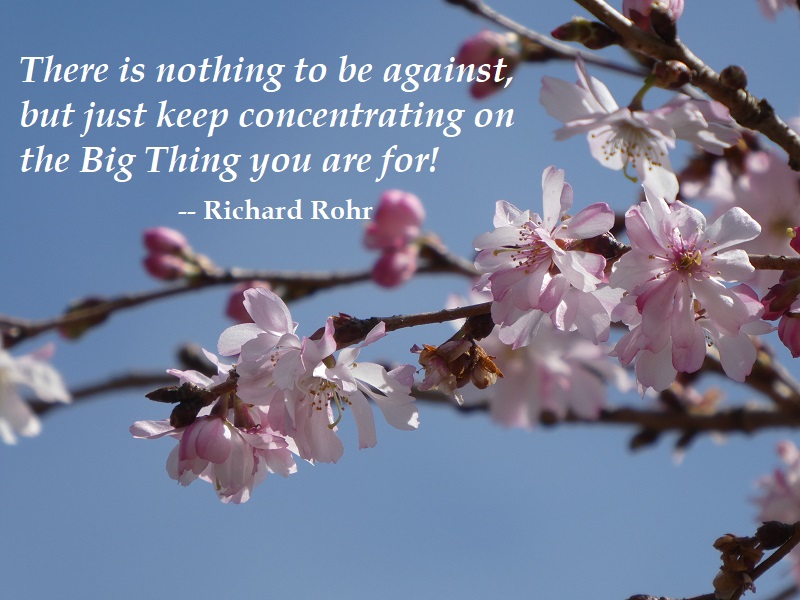 I would insist that the foundation of Jesus’s social program is what I will call non-idolatry, or the withdrawing of your enthrallment from all kingdoms except the Kingdom of God. This is a much better agenda than feeling you have to attack things directly, or defeat other nation-states, the banking system, the military-industrial complex, or even the religious system. Nonattachment (freedom from full or final loyalties to man-made domination systems) is the best way I know of protecting people from religious zealotry or any kind of antagonistic thinking or behavior. There is nothing to be against, but just keep concentrating on the Big Thing you are for! (Think Francis of Assissi and Mother Teresa.) Paul’s notion of sin comes amazingly close to our present understanding of addiction. And he thus wanted to free us from our enthrallments with what he considered “mere rubbish” (Philippians 3:8), which is not worthy of our loyalty. “If only I can have Christ and be given a place in him!” Can you hear Paul’s corporate understanding in phrases like that?

The addict, or sinner, does not actually enjoy the world as much as he or she is enslaved to it, in Paul’s understanding. Jesus had come to offer us a true alternative social order here and not just a “way to heaven” later. 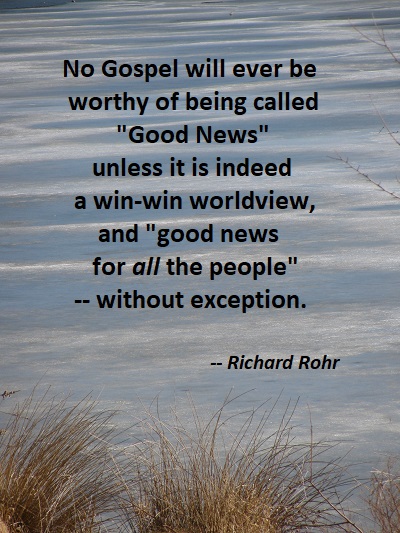 As long as you operate inside any scarcity model, there will never be enough God or grace to go around. Jesus came to undo our notions of scarcity and tip us over into a worldview of absolute abundance — or what he would call the “Kingdom of God.” The Gospel reveals a divine world of infinity, a worldview of enough and more than enough. Our word for this undeserved abundance is “grace”: “Give and there will be gifts for you: full measure, pressed down, shaken together, and running over, and poured into your lap” (Luke 6:38). It is a major mental and heart conversion to move from a scarcity model to an abundance model.

No Gospel will ever be worthy of being called “Good News” unless it is indeed a win-win worldview, and “good news for all the people” (Luke 2:10) — without exception. The right to decide who is in, and who is out, is not one that our little minds and hearts can even imagine. Jesus’s major theme of the Reign of God is saying, “Only God can do such infinite imagining, so trust the Divine Mind.”