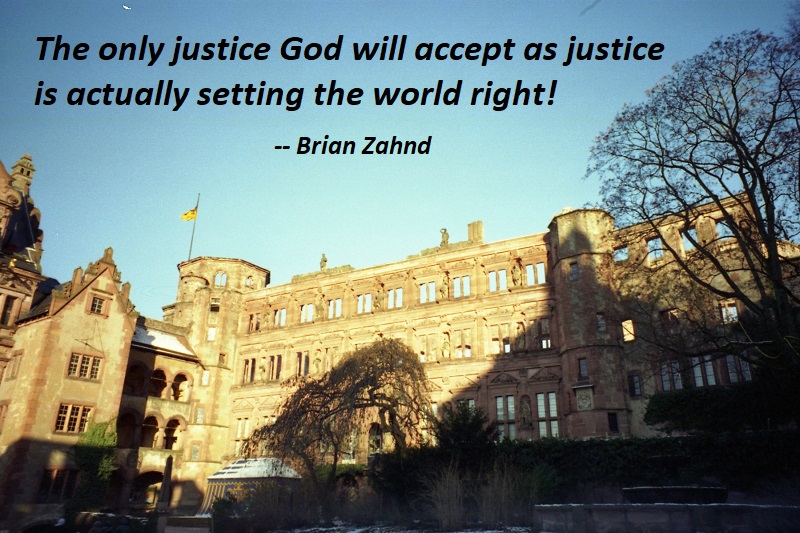 God is not beholden to retributive justice. We are the ones who demand sacrificial victims, not God. We are the ones who insist upon a brutal logic that says God can’t just forgive. We are the ones who mindlessly say, “God can’t forgive; he has to satisfy justice.” But this is ridiculous. It’s a projection of our own pettiness upon the grandeur of God. Of course God can forgive! That’s what forgiveness is! Forgiveness is not receiving payment for a debt; forgiveness is the gracious cancellation of a debt. There is no payment in forgiveness. Forgiveness is grace. God’s justice is not reprisal. The justice of God is not an abstract concept where somehow sin can only be forgiven if an innocent victim suffers a severe enough penalty. In the final analysis punitive justice is not justice at all; it’s merely retribution. The only justice God will accept as justice is actually setting the world right! Justice is not the punishment of a surrogate whipping boy. That’s injustice!

In the parable of the prodigal son, the father doesn’t rush to the servants’ quarters to beat a whipping boy and vent his anger before he can forgive his son. Yet Calvin’s theory of the cross would require this ugly insertion into Jesus’s most beautiful parable. No, in the story of the prodigal son, the father bears the loss and forgives his son from his treasury of inexhaustible love. He just forgives. There is no payment. Justice as punishment is what the older brother called justice. The only wrath we find in the parable belongs to the Pharisee-like older brother, not the God-like father. Justice as the restoration of relationship is what the father called justice.