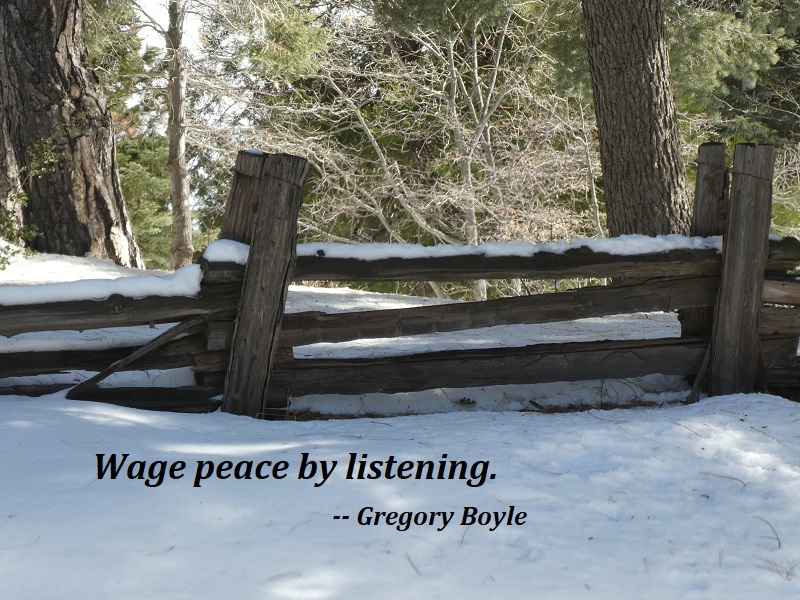 Fortunately for everyone, the solution has nothing to do with talking. Often enough we ask ourselves: How do we bridge the distance between “direct service” and “structural change”? I have learned that it’s never about “saying” very much at all but, rather, receiving, listening, and valuing people until they come out with their hands up — feeling, for perhaps the first time, valuable. Receiving them and allowing yourself to be reached by them is all that’s asked of us. And anyone who is the proud owner of a pulse can do this. Wage peace by listening. 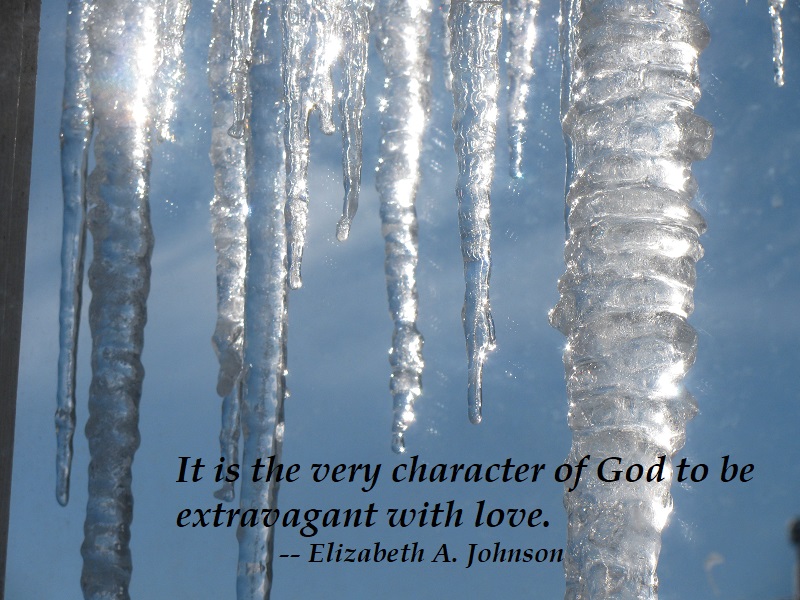 The scroll of this prophet [Second Isaiah] is a magnificent mother lode of insight into the liberating, merciful God who saves, not because anyone deserves this or pays something to placate an offended deity, but because it is the very character of God to be extravagant with love. 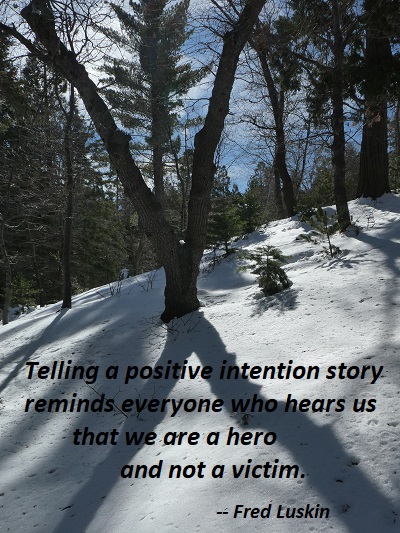 You will discover as you tell your positive intention story that you feel better. One reason is that you are closer to telling a balanced story. This is because each of us has many experiences. Negative ones are not more important than positive ones. A grievance freezes a hurtful experience into an unchangeable solid. Then it rents too much space in our mind and leads to feelings of helplessness. The truth is that wounds hurt, but they do not have to be crippling.

Each of us can forgive those who have hurt us. When we put our grievances into the perspective of challenges to our goals, we are giving an accurate account. Everything that hurts us is a challenge to our happiness. It is a challenge to be happy in this world. Wounds can cripple the happiness only of those who do not know how to cope and forgive. Finding our positive intention helps us connect with the big picture. Telling a positive intention story reminds everyone who hears us that we are a hero and not a victim. We deserve the best, and forgiveness helps us find it.

Jesus was always too busy being faithful to worry about success. I’m not opposed to success; I just think we should accept it only if it is a by-product of our fidelity. If our primary concern is results, we will choose to work only with those who give us good ones. 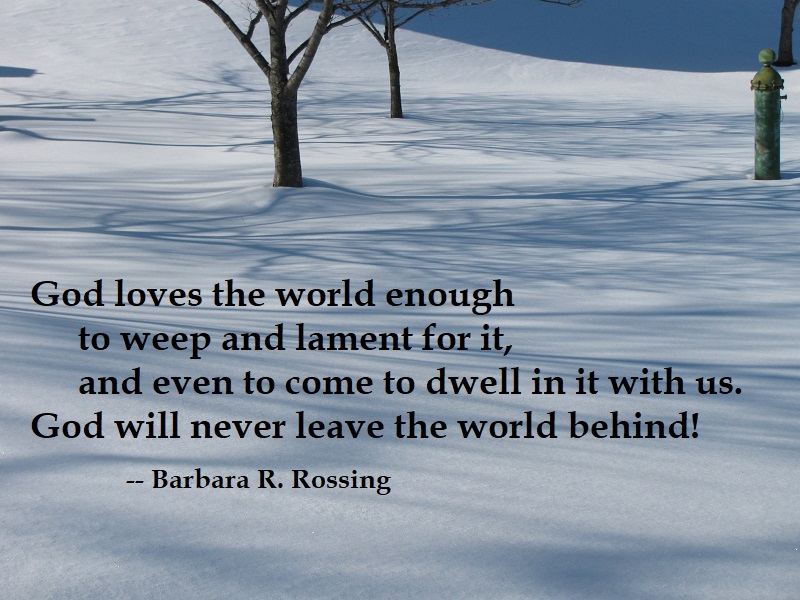 But “woe” is not really a helpful translation for the Greek word. Its sense is rather one of lament — like a mourner keening in grief, wailing out repeated cries of “Oh, oh, oh” at the death of a loved one. Spanish Bibles simply translate the sound as “Ay, ay, ay.” I would translate the word as, “Alas.” The meaning of the Greek word ouai is first of all a cry of pain, like the word “ouch” in English. It can mean “woe,” but it can also express deep lamentation or mourning, as in the laments of the merchants and kings over Rome in chapter 18, “Alas, Alas, Alas, for the great city!” — the same Greek word ouai.

It is as if God is crying “ouch” or “alas” on behalf of the suffering world: “Alas for the inhabitants of the earth.” It is a subtle but significant shift in direction because “Alas” conveys God’s sympathy in a way that “woe” does not.

This is important because dispensationalists use Revelation’s “woe” verses to argue that God has consigned the world to cataclysmic destruction. Their arguments contradict the overall message of Revelation. In the tradition of the Exodus story and the Exodus plagues, Revelation makes clear that God sympathizes, grieves, and laments over the world’s pain, even while threatening plagues to bring about the world’s liberation from injustice.

As we ponder the message of Revelation, especially its difficult middle sections, we must remember the overarching promise that God still loves the world and cries out for its liberation. In the slain Lamb Jesus, God shares our cries and comes to deliver us. God does not curse the world. God loves the world enough to weep and lament for it, and even to come to dwell in it with us. God will never leave the world behind! 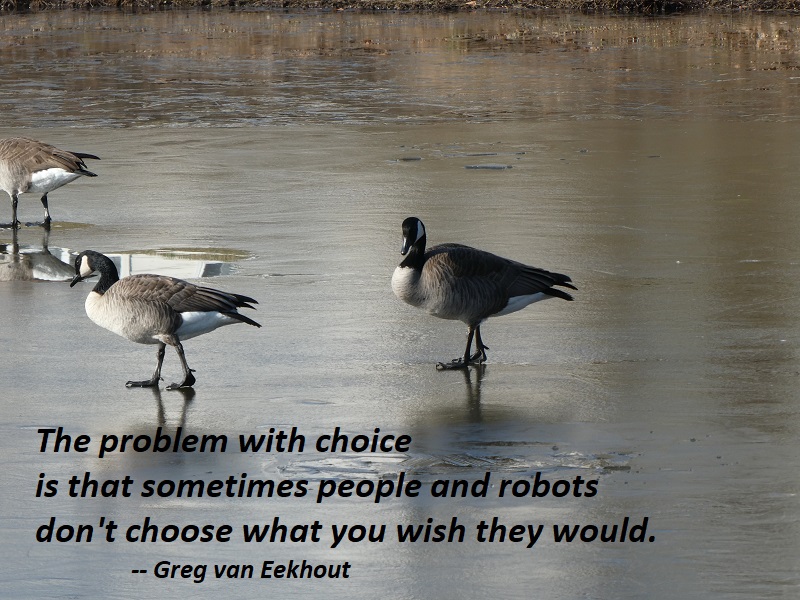 The problem with choice is that sometimes people and robots don’t choose what you wish they would. 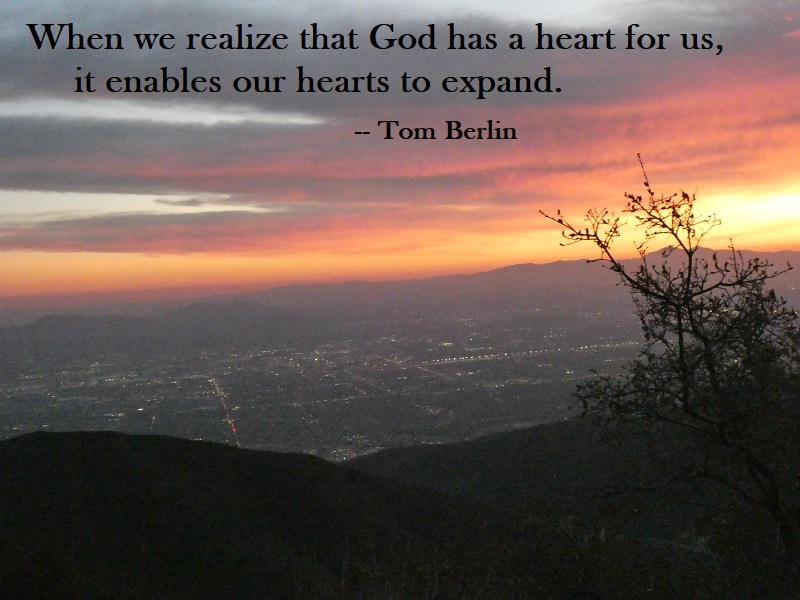 Jesus called Simon to join him as he was. He did not make him confess his sins, get a higher SAT score, or improve his resume for a few years and reapply. Jesus knew he could expand Simon’s capacity to love by offering him grace. When we realize that God has a heart for us, it enables our hearts to expand. That experience may be what allowed Simon to put his shame or his guilt in perspective. It may be why Jesus later changed Simon’s name to Peter, to focus his attention on his strengths and future rather than on his past.