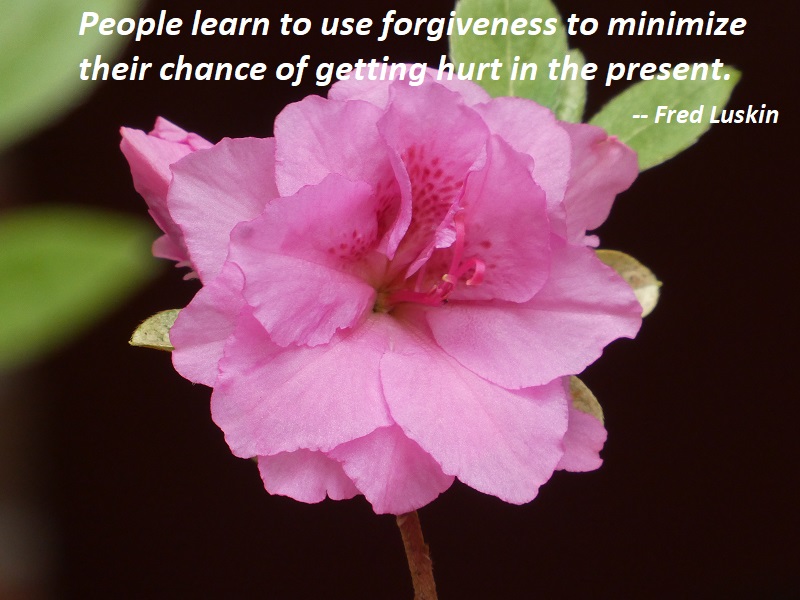 Learning to forgive can be more than just a way to resolve past hurts and grievances. People learn to use forgiveness to minimize their chance of getting hurt in the present as well as limit the amount of time they remain hurt from the past. 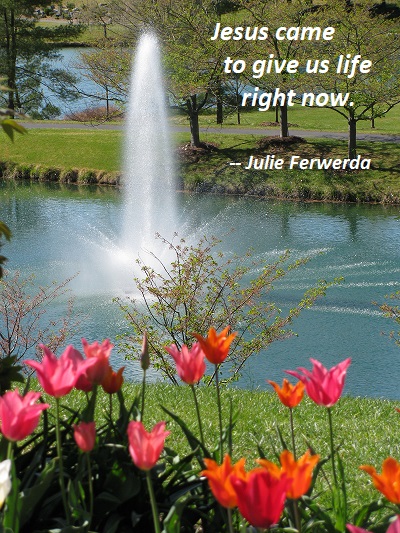 Here is what they are missing; “eonian life” is not eternal life. It means coming into life (relationship with Jesus) in the age that the Bible writer is referring to and continuing through the remaining ages. In any age you live that you are connected to Jesus — the life source or “Vine” — you are enjoying life in that age. For instance, as a believer in Christ, I am currently enjoying life pertaining to this age. When the next age arrives, perhaps the seventh age of the “Wedding Feast” or “Sabbath Rest,” I will no longer be enjoying life in this age, but then it will be life pertaining to that age. Eonian life, then, is not so much about a time that begins after we die, but more about a quality and vitality of life right now, lived in fellowship with God through His Son….

There are many more such verses you can look up, correcting them with eonian life and the proper verb tense to experience the greater truth that Jesus came to give us life right now — not just later — and that people’s lives are markedly improved when they believe, understand, and live the true Gospel message. 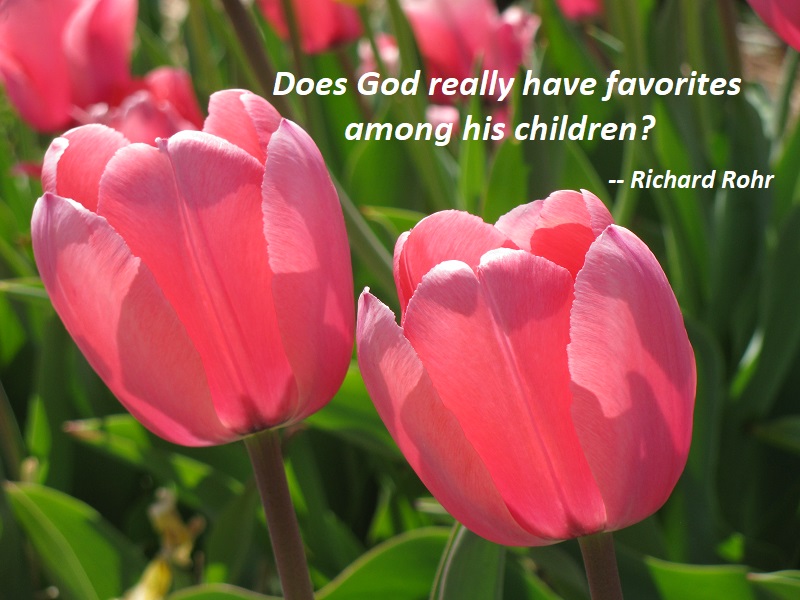 We must be honest and humble about this: Many people of other faiths, like Sufi masters, Jewish prophets, many philosophers, and Hindu mystics, have lived in light of the Divine encounter better than many Christians. And why would a God worthy of the name God not care about all of the children? (Read Wisdom 11:23-12:2 for a humdinger of a Scripture in this regard.) Does God really have favorites among his children? What an unhappy family that would create — and indeed it has created. Our complete and happy inclusion of the Jewish scriptures inside of the Christian canon ought to have served as a structural and definitive statement about Christianity’s movement toward radical inclusivity. How did we miss that? No other religion does that. 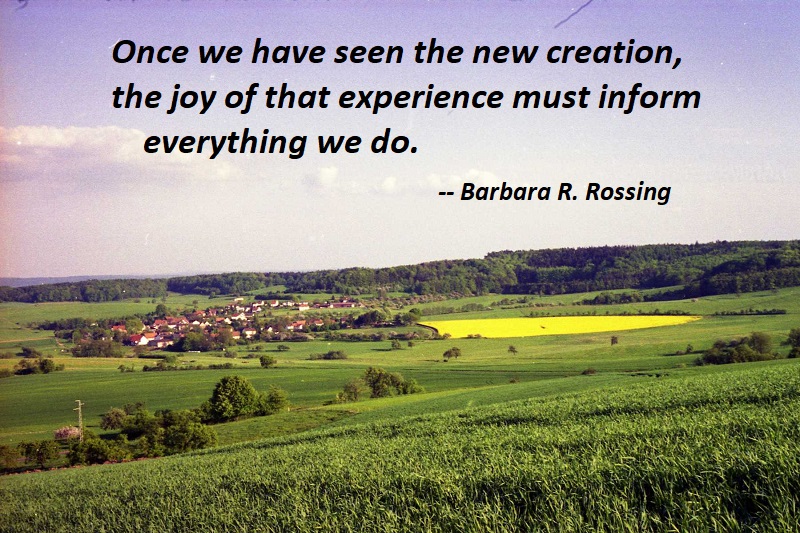 God’s beloved city in Revelation 21-22 is not primarily a vision for after we die, or for after Jesus returns. It is rather a vision that can transform the way we live out God’s reign in the world today. It is a vision of the healing leaves that God wants to lay on every broken heart, on every war-torn landscape. It is a vision of Lamb power in the world. And we are part of that vision. Once we have seen the new creation, the joy of that experience must inform everything we do. 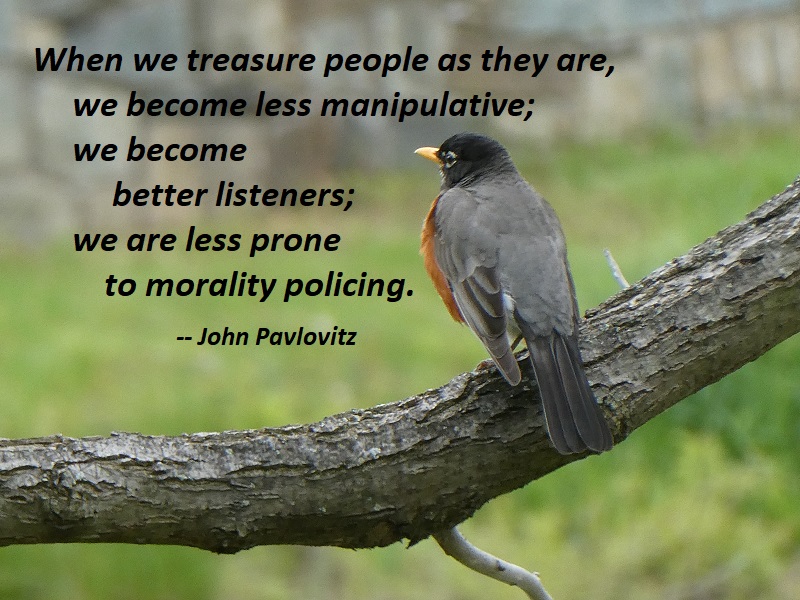 As we who already comprise the Church recalibrate our hearts for a different purpose, we are beautifully altered too. When we treasure people as they are, we become less manipulative; we become better listeners; we are less prone to morality policing. Agenda-free community allows messiness and failure and regression in ways that are so rarely tolerated in the traditional church. Again, this is the table Christ sets over and over in the Scriptures: the place of continual restoration, perennial communion, unending fellowship. You don’t earn a spot there; you don’t fail and then find yourselves outside of it. Just ask Peter. He was one of Jesus’ original twelve disciples, the one who publicly boasted of his faithfulness to his teacher, even if it meant his own death. It would be this same Peter who would soon stand in the public square following Jesus’ arrest, denying three times that he even knew him. And the Gospel writer John describes this same Peter weeks later, standing on the shoreline, being forgiven three times by a resurrected Jesus, as a symbolic wiping away of his failure following a restorative waterside meal hosted by his teacher (John 21:15-22). This is the table Jesus sets. It is the table of second chances, and two hundredth chances, the table of grace. There you don’t ever lose your place, and you are never “finished.”

At the table, Jesus had wisdom to share, hard words to give, and purpose to call people to, but more than that he had their humanity to affirm. He allowed them the dignity of being seen and heard and known. Imagine what it would look like if we oriented ourselves around that pursuit, if we had no other agenda than walking alongside people sharing the view of God from where we stand, not needing them to see what we see, or believe what we believe, but to encounter Jesus in our very flesh. 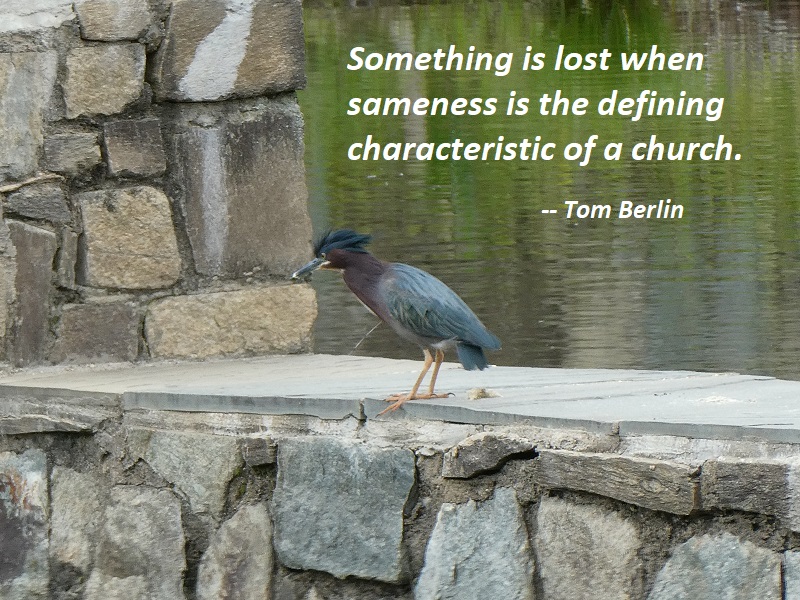 One look at the group Jesus first assembled as his followers tells us that something is lost when sameness is the defining characteristic of a church. Jesus’ example teaches us that something is wrong when we leave out people who differ from us and only feel at home when everyone is the same. His goal is not to make us more of what we are, but help us to become what we can be. That requires us to expand our understanding of what it means to love our neighbor. Christ shows us that the only way to learn the greatest commandment is to have people in our lives who we personally find so difficult to love that we have to get up every morning and pray to our Creator for a love we could not produce on our own. The first disciples had to ask God to expand their hearts so they could overlook the past sins of the tax collector, put up with the ideological torpedo the zealot launched at breakfast, ignore the angry brothers’ latest argument, or figure out if it was time to confront the group treasurer they were beginning to think was embezzling funds. 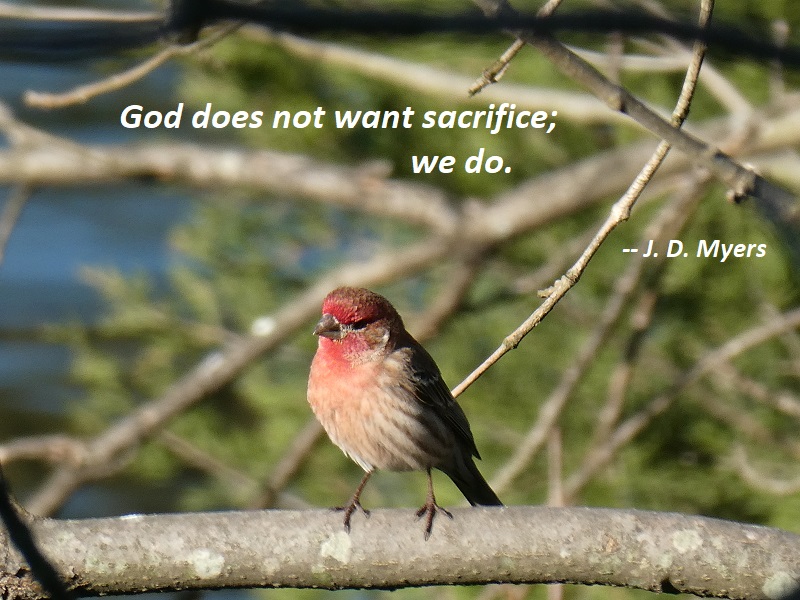 The true point of the text is summarized in Hebrews 10:5-10. The truth is stated twice that God never wanted or desired sacrifices, nor did He take any pleasure in them. Instead, what God wanted was someone who would do His will. Jesus perfectly obeyed God’s will, which made Jesus the perfect living sacrifice. Yet Jesus did die. He died a sacrificial death. Through His death, He shed His blood for the sins of all mankind. The Bible clearly reveals this truth, as does the book of Hebrews. But the question is Why? Why did Jesus die? Why did Jesus shed His blood? Why did the shed blood of Jesus accomplish what bulls and goats never could?

The author of Hebrews has the answer. Jesus did not die because God required or needed sacrifice. He died to take away and bring an end to sacrifice. Jesus did this by revealing through His own sacrifice at the hands of men that God does not want sacrifice; we do. People sacrifice to God, even though God didn’t want such sacrifices. We sacrificed to God because we wanted sacrifice, and because sacrifice seemed to bring peace into our lives and communities. But when Jesus died and rose from the dead, He revealed that God does not want sacrifices, but instead wants people to live their lives in faithful obedience to Him, as He told Saul so long ago, “To obey is better than sacrifice” (1 Sam 15:22). Living in a relationship with God is what God has always wanted (cf. Heb 10:16). The sacrifices of the Mosaic Law were given as a substitute for relationship, but now that we have seen from Scripture and through Jesus that God never wanted or desired sacrifices, but only wanted us to live in a loving relationship with Him and each other, we can put away all sacrifices and live as God desires. Best of all, this is the only true way to find the peace we all seek. When we generously love and freely forgive as God has done for us, we then find peace with God and with one another. 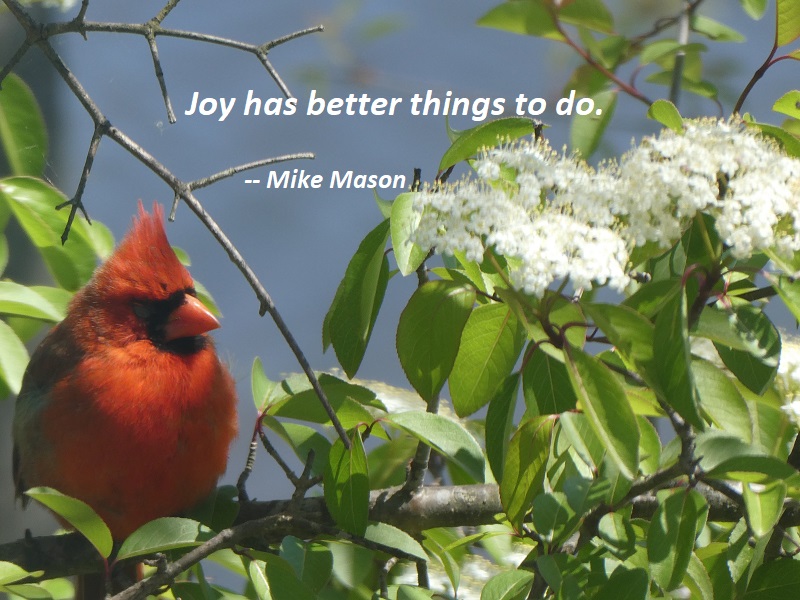 Remembering and retaining joy takes work, which is why the New Testament continually exhorts us to “hold on to the good” (1 Thessalonians 5:21). People must hold on to something. If I don’t hold the good, then I’ll hold the bad and stay stuck in problems. My experiment taught me to feel differently about problems. Where before I’d experienced them as maddeningly engrossing, now they became like old flames with whom I long ago fell out of love. They didn’t have the power to entice me as before. In the light of my happy marriage to joy, it was easier to throw them off. Chronic problems have a way of going round and round on a hamster wheel, and a joyful person loses interest in this. Joy has better things to do. 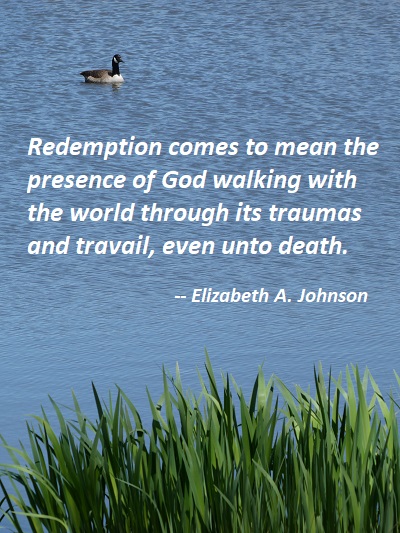 It beggars belief to think that this Jewish prophet who announced and enacted the joyful reign of the gracious and merciful God of Israel decided to go to Jerusalem to die in order to pay back the debt sinners owed to the offended honor of God, who could not forgive sin without the death of an innocent man. Not in your wildest dreams….

What our trek through the scriptures gives us instead, to use alternative language, is a theology of accompaniment. It fosters the idea of salvation as the divine gift of “I am with you,” even in the throes of suffering and death. Redemption comes to mean the presence of God walking with the world through its traumas and travail, even unto death. 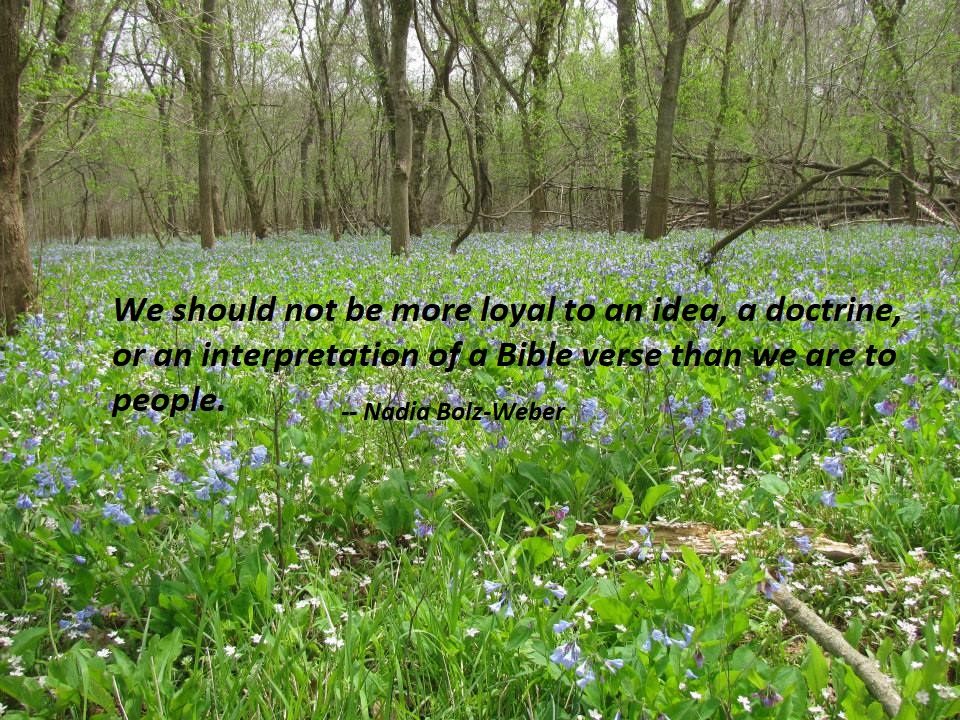 It doesn’t feel very difficult to draw a direct line between the messages many of us received from the church and the harm we’ve experienced in our bodies and spirits as a result. So my argument in this book is this: we should not be more loyal to an idea, a doctrine, or an interpretation of a Bible verse than we are to people. If the teachings of the church are harming the bodies and spirits of people, we should rethink those teachings.