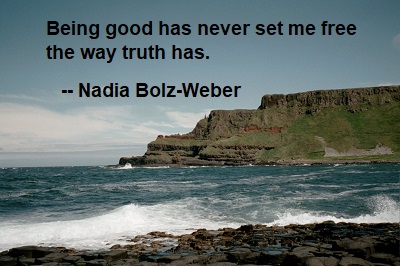 There’s a popular misconception that religion, Christianity specifically, is about knowing the difference between good and evil so that we can choose the good. But being good has never set me free the way truth has. Knowing all of this makes me love and hate Jesus at the same time. Because, when instead of contrasting good and evil, he contrasted truth and evil, I have to think about all the times I’ve substituted being good (or appearing to be good) for truth.

Very often I will avoid the truth until my face goes red like a toddler avoiding her nap; until limp limbed, she finally stops flailing and falls asleep and receives rest — the very thing she needs and the very thing she fights. When someone like me, who will go to superhero lengths to avoid the truth, runs out of options — when I am found out or too exhausted to pretend anymore or maybe just confronted by my sister — it feels like the truth might crush me. And that is right. The truth does crush us, but the instant it crushes us, it somehow puts us back together into something honest. It’s death and resurrection every time it happens.

I once heard someone say that my belief in Jesus makes them suspect that I intellectually suck my thumb at night. But I cannot pretend, as much as sometimes I would like to, that I have not throughout my life experienced the redeeming, destabilizing love of a surprising God. Even when my mind protests, I still can’t deny my experiences. This thing is real to me. Sometimes I experience God when someone speaks the truth to me, sometimes in the moments when I admit I am wrong, sometimes in the loving of someone unlovable, sometimes in reconciliation that feels like it comes from somewhere outside of myself, but almost always when I experience God it comes in the form of some kind of death and resurrection.

All this is to say that if you find yourself agreeing with my interpretations, don’t assume traditionalists are thick-headed or hard-hearted for not seeing what we see. On the other hand, if you find yourself disagreeing with my interpretations, don’t assume that your viewpoint is unquestionably the “real biblical position.” Christians have been reading the same Bible and holding greatly different beliefs for over two thousand years now. Awareness of this historical fact alone should make us quick to listen to others, and slow to assume our position is the obviously right one. It should also give us pause before accusing someone of denying biblical authority just because they question the legitimacy of our interpretations. In other words, in questioning hell we are not throwing away the biblical puzzle pieces we do not like, we are simply questioning if the picture on the lid that we have received from the dominant tradition actually gives us the best way to put all the pieces together. Perhaps there is a better picture that can make room for more of the pieces to fit together better. At this point we need to acknowledge that people who disagree with our own biblical interpretations are not necessarily denying the Bible, but simply questioning the lenses through which we currently see the Bible.

But with Job easy answers are not possible. Implicit in the book is the lesson that theology must not try to be any clearer about God than God is about Himself. This is where so much fundamentalist religion goes astray, as it seeks to pin things down that are unpinnable, to systematize truths that by nature are unsystematic. Pharisees theologize the life out of truth. They are so wrapped up in expounding the Word of God that they forget it is the Word of God which expounds us.

True art has a mythic quality in that it speaks of that which was true, is true, and will be true.

“You shall love the Lord your God with all your heart.” If we are angry at God because of something that happened to us or because of something going on in the world, and we are reluctant to admit our anger either because it seems disrespectful or because we fear that God will punish us for being angry at Him, we won’t be able to “love God with all our heart.” We can only love him halfheartedly. The wife who is afraid to tell her husband how bothered she is by some of his habits, for fear that he will be upset with her and perhaps even leave her, will not be able to love him wholeheartedly, and that inability will affect their relationship. The adolescent who is scolded for being angry at his parents “after all we’ve done for you,” or whose hopes and dreams are mocked by his parents, will learn to keep his feelings to himself. That will be an impediment to his being able to love his parents as wholeheartedly as he would like to.

Accepting anger, ours and that of people close to us, has to be part of any honest relationship. If the opposite of faith is not doubt but despair, then the opposite of authentic love, wholehearted love, is not anger but pretense, censoring our feelings. I don’t believe God is fooled by that, nor do I believe that is what He wants from us. God will accept our anger, justified or not, so that we can then go on to love Him “with all our heart, with all our soul, with all our might.”

It is true that Jesus came, in delivering us from our sins, to deliver us also from the painful consequences of our sins. But these consequences exist by the one law of the universe, the true will of God. When that will is broken, suffering is inevitable.

But in the perfection of God’s creation, the result of that suffering is curative. The pain works toward the healing of the breach.

The Lord never came to deliver men from the consequences of their sins while those sins yet remained. That would be to cast out the window the medicine of cure while still the man lay sick. Yet, feeling nothing of the dread hatefulness of their sin, men have constantly taken this word that the Lord came to deliver us from our sins to mean that he came to save them from the punishment of their sins.

This idea has terribly corrupted the preaching of the Gospel. The message of the Good News has not been truly communicated. Unable to believe in the forgiveness of their Father in heaven, imagining him not at liberty to forgive, or incapable of forgiving forthright; not really believing him God who is fully our Savior, but a God bound — either in his own nature or by a law above him and compulsory upon him — to exact some recompense or satisfaction for sin, a multitude of religious teachers have taught their fellow men that Jesus came to bear our punishment and save us from hell. But in that they have misrepresented his true mission.

No man is safe from hell until he is free from his sin. But a man to whom his sins are a burden, while he may indeed sometimes feel as if he were in hell, will soon have forgotten that he ever had any other hell to think of than that of his sinful condition. For to him his sin is hell. He would go to the other hell to be free of it. Free of his sin, hell itself would be endurable to him.

For hell is God’s and not the Devil’s. Hell is on the side of God and man, to free the child of God from the corruption of death. Not one soul will ever be redeemed from hell but by being saved from his sin, from the evil in him. If hell be needful to save him, hell will blaze, and the worm will writhe and bite, until he takes refuge in the will of the Father. “Salvation from hell” is salvation as conceived by such to whom hell, and not the evil of the sin, is the terror.

— George MacDonald, The Hope of the Gospel, “Salvation From Sin,” quoted in Discovering the Character of God, edited by Michael Phillips, p. 39-40.

We have not yet come to consider the fact that the very best of men said he knew God, that God was like himself, only greater, that whoever would do what he told him should know God and know that he spoke the truth about God, that he had come from God to tell the world that God was truth and love.

Humility is about refusing to get all tangled up with yourself. It’s about surrender, receptivity, awareness, simplicity. Breathing in. Breathing out.