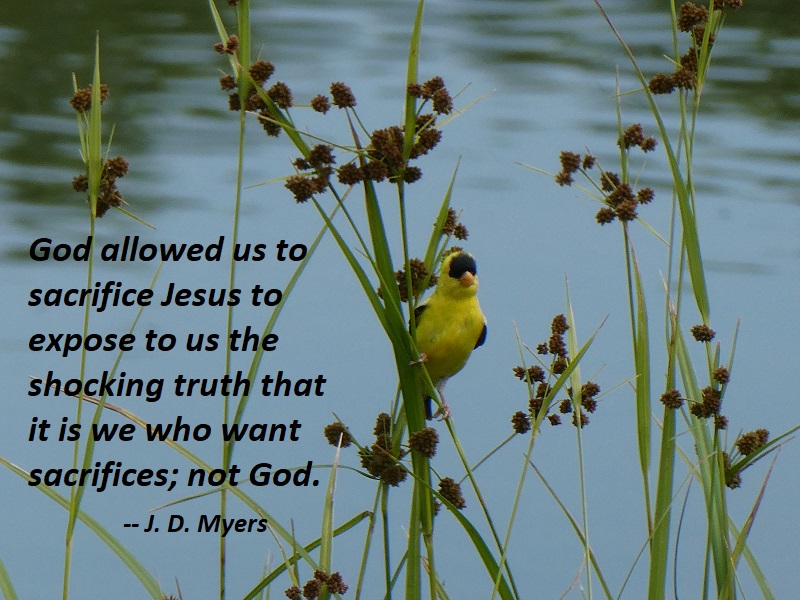 God allowed us to sacrifice Jesus to expose to us the shocking truth that it is we who want sacrifices; not God.

Paul’s overall point is that God has never violently lashed out in the past when we humans committed sin. Instead, God has always overlooked and forgiven such sins simply because that is what a forgiving and righteous God does. So also, in the present time, God forgave and overlooked the greatest sin of all, the sin of murdering Jesus. Yes, it was necessary for Jesus to face a violent death on the cross, but this was so that Jesus would be the perfect revelation of God’s righteous forgiveness. The fact that God forgives humanity for the terrible sin of killing Jesus proves that God always forgives. In this way, God is proven to be both just and the justifier of those who believe in Jesus.

The reason Paul makes this argument is because many people in his day (as in ours) believed that God was a God of vengeance and retaliation. But God’s revelation in Jesus Christ showed that He is not violent or vengeful. Instead, He is forgiving and righteous. To prove this, God let us kill His own Son, Jesus, in His name, as a “scapegoat sacrifice” (thinking that by killing Him, we were propitiating God and appeasing His wrath toward sinners), and then instead of revenge or retaliation He offers forgiveness. If God was really as we thought Him to be, then He would have destroyed humanity in anger and violence for wrongfully accusing and killing His own Son. But God did not do this. Instead, He simply forgave. Why? Because this is how God always behaves toward sin. He is righteous, and His righteousness is demonstrated through His free forgiveness of the worst of human sin. This is Paul’s point in Romans 3:20-26.