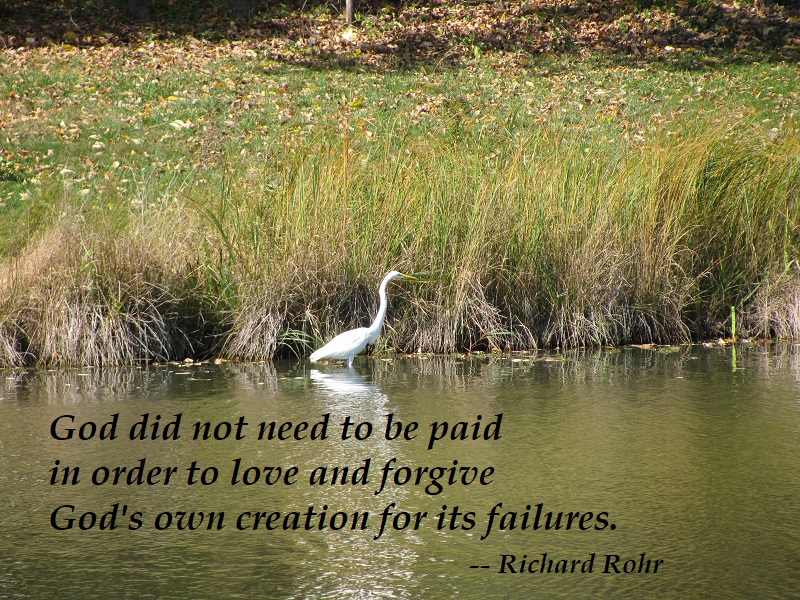 The Franciscans, however, led by John Duns Scotus (1266-1308), refused to see the Incarnation, and its final denouement on the cross, as a mere reaction to sin. Instead, they claimed that the cross was a freely chosen revelation of Total Love on God’s part. In so doing, they reversed the engines of almost all world religion up to that point, which assumed we had to spill blood to get to a distant and demanding God. On the cross, the Franciscan school believed, God was “spilling blood” to reach out to us! This is a sea change in consciousness. The cross, instead of being a transaction, was seen as a dramatic demonstration of God’s outpouring love, meant to utterly shock the heart and turn it back toward trust and love of the Creator.

In the Franciscan school, God did not need to be paid in order to love and forgive God’s own creation for its failures. Love cannot be bought by some “necessary sacrifice”; if it could, it would not and could not work its transformative effects. Try loving your spouse or children that way, and see where it gets you. Scotus and his followers were committed to protecting the absolute freedom and love of God. If forgiveness needs to be bought or paid for, then it is not authentic forgiveness at all, which must be a free letting go.