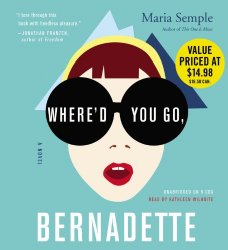 Bee is trying to find her mother. Bernadette Fox has disappeared. Bee assembles various documents leading up to the disappearance to try to figure out what happened, and where her mother went.

Bernadette has been uptight for a long time, and has not been enjoying Seattle. What drove her over the edge? Was it the dispute with her neighbor over blackberry bushes? Was it stress about traveling to Antarctica to please their daughter and having to face the treacherous Drake Passage? Was the parents’ group at her daughter’s private school too much for her? Was it her husband’s long hours at Microsoft? Was it simply from trying to avoid interaction with people by using an internet assistant? Did she get wind of her husband’s plans to stage an intervention? Or is it nothing more than hatred of Idaho drivers?

The incidents happening around Bernadette were quirky enough to be humorous – at first. Toward the latter half, I began to think they were all simply too awful and couldn’t be overcome. A lot of little things had snowballed into big things, and let’s just say I was fully sympathetic with her for disappearing.

However, did she mean to disappear? Was she even still alive? And can Bee find her?

By the end of this book, I liked it tremendously. There were some fairly messy loose ends, but just enough to make the whole thing realistic. Bottom line, this book tells the story of a creative family who loves one another in extraordinary circumstances. And they found a realistic and hopeful, but extraordinary, way to get back from the edge of the cliff. The reader finishes with a belief that, one thing or another, they’re going to make it.

And getting there is quite a ride.

Find this review on Sonderbooks at: www.sonderbooks.com/Fiction/whered_you_go_bernadette.html

Leave a Reply to Saints and Spinners Cancel reply