Huzzah, huzzah! A Conspiracy of Kings has won the Undead Poll! So even though it lost in the first round of School Library Journal’s Battle of the Kids’ Books, it gets to compete in the Final Round.

I’m not at all surprised. Those who “get” the Queen’s Thief series by Megan Whalen Turner, those who like that sort of book at all, are enthusiastic, not to say rabid, fans. Each book is a masterpiece of plotting, and the characters are realistically flawed but incredibly awesome, and show real growth. If you like that sort of book at all, Megan Whalen Turner’s books are among the very best.

Just yesterday, I finished my third reading of A Conspiracy of Kings, this time on audio, and I noticed yet more ways she builds the plotting. Megan Whalen Turner has said that she feels she’s failed if her readers don’t reread the book, and that she writes it to be a different experience on each rereading. I have said more than once that her books get better on each rereading, and it’s so true. On this rereading, I saw all the more clearly how strongly and believably Sophos’ character growth is built. By the end of the book, he is a true king.

Like they said on Sounis, any time it looks like Gen has lost, he is secretly plotting his victory! Though, yes, this book is more about Sophos, he has definitely learned from Eugenides, and he DOES have Gen behind him, helping plot his victory.

From the start, I was worried that Richard Peck wouldn’t be enough of a fantasy fan to pick A Conspiracy of Kings. However, now it turns out that all three books in the Big Kahuna Round are fantasy books, so that will be less of an issue.

Keeper is a much more gentle, slower-moving fantasy, rooted in real life, about love and belonging and good things like that. It could win if that is what the judge prefers or strikes him most in the reading.

The time is getting away from me. There are only a few days left for me to encourage my readers to vote in the Undead Poll for this year’s School Library Journal Battle of the Books! (*cough* A Conspiracy of Kings! *cough*)

The Battle of the Kid’s Books is a once a year tournament between 16 outstanding children’s and young adult books from the previous year. What makes it incredible fun to follow is that the judges are celebrity authors. There’s no criteria pre-assigned for judging, so the judges just pick their favorites. But the fun is when these highly gifted authors explain what they liked about two outstanding books. And there’s plenty of drama in wondering if your favorite will win.

Another fun aspect of the Battle of the Books is the Undead Poll. Before things begin, readers are given a chance to vote for their favorite book. The book with the most votes will come back from the “dead” and compete in the final round. If that book has not been killed off yet, then it will go to the next book, and so on.

Another fun way to participate is to predict the winners at Eric Carpenter’s blog. Last year, I failed abysmally, with only one of my first-round picks going on to the next round. Last year, judges seemed to pick the book least like the ones they write. This year, I think I will just root for the books I would pick if I were judging, and not try to predict what the judges will do.

Now, last year I did want Fire, by Kristin Cashore to win. This year, I definitely want the winner to be A Conspiracy of Kings, by Megan Whalen Turner, because that series is up there with my all-time favorite books. Since Megan Whalen Turner has a fan site on LiveJournal, I’m hoping the people of Sounis/Attolia will have voted her in the Undead Poll, just in case one of the judges does not appreciate the books utter brilliance.

If Conspiracy does make it to the Big Kahuna Round, I hope that One Crazy Summer, by Rita Williams-Garcia is the next in the Undead Poll. Because I wish it had won the Newbery Medal instead of “just” a Newbery Honor (and the Coretta Scott King Author Medal and the Scott O’Dell Award for Historical Fiction and a National Book Award Finalist).

Okay, below are the first-round match-ups and my comments:

1. As Easy As Falling Off the Face of the Earth, by Lynne Rae Perkins
vs. The Cardturner, by Louis Sachar
judged by Francisco X. Stork

2. A Conspiracy of Kings, by Megan Whalen Turner
vs. Countdown, by Deborah Wiles
judged by Dana Reinhardt

I think you already know which one of these I want to win! I have read both books, and while I liked Countdown, the “documentary novel” approach really didn’t work for me. There were a few places where there were reports about people that revealed what happened later, and that really pulled me right out of the story. I wasn’t sure if those were supposed to be school reports, but if so, they should have been written as a child would have written them in the time of the story. The other material was interesting, but it also tended to make me less in the thread of the story, which was a good story.

And Conspiracy of Kings? Well, like all Megan Whalen Turner’s books, I enjoy and appreciate it more on each rereading. I’ve read it twice already, and just discovered that the library has the audiobook version, so that’s my next audiobook to listen to. It has absolutely brilliant plotting, and we see real growth in Sophos as he discovers what it means to be a king.

3. The Dreamer, by Pam Munoz Ryan, illustrated by Peter Sis
vs. The Good, the Bad, and the Barbie, by Tanya Lee Stone
judged by Barry Lyga

Okay, will all the other children’s literature folks despise me if I confess that I usually like Fiction a lot better than Nonfiction? Though I’m also influenced here because I thought that The Dreamer is a true work of art. The story is told poetically, with lines from Pablo Neruda’s poetry woven throughout, and the illustrations perfectly set the mood. I think the book is far more moving than a straight nonfiction account of the poet’s childhood would have been. I have looked at The Good, the Bad, and the Barbie, and while I think it’s a worthy inclusion in this contest and a well-done look at the history of the Barbie doll, I’m too big a fan of The Dreamer to want it to win.

4. Hereville: How Mirka Got Her Sword, by Barry Deutsch
vs. Keeper, by Kathi Appelt
judged by Susan Patron

This one is a toughie. Both of these books are beautiful and slightly quirky, with a little girl involved in something with a touch of magic. Both were completely delightful. (I’ve read both, but haven’t reviewed them yet.)

I think I’m going to pick Hereville. Now, that might be because it’s the one I read most recently, so the delight it brought is still fresh in my mind. I simply can’t resist it’s tagline: “Yet Another Troll-Fighting 11-Year-Old Orthodox Jewish Girl.”

5. The Odyssey (graphic novel), by Gareth Hinds
vs. One Crazy Summer, by Rita Williams-Garcia
judged by Karen Hesse

I haven’t read this version of The Odyssey, though I hear it’s exceptional. But I loved One Crazy Summer far too much to possibly root against it. (With the ONE exception of A Conspiracy of Kings.) I hope that this being similar to books that Karen Hesse writes will not work against it, but that she’ll appreciate a historical novel with poetry included.

6. The Ring of Solomon, by Jonathan Stroud
vs. Sugar Changed the World, by Marc Aronson and Marina Budhos
judged by Adam Rex

Again, I’ve read both of these but haven’t reviewed them yet, and they are both completely brilliant. If I were going to root for any nonfiction book, Sugar is the one I’d pick. It’s a well-written, fascinating look at the history of humans and sugar. It shows that sugar did, in fact, change the world.

However, The Ring of Solomon is simply too good. An intricate plot, a wildly imaginative story, and lots of humor make it my pick for this round. In fact, I recently read a short story by Adam Rex in the Guys Read: Funny Business anthology, and the humor is very similar to the humor in The Ring of Solomon, so I suspect that’s what he’ll pick.

7. A Tale Dark and Grimm, by Adam Gidwitz
vs. They Called Themselves the KKK, by Susan Campbell Bartoletti
judged by R. L. Stine

I haven’t read either of these, though I have checked them both out and looked them over. It is probably telling that I intend to read A Tale Dark and Grimm very soon, but I turned They Called Themselves the KKK back in to the library. I hear it’s a well-written book, and I’m definitely in favor of children reading about the terrorist group and understanding that ugly part of our history — but I didn’t feel like finding out details about the KKK myself.

Anyway, A Tale Dark and Grimm looks like it will be a book I will thoroughly enjoy. It certainly takes an imaginative approach. I’m going to root for it. I’ll let you know if that changes after I actually read it.

Okay, I’m going to be lazy with this one. I haven’t read Trash, and I probably won’t, unless Mitali Perkins and any later judges make it sound very compelling. It looks to be yet another dystopian novel, and I’m getting a little tired of them, so I wasn’t in the mood to read this one and turned it back in. On the other hand, I enjoyed Will Grayson, Will Grayson, so I’m going to guess that Mitali will pick the more upbeat book. Yes, the Will Graysons have some trouble, but there’s plenty of humor and the ending is definitely feel-good.

So there you have it! Vote in the Undead Poll for your favorite by March 6. The Opening Ceremony will be on March 8, and the First Round will begin on March 14. It’s sure to be a lot of fun!

Here I am with the t-shirt I got for blogging about last year’s Battle of the Books: 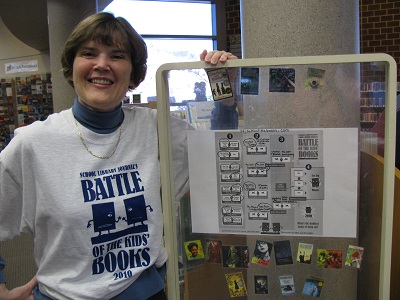 Laurie Halse Anderson wrote an incredible book, Speak, about a girl so traumatized about something that happened at a high school party, she no longer speaks. The book is amazingly well-crafted. All the people, parents, teachers, and friends, are completely oblivious to what she’s going through. The book is absolutely powerful.

Recently, this book was ludicrously condemned as “soft pornography.”

Liz Burns at A Chair, a Fire, and a Tea Cozy, has recently posted some thoughtful and excellent posts in reaction. First, about the issue of condemning books in reviews. Second, about what we are saying about other books when we call certain books “clean.”

As a librarian, I am strongly against censorship. As a conservative Christian, I understand where some parents are coming from, but I strongly believe that if a child isn’t ready for it, he or she won’t be interested. And there are difficult issues out there in the world. Isn’t reading a book a better way for your child to deal with them before they actually have to face them? I also strongly believe that there’s no better way to build empathy into a person than to get them to read — They can learn to see the perspective of both the villain and the victim. But if you stick to material that offends no one (Does such material exist?), it won’t have much impact.