She talked about how in view of what today is, that it’s good to be with librarians.  We have to transform silence into action, and Libraries do Transform.

We can have empathy for those we disagree with because we all know what it is to have fear.

Begin a conversation across misunderstanding.

Keep hope in the room and in your lives.

Don’t forget to vote at the local level, too.  We do have the power to create change.  It’s important to hold onto history.

We had a mini-Institute because we decided not to meet in North Carolina.  She said, “This country has always messed with bathrooms.”  She’s deeply proud of the Institute organizers for taking a stand, as a person deeply committed to making this place safe across lines.

These conversations are disruptive, but healing.  Healing begins by being willing to talk with people.

Conversations can begin in the library.

You’re so much stronger than you think you are — because look at the history that got you here.

Writing is a way of healing, a way to make sense out of this journey.

When you tell your story, some will be eager to hear who you are. 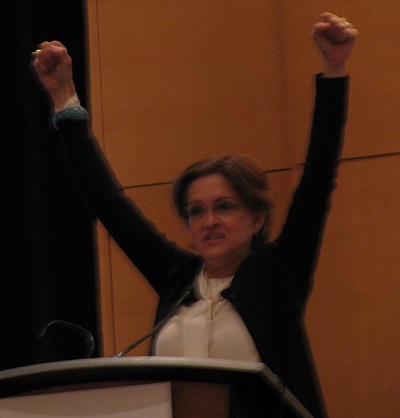 Carmen Agra Deedy was our lunchtime speaker at ALSC Mini-Institute today, so I didn’t take notes.

But I can tell you what her talk was about:  Storytelling!

And she told stories to tell us about storytelling.  She kept us laughing, on the edge of our seats, and deeply moved in turn.

She also read from her wonderful new picture book, The Rooster Who Would Not Be Quiet.

The power of words mean everyone can talk.  We each fight the good fight.  In the end, where is your voice?

There is a time to be silent and a time to speak.

There are always those who resist being silenced.

May we be among them!

Going to ALSC Mini-Institute Break-out Sessions was a little overwhelming, because many of the programs presented seemed way beyond the scope of something I could do in my own library.

But I came away challenged, inspired, and invigorated.  I was reminded of the need out there and that Librarians are shining lights and touching people’s lives.

I recently got put as the only librarian on a Neighborhood School Readiness Team — so I chose as my focus programs about getting children ready for Kindergarten, “ECRR: The Next Generation,” “Fighting Intergenerational Literacy,” and “Kindergarten Bootcamp.”

All of them had a focus on teaching parents how to get their own children ready for Kindergarten.  They all have a lot more staff to devote to their programs than I do at my branch — but I think I can move in that direction, and it’s nice to see what big things can be done.

Just a few things that jumped out at me:

From Denver Public Library, I loved their summer activities for Early Literacy, especially their series of Saturday activities with passive programming that’s out all day:  Things like a Box Day (creating things with cardboard boxes), a Mo Willems Day, and Going on a Bear Hunt Day.  They create a setting where the kids explore and play and talk, and the parents get to talk with other parents and be there with their kids.

They also have Play and Explore Centers for babies and toddlers.  Again, the children play and the parents talk.

They’ve got a “Little University” program, mostly bringing in outside groups, but teaching the children in various topics.

They’ve got some YouTube videos of Early Literacy tips with a tip at the beginning, and then an example of carrying it out.

I love what they do with Early Learning Spaces — including 52 activities in English and Spanish, which they put out to do in the library.  An example was a Color Hunt.  (“Look for anything green….”)

They’ve got a central library of Early Learning materials.  I liked the idea of taking giant Legos to outreach events.  Kids can play with the giant Legos while the parents talk with the librarians at the table.

I liked the Mailbox that moves around the library, with varying prompts.  Children write letters to librarians.  Prompts can be as simple as “Say something kind.” Or for MLK Day, “Write about your dream.”

Their approach to parents is: “How can we partner with you?”  They might ask parents to write down a life goal for their child, and then point out that we’re working on that right now.  They honor parents as lifelong curious learners.

The next speaker, Jonathan Dolce, talked about doing Intergenerational Family programs to combat illiteracy.  They meet once a week for six weeks.

He showed books representing diversity and inclusion.  They talk about the books together and do activities based on the books — He gave us examples like making guacamole, watching author interviews, and dancing together.  They call it Family Reading Connection.

The Kindergarten Boot Camp with Phoenix Public Library is a 7-week program targeting children who haven’t gone to preschool, helping the parents learn how to help them get ready for Kindergarten.

All their outcomes are about the parents’ behavior.  And the curriculum was developed based on the state standards for Kindergarten.  They developed it with a staff member who is a former Kindergarten teacher.  They have a program for certifying the additional staff who offer the program.

Between all three of these programs together, I tried not to get overwhelmed, but I was prompted to think about what ways my own library can do more to help parents actively prepare their children for Kindergarten.

Today was my first day at ALA (American Library Association) Midwinter Meeting and the ALSC (Association for Library Service to Children) Mini-Institute! 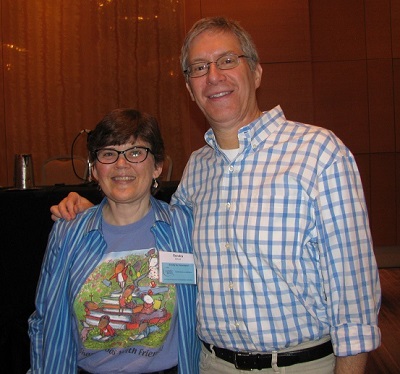 I’ve agreed to blog about the conference for ALSC, so my conference posts will happen in both places.

I was extra excited to go to Breakfast for Bill this morning, because I wore my Kevin Henkes t-shirt that says “Share Books With Friends”!  And I got a picture with him afterward.

The breakfast featured Kevin Henkes and his wife Laura Dronzek, as well as another married couple, Erin Stead and Philip C. Stead.  All four of them were delightful to listen to.

Kevin said that a high school teacher told him, “I wouldn’t be surprised if some day I see a book with your name on it.”

He’d always known he wanted to be an artist, but that inspired him.  If someone else believed in him, it made it easier to believe in himself.

On the other hand, for Erin, art school professors discouraged her because they said she needed to do her art differently.  But her husband kept her going.

For Philip, a teacher handed him a pamphlet showing how Where the Wild Things Are was made.  That made him realize making picture books was something you could do.  He had a single-minded mission from there on out.  (Erin commented, “Phil has this ability to will things into happening.”)

Both Kevin and Philip talked about the joy of letting go of a picture book text and passing it on to another artist.  (This is less easy to do when the illustrator is their wife.)  They both get excited to see what the other will do with it.  Erin thinks it’s easier for them to do because they’re illustrators themselves.  They are able to let go of their vision of the work and completely give it over.

Talking about specific books, Philip said he doesn’t like the question as to whether Ideas Are All Around is a book for children or adults.  It’s a book for some children and some adults.  As a kid, he was nervous about coming up with his own ideas, and it would have been nice for him.  Coming up, he’s doing a book called All the Animals Where I Live, which is its spiritual sequel.

They talked about Erin’s book coming up called Tony.  Philip found the text in a local paper in Nashville.  It’s a lovely and simple poem, and he thought it was the perfect picture book text, leaving exactly the right amount to the illustrator.  When they contacted the paper, the author had just passed away at the age of 96.  But their publisher was able to get the copyright.  It’s Philip’s favorite book Erin has ever made.  (We saw some of the art and it’s just lovely.)

Kevin and Laura have a book coming out, In the Middle of Fall.  It’s a companion to When Spring Comes.

Then questions came from the audience, so responses are a little more disjointed.

I like this quotation from Philip: “I’m consistently floored by how special a picture book is to a child who doesn’t have books at home.”

They were asked for titles of 3 picture books they’d give to every child if they had the chance.  They went with titles from their childhood.

Philip:  The Snowy Day, by Ezra Jack Keats; Sylvester and the Magic Pebble, by William Steig; and Swimmy, by Leo Lionni

Erin:  The Snowy Day, by Ezra Jack Keats; Frog and Toad Are Friends, by Arnold Lobel; and Where the Wild Things Are, by Maurice Sendak

Laura:  The Snowy Day, by Ezra Jack Keats; The Little House, by Virginia Lee Burton; and Mr. Rabbit and the Lovely Present, by Charlotte Zolotow, illustrated by Maurice Sendak

Kevin: The Little Fur Family, by Margaret Wise Brown, illustrated by Garth Williams; Is This You? by Ruth Krauss, illustrated by Crockett Johnson; and Rain Makes Applesauce, by Julian Scheer.

The last question got Erin talking about a new book that she’s not allowed to talk about, but check a big newspaper this weekend!  She started writing it two years ago, but there’s a character who’s a bullying tyrant.  It has a message that seems timely:  “Be nice to each other, for gosh sakes!”

It was a nice way to wrap up a lovely time with people who love the works of art that are children’s books and respect the child reader and want to bring light and goodness into the lives of children through their work.