2012 ALA Annual Conference is done, and I have lots of notes to share! Since I’m way behind on writing up my notes from Midwinter and from PLA, I decided to work backwards. When I finally get to notes I’ve already shared I’ll be done. The goal will be to post at least one Conference Corner post each week, but maybe I can do better. I’d like to catch up before KidLitCon in the Fall or maybe the Horn Book at Simmons symposium or maybe VLA Conference. (Now that my son will be in college, there are so many possibilities!)

The final event for me at ALA Annual Conference this year was the Printz Awards Reception. I always love the Printz speeches. I love it that everyone gives a speech, honor winners and the big honcho award winner. They always make sure to say nice things about libraries and librarians, so their words are treasured.

The night began, not surprisingly seeing who got the Honor award, with comedy. Daniel Handler and Maira Kalman gave a speech together thanking us for the Honor for Why We Broke Up.

Then Daniel Handler played the accordion and sang “Without Libraries We’d be Dum,” with special effects by Maira Kalman. This is worth experiencing!

I got a picture with Daniel Handler at the reception. He seemed pleased that he got it to come out looking like someone had pasted him in. (Maybe I did?) 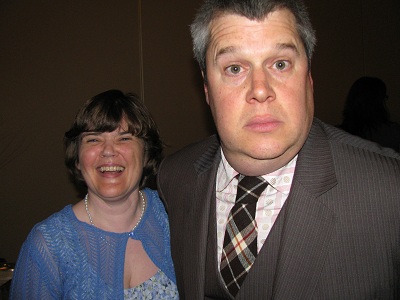 Next Honor winner was Christine Hinwood for The Returning. She told a great story of finding out she’d won an Honor. She had been without internet access and found out on a train. She said she broke all the rules of British train riding and danced down the aisle.

She said, “Teenagers are people, too.” She writes for people.

She also spoke up for the power of fantasy novels. “The fantasy books she read as a child are not childish.” “Fantasy allows exploring issues. . . without baggage.”

The Returning explores issues about war. How do combatants go back to family and a day job once the war is over? So many are affected by war for so long after the war is over.

Craig Silvey was the next speaker, honored for his book Jasper Jones.

I got a picture with him. He has an adorable Australian accent. He said that YALSA has been “absurdly kind to Australians” in their award choices. Many of us firmly believe it’s to get to hear their accents at the Printz Program. 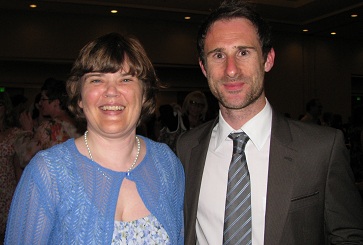 (Oh look! I think that’s Christine Hinwood right behind me.)

Craig Silvey was quite ill when the Printz call came. He “let it ring out” twice, but finally answered this persistent caller. In his brain-addled state, his first thought was, “Oh my goodness. I’ve been honored by Prince.?” Fortunately, the committee gave him more information before he could follow up on this thought.

Like so many Printz Honorees, he talked about growing up in the library. I liked this line about reading fiction: “The truth, I found, was hidden in the lies.”

He talked about accidentally checking out A Clockwork Orange when he was ten years old. “I learned a very valuable lesson: Stories were powerful.”

Next up was Maggie Stiefvater, honored for the book I loved so much, The Scorpio Races. 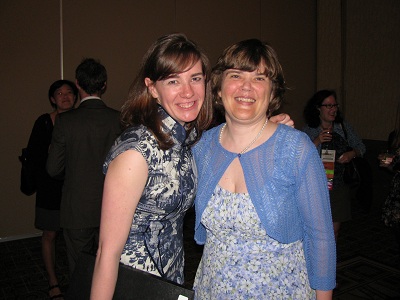 Maggie Stiefvater also talked about the power of Fantasy. She began with a reading from Diana Wynne-Jones. 10-year-old Maggie thought the food described was wonderful. And yet it didn’t exist. It was imaginary.

For a truly great book, Maggie Stiefvater wants a book with another world inside it.

What makes us believe in a place? Diana Wynne-Jones showed the symptoms of a culture. It was the little things.

“Thisby is a big place made of tiny little sensations.” 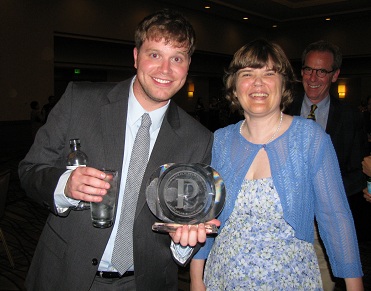 He, also, had some great things to say about books, reading, teens, and libraries.

“You connect teens to worlds beyond their imaginations.”

John Corey Whaley found the story he was supposed to tell. “Listen closely when you open the book and you may hear the faintest sound of banjos.”

His book asks the question: “Is it possible to grow up in an impossible world?”

Talking about writing, he said, “Don’t we all want to make some dent in the side of the world?”

“Teens want the truth about everything, and they know exactly when they aren’t getting it.”

And he closed off with a rallying cry for libraries: