Now, the motivation was that when the math community found out about my Prime Factorization Sweater, many commenters said I should make a T-shirt. I “happen” to have several of the charts already created in Word, because I’ve written a children’s book about using these ideas to learn about other mathematical bases and make cyphers and patterns using the mathematical principles. So I used two of those charts to make a shirt. But I did want to see if the colors came out distinct enough before I offered it for sale.

Monday night, the shirt I ordered arrived, so I wore it to work yesterday: 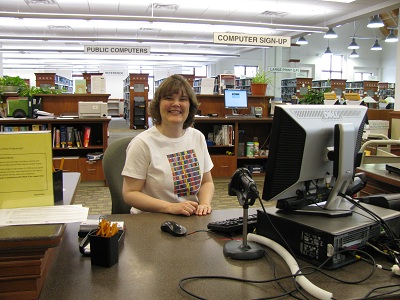 And here I am among the Math books: 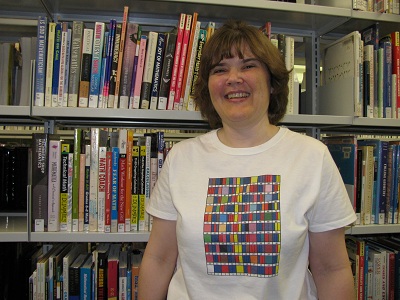 On the back, as with the sweater, I’ve got rows of 8, so you can see that the patterns change. 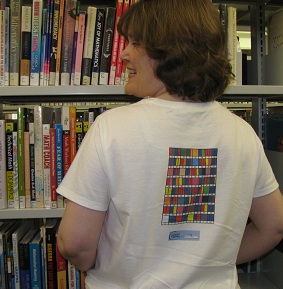 Now, there were two things I wasn’t quite happy about with the shirt.

First, one thing I was happy about was that the colors came out exactly as they looked when I printed out the charts. However, that was also the first thing I was not happy about. The blue shade for 2, on my computer screen, is nice and bright and easy to spot. On the print-out, and on the shirt, it looks much darker.

The second thing I was unhappy about was that the numbers were blurry. This was because I hadn’t been able to save my Word table as a jpeg file. My son came up with the solution of taking a screenshot and merging the two pictures into a jpeg. It was good enough, but I really noticed the little imperfections.

Then, at work, wearing the shirt, I had a brainstorm. Surely in publisher, you can turn files into jpeg files? Sure enough! So yesterday evening I went home, opened my book manuscript, and pasted the prime factorization table into publisher. It worked! My test shirt hasn’t arrived yet, but I’m confident the numbers will be more clear.

While I was at it, I changed the colors, and lightened up some factors that are used several times in the chart, particularly the blue for 2. Since my graphic looks different when it’s printed, I’ll post a picture of how the print-out looks, because that’s how it will look on the shirt: 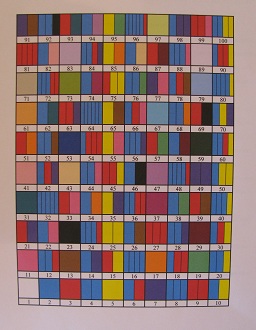 I also added various colors, by popular demand. I now have a Caribbean Blue shirt on order with the new charts.

One other thing I should mention. For “Super Geeks” (like me), I did put rows of 8 on the back. All the charts have the numerical values under the color code, but on the back, I gave those numbers their Octal representation. So after 7 comes 10, after 10 comes 11, after 17 comes 20, after 77 comes 100, and so on. A couple times, when I was looking at the back, I forgot I was looking at the back and thought I had factored incorrectly! With the colors, you could use this as a handy-dandy way to convert from decimal to octal! (Just what everyone needs, right? But if you’re ever on an alien planet….) 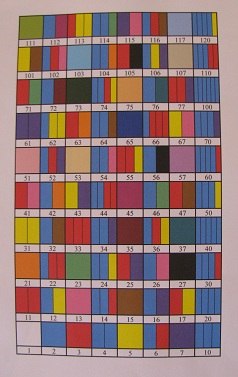 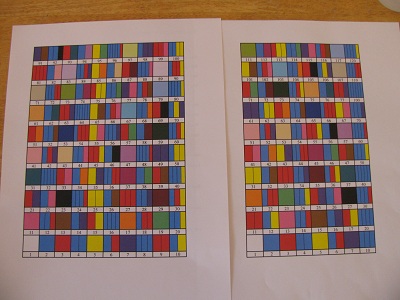 So, I’m looking forward to my new shirt coming in! And I do feel ready to offer my shirts for sale!