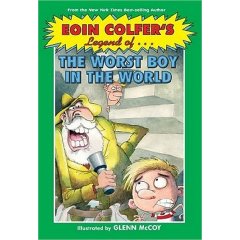 Eoin Colfer’s Legend of . . . The Worst Boy in the World, illustrated by Glenn McCoy

It’s not fair.  Whenever something bad happens to Will, no one will even listen to him tell about it.  He has four brothers.  If he wants to complain about something to his Mom or Dad, there are usually at least two brothers in line ahead of him.

Will says, “All this complaining means that by the time Marty and I get home from school with our troubles, there is usually a little brother perched on each of Mom’s knees, moaning about their baby problems.  And even if, miracle of miracles, there is a free knee, Mom is usually on auto-nod by then anyway.  Auto-nod is when grown-ups don’t really listen to what a child says, they just nod every five seconds or so until the child goes away.”

So it seems like a great thing.  Only whenever Will thinks he really has a terrible story, Grandad completely tops him.  For example, one week the barber slipped when he was trimming the back of Will’s head with electric clippers and shaved a bald strip right up to his crown.  When he told Grandad about it, Grandad took off his cap and showed him where a shark had bitten him on the head.

Will was completely frustrated, so he decided to do some research.  It turns out that when Will was only two years old, his brother Marty, at three years old, almost managed to get rid of him for good.

What’s the worst thing a three-year-old could do to a two-year-old?  What plot would get him out of the house, away from Mom and Dad, and almost do him in forever?  That, my friends, is the Legend of the Worst Boy in the World.

This review is on the main site at: