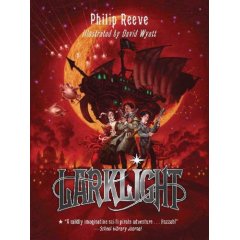 Or:  The Revenge of the White Spiders!

Or:  To Saturn’s Rings and Back!  A Rousing Tale of Dauntless Pluck in the Farthest Reaches of Space!

Imagine for a moment that outer space is not a black emptiness, but really the “aether,” and full of living things.  Imagine that there’s life on Mars, life on Venus, life on Saturn, and even “ichthyomorphs” floating in the middle of space.

Now imagine that instead of just discovering gravity, Isaac Newton used alchemy to figure out how to make spaceships.  Imagine that in the 1800s, the British Empire wasn’t just an earthly empire ruling the seas, but ruled the solar system.

Art and Myrtle Mumby grew up on Larklight, a large old house that orbited the moon.

At the start of the book, their house is attacked by space spiders the size of elephants.  Their father is captured by the spiders, but they manage to escape and land on the moon.  On the moon, their life is in danger from giant moths, but they are rescued by space pirates.  The captain of the pirates is a teenage boy, but the crew are all aliens.

The pirates don’t want to obey Myrtle’s demands and take them to a British Embassy, and the children’s adventures are only beginning.  The book presents narrow escape after narrow escape as Art and Myrtle travel the solar system and end up saving the world.

This story is indeed a “rousing tale of dauntless pluck.”  I was put off at the beginning because I hate the thought of giant spiders, but before long I was lingering in my car to listen.  Even though I knew Art would surely escape, several times I found myself wondering how on earth he would get out of the latest tight spot.

Once again, I was enchanted by the delightful accents of the British narrator.  This audiobook would be a fabulous adventure to listen to for a family traveling on summer vacation.  Although there are some fearsome situations, Art and Myrtle emerge unscathed from them all.  Great fun!