I’m excited! My little brother Robert’s wife is having a baby. Since Robert is even more mathematically minded than I am, if that’s possible, I definitely think his baby needs a prime factorization blanket. I had to laugh, though, because when I told him this instead of expressing gratitude, he said, “Okay, but we’ll have to talk about the representation of 0 and 1.” I remembered that a long time ago when I showed him my prime factorization sweater, he told me that he thought the rows should start with 0, 10, 20, and so on.

Now, I don’t want to include 0. Primes and composite numbers are properties of the natural numbers. But then I had a brilliant idea: Why not leave a hole for zero? Now to figure out how to work that in.

Mind you, I wasn’t prepared to make another grid like my original sweater. I wanted to do something different, and I didn’t want to have to have several colors dangling as I knitted each row. I also didn’t want to use stripes like my prime factorization scarf or the prime factorization cardigan I’m working on. To make a wide enough blanket, that would take far too much yarn. That’s what gave me the idea of using entrelac, that and a brand new book I’d had sitting in my house for a few months called Entrée to Entrelac, by Gwen Bortner.

I ended up making three swatches. Now, there are things I don’t like about all three swatches, but I think I learned enough to decide how to make the blanket. The only decision left is what colors to use. I don’t think they know the gender yet, so I probably won’t use blue or pink for 2 or 3. (Though maybe if I used blue for 2 and pink for 3 it would work for either gender — but I’ll probably go with yellow and green if they don’t know in the next few days.)

I planned to use Cotton Classic, the same yarn I used for my original sweater, because I can use the leftover colors from that sweater for a lot of the larger value factors, so I won’t have to buy that much additional yarn. On yarn.com they had a sale on Cotton Classic, but no off-white, so I’ll go with a white background, which is nice for a baby blanket (though it won’t stay clean — but that’s their problem, teehee). Of course, that’s what I thought, but the total (for some additional colors) was a lot more than I’d usually spend on a baby gift, but I’m going to have so much fun with it, it’s totally worth it.

I decided the easiest way to break a block into factors would be to have 12 stitches and 24 rows. (Entrelac normally has twice as many rows as stitches.) This would divide naturally for 2, 3, 4, or 6 factors, and I can work something out for 5 factors.

The first swatch I made half that size because I didn’t want to do an enormous swatch. I made it base 4. I used white triangles on the outside and a hole for zero. Before I even show the swatch, I’ll say the things I didn’t like:

The hole didn’t work out very well. It wasn’t going to be very stable. I didn’t like the way the border triangles came out, and I didn’t like using white in between factors — too many yarn ends. It all curled way too much. The colors didn’t make me happy, and I knew I wasn’t happy with it. Here’s that first try: 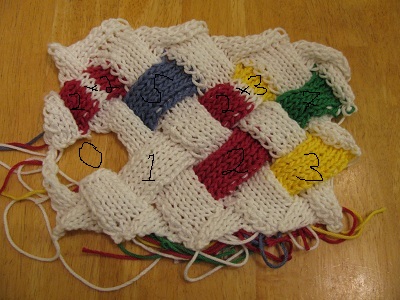 Okay, I decided to get rid of the triangles and just use white rectangles on the outside and just leave one corner missing for zero. I also decided to make the swatch full size with 24 rows, not 12 like the previous. And I decided to try the wool/acrylic blend I used for my prime factorization scarf. Here’s how the second swatch came out: 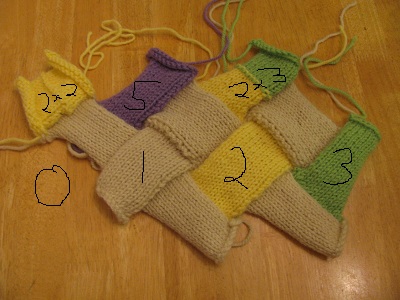 What I did like about this swatch was using a ridge instead of a band of white between factors. Much easier and will involve less ends to sew in. The yarn was softer, but it would make a much bigger blanket, and I thought I’d rather use the cotton after all. I decided the outside white rectangles were completely unnecessary. The biggest thing I didn’t like was that the edges were curling way too much.

So the kind of obvious solution for curling edges? Use garter stitch instead of stockinette. A bonus is that then it will be easy to count ridges to divide up a block. I’m very happy with everything in the last swatch (this time base 3) except the particular choice of colors. (I hate that orange! And the green shade didn’t turn out very lovable.) Instead of a ridge where there are factors, I’ve got the lack of a ridge. I think this might work! 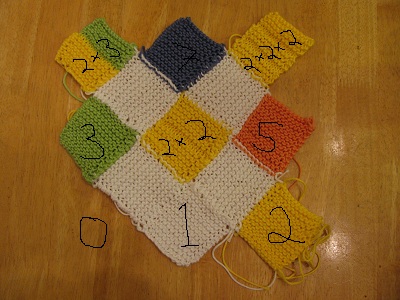 I should mention that the actual blanket will be rows of 10, but I wanted to work out the overall scheme with less.

The most lovely thing about doing the blanket in entrelac instead of intarsia, like I did the original sweater, is that I can knit one number at a time, and I can do it in order! So I don’t even have to plan it all out ahead of time, I can just jump in and knit! So — I will be knitting the rectangle for 1, and once I finish that, I will have to make a decision about the color to use for 2. Will I find out the baby’s gender before I begin? Either way, it’s going to be a unique and beautiful blanket, if I do say so myself.