Tonight my plan was to post Sonderling Sunday on Harry Potter and the Philosopher’s Stone looking at the translations in German — and French!

But instead, I took a longer Sunday afternoon nap than planned. And then my sister called. To say the traditional “Tomorrow we can say tomorrow is Christmas!” Yay! And then our Cybils Round One chat went way longer than I thought it would.

So next week I will plan to do an unusual tri-lingual Sonderling Sunday.

But meanwhile: The Cybils: What fun! 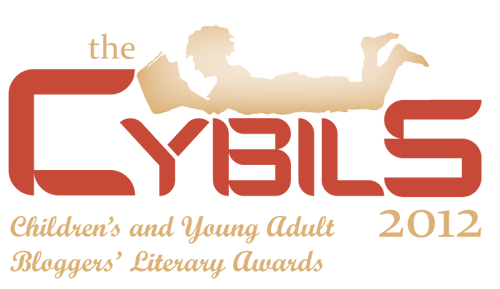 I’m on the Cybils Round One panel for Middle Grade Science Fiction and Fantasy. So I’ve been reading like crazy. And still feel like a slow reader compared to the others. We had at least two people read every title nominated — at least read enough to know if they needed to read on, anyway. And we all read any title that anyone shortlisted. Or at least we will have come very close to that by the time we finalize the list.

Round One is fun because you get to read widely, and you’re going for a list, so you don’t feel too bad if one you don’t like ends up on the shortlist. If people you trust loved it, it’s probably got a lot of merit. We found our group doesn’t have a whole lot of consensus — and we haven’t made a final list yet, but discussing these books is a lot of fun. It’s always a fun challenge to be able to come up why you like or dislike a book.

The Cybils strives for a combination of literary merit and kid appeal, so besides coming up with what we like or dislike, we also tried to figure out where that was from good or bad writing and which things would matter to kids.

This is much more than my reviews. In my reviews, I admit I like to focus on recommending books and telling what’s to like about them. It’s kind of fun to tear apart books I don’t like — in the privacy of a committee where most people will never ever see it. I hope I won’t like it so much that I do that sort of thing more widely! But there is some value in figuring out precisely where a book fell short. And was it a flaw? Or simply a personal preference?

I warned them in advance, and it proved to be true: My demon is internal logic. If a fantasy book has problems with the internal logic, it really really bugs me. There were a couple books that, to me, really dropped the ball at the end. I didn’t believe the characters would act that way, or I didn’t believe the magic would work that way. And there was one that I thought was lacking in explanation of the fantasy all the way along.

But it’s nice that I’m just one person on the panel. So my personal preferences and idiosyncracies won’t dominate the list, just influence it. I think we have a nice variety of viewpoints and preferences in our panel.

We now have settled on only one book that will definitely be on our shortlist. (Not that any of us think it’s the best — just that there was one book we all agreed on.) We have several to keep for now to discuss later, and we have several more that we sent to a corner with cookies to possibly come back if the list needs rounding out. We’ll be reading and rereading and discussing again later this week.

And we will announce our shortlist to the world on January 1st! Stay tuned!

And don’t forget to tune in next week to look at Harry Potter #1 in British, German, and French!