I remember I read some of Mercedes Lackey’s books before I ever started writing Sonderbooks in 2001. The only one that stood out as exceptional to me was Firebird. That one’s a fairy tale retelling, so perhaps it’s not surprising that when Mercedes Lackey began her Tales of the 500 Kingdoms — all playing off of fairy tales — that’s when she consistently got counted among my favorites. I’ve always enjoyed fairy tale retellings, and I love these. So often, they point out what’s odd about the fairy tale, and play off the Tradition with humor and insight and a whole lot of fun.

All of the five stand-outs are from the Tales of the 500 Kingdoms. The first one, 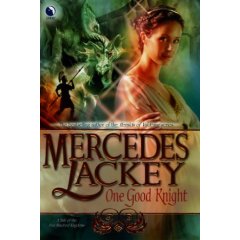 The Fairy Godmother, sets the stage for all the rest. Apparently, I was still holding out when I first read it, since it wasn’t a 2004 Stand-out. But with the next book, One Good Knight, she hit the 2006 Sonderbooks Stand-outs at #3 in Romance Fiction.

In my 2007 Sonderbooks Stand-outs, she ranked even higher with Fortune’s Fool at #2 in Fantasy Fiction. (That was the year I didn’t get all my reviews of stand-outs written.)

I remember I liked the books so much, I purchased the next book, The Snow Queen — and then neglected reading it because it didn’t have a due date like all the library books I had checked out. When I finally got around to reading it, it was a 2011 Sonderbooks Stand-out, coming in at #4 in Fantasy Fiction.

This past year, I decided it was time to catch up on the series. (Of course, I was sad when I had done so. I liked knowing there was another one of the books out there I could read.) Both were 2012 Sonderbooks Stand-outs in Fantasy Fiction, Beauty and the Werewolf taking #2, and Sleeping Beauty at #3.

This series doesn’t necessarily have to be read in order, though you might want to start with The Fairy Godmother, which lays the groundwork. But they are all so much fun, you won’t want to miss any!