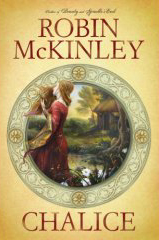 Chalice is a new Robin McKinley book in the tradition of Hero and the Crown and Beauty.

As always, Robin McKinley is a consummate world-weaver.  The magic in the world of Chalice isn’t quite like any fantasy world I’ve read about before, but is presented smoothly and beautifully, through story rather than explanation.  In this land, demesnes are held by a Circle, composed of the Master, the Chalice, the Grand Seneschal, and nine others.

Willowlands lost both Master and Chalice in one disaster, and Mirasol, chosen as the new Chalice is woefully ill-prepared, but perhaps more prepared than the new Master.

Their new Master was coming home: the Master thought lost or irrecoverable.  The Master who, as younger brother of the previous Master, had been sent off to the priests of Fire, to get rid of him….

The priests of Fire said they would see what they could do, but they promised nothing.  The younger brother of the old Master had just crossed into the third level, and by the third level Elemental priests can no longer live among ordinary humans.

But six weeks ago the Grand Seneschal had received another message from the priests of Fire:  that the Master of Willowlands was coming home.  It would not be an easy Mastership, and the priests were not sure it was even posible, but the Master himself felt the responsibility to his demesne, and he was determined to try.

Mirasol was a beekeeper long before she was Chalice.  She holds her Chalice in honey, the first Chalice to do so, rather than the usual water or wine.  Her bees become unusually responsive to her as she learns her role.  She hears the earthlines and mends the rifts in the land of the demesne, trying to recover after seven years that the new Master’s older brother abused it.

Can Mirasol, inexperienced and unapprenticed, learn what she needs through books?  Enough to help the land adjust to a Master who was so far along in the Fire Priesthood that he burns her hand when he brushes against it to take the Welcome Cup?

As in some of her other books, the main weakness is that the action is mostly internal.  Several important incidents are told through flashbacks, losing some immediacy.  Even as the action was reaching a climax, we read, Many years later her memory of the week before the faenorn was that — till the very last night — she had no sleep at all, except in those moments between blink and blink when you are so tired that you fall asleep standing up with your eyes open and wake again by finding yourself staring at the thing in your hands that you had been staring at just a moment ago.  That sentence gives away that Mirasol will live through the events at the end of this week and makes the reader feel like she is looking back on the events, rather than currently experiencing them.

What’s more, like Aerin of The Hero and the Crown, like Jake of Dragonhaven, most of Mirasol’s work is done alone, and there are many things she must figure out on her own.  So instead of scenes with dialogue, these moments end up being long passages telling about Mirasol’s thoughts or solitary actions.

Mind you, no one tells someone’s thoughts more lyrically than Robin McKinley!  Chalice is truly a wonderful book that catches you up into another world.  I would love for her to write a sequel.  And I will never look at bees or honey quite the same way again.