Yesterday, we had a Math program at the library. Today, a program for exercising critical thinking. Both were all about having fun. 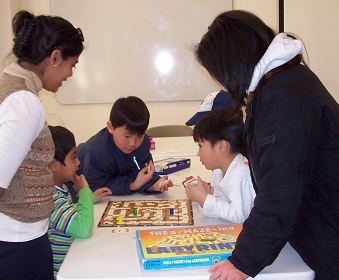 I have to laugh about today’s program, though. I’ve done the same thing in the past and called it “Board Game Bash.” Those times, I got about four kids to come and play board games.

Today’s program was during Spring Break, which I’m sure really helped. But it also helped that I called it “Brain Games at the Library” and I offered prizes — gently used books from donations made to the library and from advance reader copies that I had. But I suspect that parents in this area were a lot more interested in a program that promised to build their children’s brain power.

And it wasn’t a false promise! We had more than 20 kids show up and play! The big hit of the day was Labyrinth. I’m finding the perfect game for this kind of program is one that’s simple to explain and has an intriguing visual element. In Labyrinth, you slide a piece into the board, changing the maze and knocking another piece out. The path constantly changes, and you try to collect treasures from the card and so navigate through the maze to the treasure you want to collect.

Make 7, which is like Connect 4, but in which you try to add the value of your pieces up to 7, was also easy to understand and popular. Yikerz, with powerful magnets that you try to place without popping them together caused some tension and fun. Some kids played Rollit, some played Pass the Pigs, and some played Mastermind. And this time I did get some kids to try my three-way chess set from Poland.

Where’d we get the games? Well, I confess, for a very long time I’ve had a weakness for buying games. And now with my kids no longer at home, this is a great way to spread the fun around.

I still adamantly believe that playing games with your kids is one of the best possible ways to learn math skills and critical thinking skills. And the library is the perfect place for that as well, since the library is where you learn for the FUN of it!

I also loved that every time they won a game, the kids grabbed a book from the book box. Books that are prizes are all the more valuable!

We’ll be doing more of these programs, probably once a month through the summer. It’s easy for me to run, since I only need the time to set up and run the program, but don’t have to plan what to say. And I walk away smiling, just like the kids do!