So, I’m still in the process of moving in. I love my new home, but I am getting a shorter fuse regarding all these boxes. And annoyed with the things I can’t find. There’s no telling where my DVD remote is. And after watching Episode 1 of Downton Abbey, Season 3, I discovered that I can’t skip an episode or even fast forward without that remote. So I watched Season 1 of Sherlock instead, this time not shutting off the DVD player after I watched Episode 1. I hope I find the remote before my hold on Downton Abbey comes in again!

Yes, I’m trying for a box or two a day, but what I really need is some concentrated time. The first weekend here, I had to spend moving out of my old place. The next weekend, I bought balcony furniture and flowers (*So* worth it!). 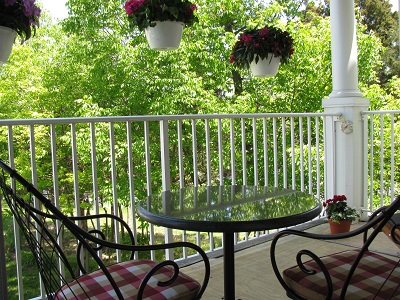 And this weekend, I picked up my son from the finish of his first year at William & Mary and spent some time with him for Mother’s Day. Also totally worth it!

But I need some concentrated time! I was thinking about the 48-Hour Book Challenge that Mother Reader usually hosts the weekend after Memorial Day. Well, this year she’s not hosting it, but I think I will probably do it anyway, at least in a low-key way. I’d love to catch up on some reviewing, and it always is such a privilege to set everything else aside and say, “I can’t do that. I’m reading!”

However, I think next weekend, I will hold my own personal Unpack-a-thon. Or perhaps I’ll call it my own 48-Hour Unpacking Challenge. I’ll see how many hours out of 48 I can spend unpacking — and then see if I can match that number in the Book Challenge. Just to get some of it *done*.

For example, I can’t do Sonderling Sunday until I find my German books. I *think* I know which boxes they’re in, but I need to actually open those boxes.

So today, for Mother’s Day, after a nice nap, I will have my son take me out to eat, and then we’ll play the game he bought me, Twilight Struggle, a game about the Cold War. (The first time we played, I “won” when nuclear war started on his turn.) But next week, after my Unpack-a-thon, I’m hoping I’ll have some German books out and be ready to start up Sonderling Sunday again.