I did it! I devoted 9 hours to unpacking last weekend. I unpacked 32 boxes and 13 bags.

I still have a loooooong way to go!

And it’s already nice to have room to walk around in my kitchen! And to have found some things that were missing.

I ended up, except for the last hour, rotating between the rooms I was working in, starting each hour in the kitchen. So here’s how it went:

In the kitchen, I unpacked 7 boxes and 7 bags. Here was the before picture: 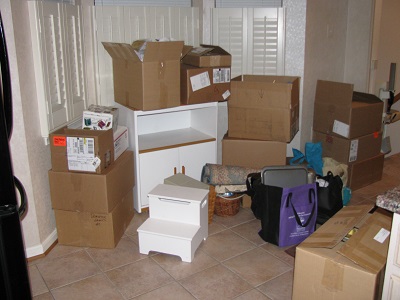 And here is the After picture: 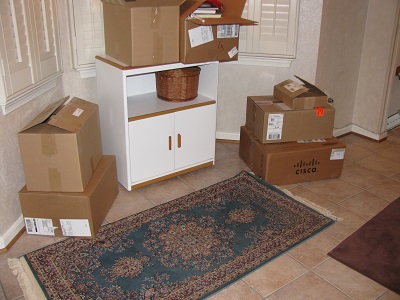 Of course, the main kitchen is a galley kitchen, and I didn’t picture the boxes on shelves, or the four boxes still stacked right outside it. But good progress was made!

Next, each hour I worked on unpacking games, which went in my son’s closet. That is, until the last hour, when I focused on only that, and FINISHED the task! Woo-hoo! All games are stored, besides the ones I brought to the library for our monthly “Brain Games at the Library” program. That program is now well-stocked!

This involved unpacking 10 boxes. Here were some of them Before: 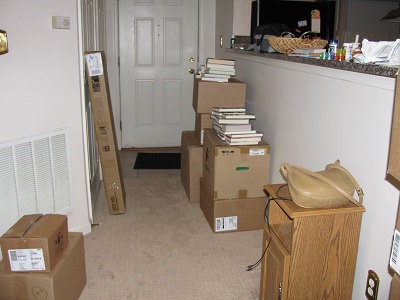 And the entryway is much clearer After: 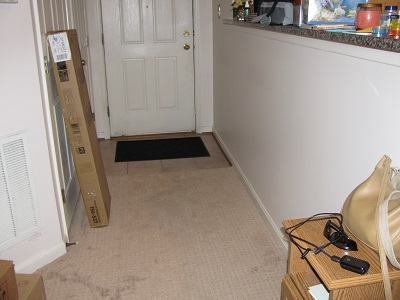 Next on the list was the Living Room. I unpacked 10 boxes, mostly books, and 2 bags. They mostly went on my biggest bookcase: 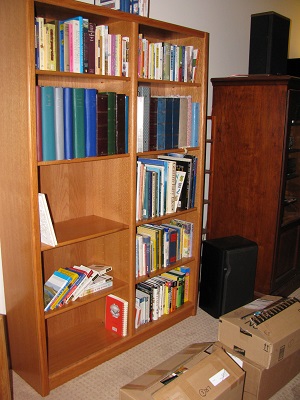 Then I worked on my Office. I unpacked 5 boxes in that room, including some books: 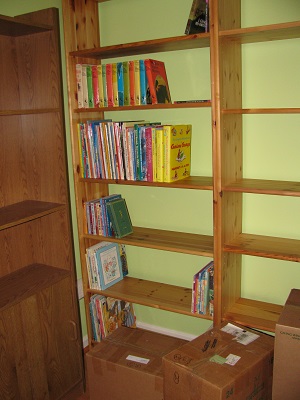 Last in the rotation was the Master Bedroom. I only finished unpacking 4 bags from it. These took a bit longer, since I got rid of a sweater chest that had a broken drawer, and I’m trying to figure out where to put everything. Progress was made, but not worth photographing.

Anyway, my theory is that, knowing I’ll be doing lots more next weekend, I can get back to blogging and posting reviews during the week.

I am finding that driving just a bit farther in stop-and-go traffic instead of a freeway *really* makes me sleepy. I was hoping stopping the migraine preventative I’d been trying would clear that up, and maybe it still will, but all that is to say tonight I laid in bed for an hour after I got home, and then I had some bills to pay. (I made my *first* mortgage payment! What a big girl I am!) So — I hope to start posting reviews again *tomorrow*!

But it was nice to come home to a little bit less clutter of boxes. And remember that I really am happy with my new home.